EAST LANSING, Mich. — Contrary to past research, private school students in India do not outperform their counterparts in public schools, finds a new study by a Michigan State University education researcher.

The study challenges the claim that private schools are superior – a hot issue in India and other developing countries that are expanding K-12 educational offerings. During the past decade, some 40 million children have entered India’s education system, giving rise to a growth in privately run schools.

“Our study finds no consistent benefit of attending a private school,” said Amita Chudgar, assistant professor of educational administration. “The main implication is to recognize that the debate is not settled regarding public and private schools.”

Chudgar analyzed the reading, writing and math performance of 10,000 Indian students aged 8 to 11. Because private-school students generally come from families with higher income and education levels, she narrowed the research sample to private and public school students with similar backgrounds.

The study, which appears in Economics of Education Review, found that private school attendance is not associated with any systematic and specific benefit in terms of increased student achievement. Chudgar said the results hold for rural and urban areas of India, and for both expensive private schools and low-fee private schools. 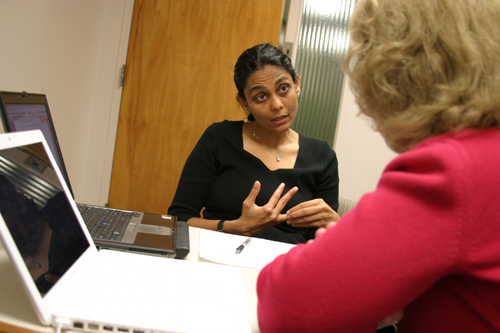 Unlike in the United States – where a raft of research has produced mixed results in the public vs. private school debate – only a handful of studies have been conducted on the burgeoning Indian educational system, and those studies have favored private schools.

But it’s important to keep researching and discussing the issue, Chudgar said, as the public and private schools attempt to deal with the massive influx of new students.

“There’s a perception among some that a child will enjoy better educational outcomes simply because she or he attends a private school, even a low-fee private school,” Chudgar said. “But we hope for a more robust conversation on the benefits and limitations of privatization in the developing world.”

Elizabeth Quin, a doctoral student of economics at MSU, co-authored the study. The study was supported in part by the Institute for Education Sciences, the research arm of the U.S. Department of Education.