COLUMBUS, Ohio — According to a new study, smoking causes the body to turn against its own helpful bacteria, leaving smokers more vulnerable to disease.

Despite the daily disturbance of brushing and flossing, the mouth of a healthy person contains a stable ecosystem of healthy bacteria. New research shows that the mouth of a smoker is a much more chaotic, diverse ecosystem—and is much more susceptible to invasion by harmful bacteria.

As a group, smokers suffer from higher rates of oral diseases — especially gum disease — than do nonsmokers, which is a challenge for dentists, according to PurnimaKumar, assistant professor of periodontology at Ohio State University. She and her colleagues are involved in a multi-study investigation of the role the body’s microbial communities play in preventing oral disease. 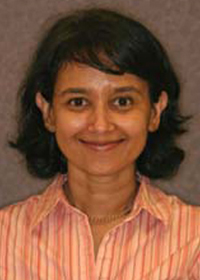 “The smoker’s mouth kicks out the good bacteria, and the pathogens are called in,” said Kumar. “So they’re allowed to proliferate much more quickly than they would in a non-smoking environment.”

The results suggest that dentists may have to offer more aggressive treatment for smokers and would have good reason to suggest quitting smoking, Kumar said.

“A few hours after you’re born, bacteria start forming communities called biofilms in your mouth,” said Kumar. “Your body learns to live with them, because for most people, healthy biofilms keep the bad bacteria away.”

She likens a healthy biofilm to a lush, green lawn of grass. “When you change the dynamics of what goes into the lawn, like too much water or too little fertilizer,” she said, “you get some of the grass dying, and weeds moving in.” For smokers, the “weeds” are problem bacteria known to cause disease.

In a new study, Kumar’s team looked at how these bacterial ecosystems regrow after being wiped away. For 15 healthy nonsmokers and 15 healthy smokers, the researchers took samples of oral biofilms one, two, four and seven days after professional cleaning.

The researchers were looking for two things when they swabbed subjects’ gums. First, they wanted to see which bacteria were present by analyzing DNA signatures found in dental plaque. They also monitored whether the subjects’ bodies were treating the bacteria as a threat. If so, the swab would show higher levels of cytokines, compounds the body produces to fight infection.

The results of the study were published in the journal Infection and Immunity.

“When you compare a smoker and nonsmoker, there’s a distinct difference,” said Kumar. “The first thing you notice is that the basic ‘lawn,’ which would normally contain thriving populations made of a just few types of helpful bacteria, is absent in smokers.”

The team found that for nonsmokers, bacterial communities regain a similar balance of species to the communities that were scraped away during cleaning. Disease-associated bacteria are largely absent, and low levels of cytokines show that the body is not treating the helpful biofilms as a threat.

“By contrast,” said Kumar, “smokers start getting colonized by pathogens—bacteria that we know are harmful—within 24 hours. It takes longer for smokers to form a stable microbial community, and when they do, it’s a pathogen-rich community.”

Smokers also have higher levels of cytokines, indicating that the body is mounting defenses against infection. Clinically, this immune response takes the form of red, swollen gums—called gingivitis—that can lead to the irreversible bone loss of periodontitis.

In smokers, however, the body is not just trying to fight off harmful bacteria. The types of cytokines in smokers’ gum swabs showed the researchers that smokers’ bodies were treating even healthy bacteria as threatening.

Although they do not yet understand the mechanisms behind these results, Kumar and her team suspect that smoking is confusing the normal communication that goes on between healthy bacterial communities and their human hosts.

Practically speaking, these findings have clear implications for patient care, according to Kumar.

“It has to drive how we treat the smoking population,” she said. “They need a more aggressive form of treatment, because even after a professional cleaning, they’re still at a very high risk for getting these pathogens back in their mouths right away.

“Dentists don’t often talk to their patients about smoking cessation,” she continued. “These results show that dentists should take a really active role in helping patients to get the support they need to quit.”

For Kumar, who is a practicing periodontist as well as a teaching professor, doing research has changed how she treats her patients. “I tell them about our studies, about the bacteria and the host response, and I say, ‘Hey—I’m really scared for you.’ Patients have been more willing to listen, and two actually quit.”