In conversation: George Daniel Mostow, geometer of the Nth dimension

In awarding Yale’s George Daniel Mostow its 2013 Wolf Foundation Prize in mathematics — one of the field’s premier global awards — the foundation offered this crisp assessment: “Few mathematicians,” it said, “can compete with the breadth, depth, and originality of his works.”

Here Mostow, an emeritus professor since 1998, talks about the English teacher who led him to a life in math, the pleasure of family, high-definition opera, and the Nth dimension — as well as the “eureka!” moment at a New Haven stoplight that secured him a place in the history of geometry.

When did it dawn on you that you wanted to be a professional mathematician? 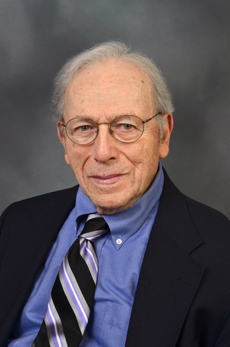 Mathematics is a powerful language not easily translated into in words. Nonetheless, could you briefly describe your discovery of the phenomenon in geometry known as the Strong Rigidity Theorem?

This topic has roots going all the way back to my first publications. My work is related to the concept of congruence. Two objects are congruent if you can superimpose one on the other so there is an exact fit. Most people are familiar with this concept from two-dimensional high school plane geometry. My rigidity theorem says that in all dimensions except 2, two objects of negative curvature, of maximum “local” symmetry, and with the same Poincare group, are in fact really congruent.

Was there a prevailing opinion beforehand that the theorem should be true?

Quite the contrary. The theorem attracted attention because it was unexpected.

You have said that “the final idea jumped out at me as I was waiting in my car at a red light. I get a high every time I pass that intersection.” Can you tell us a little bit more about that moment in New Haven, at the corner of Whalley Avenue and Fitch Street?

Earlier, in my office, I had been thinking intensively about the problem. I did not think about it while I was driving, but at the light, at that moment, I suddenly thought: “Use ergodicity!” [Ergodicity is a concept in dynamical systems theory.] When I got home, I immediately sketched out a path to the theorem. In fact, I only had to add eight pages to what I already had done to complete the proof.

Where were you when you heard you would win the Wolf Prize and how did you
react?

I was sleeping late that morning when my wife woke me and told me that there was a phone call for me. My first reaction to the announcement was “this may be too good to be true.”

Do you plan to travel to Jerusalem in May to receive the prize?

Absolutely. And my family is very excited about the event. My children, stepchildren, grandchildren, and their spouses don’t want to miss it. They will be coming from points spread out from Los Angeles to Haifa.

You share the prize with Michael Artin of MIT. Do you know him or his work well?

I have known Mike for a long time. For many years, mathematicians from Yale and Cambridge, Mass. would meet periodically at The Public House restaurant in Sturbridge and exchange new ideas and mathematical gossip. Mike has been one of the major figures in the reformulation of mathematics known as the Grothendieck revolution, which took place in the latter half of the 20th century.

You retired from the active Yale faculty in 1998, taking emeritus status. But you remain affiliated with the Yale math department and intellectually active. What are you studying these days, either in mathematics or other fields?

I try to keep up with developments in mathematics by reading, attending seminars, and having conversations with colleagues. One of the topics that I am interested in is non-commutative geometry. I also am intrigued by how physicists are applying mathematics in their research.

Aside from math, where are some of your main interests?

Reading history, especially the history of religion. Trying to understand what is the good life and living a good life. It helps to have a loving wife, four children, and their spouses, as well as 10 grandchilden and 14 great-grandchildren, all fascinating. I enjoy singing in a chorus, and attending the high-definition Metropolitan opera performances at Yale. The University’s Koerner Center for Emeritus Faculty — which has a rich program of lectures, films, and parties — keeps me in contact with colleagues from other departments.

What do you remember most fondly from your long career?

I derived much pleasure from collaborating with some of the principal mathematicians of our time. In many cases, our families became close and permanent friends. I also was delighted to receive letters from former students. I remember especially reading a letter from a student who is now an economist, saying: “I am grateful to you for teaching me to think in n-dimensions.”

Could you elaborate on the Strong Rigidity Theorem and what led you to it?

In modern mathematics, we label points in a plane by pairs of numbers, namely their x1 and x2 coordinates. Points in space are labeled by 3 coordinates, x1, x2, and x3. But some data, such as all stock prices at a given moment, require n coordinates where n may be large.

One tool for showing that two objects cannot be congruent is to take certain measurements of one object and take the corresponding measurements on the second, and show that these are different. Sometimes the measurements are intricate: for example, counting the number of closed curves that can be drawn on an object and cannot be shrunk to a point. In counting the number of curves, we count two curves to be the same if one can be pulled onto another. And, we will not count any curve that is a combination of other curves. That count is called the Poincare number of the object. Using the Poincare number is a way to distinguish between the surfaces of a doughnut and a sphere.

There are measurements that describe other features of an object — such as how the object is curved. For example, a sphere in Euclidean space has positive constant curvature. A plane has constant curvature 0. A saddle has negative curvature, which varies from point to point. In addition, there are measurements that describe special types of symmetry that an object may have. My rigidity theorem says that in all dimensions except 2, two objects of negative curvature, of maximum “local” symmetry, and with the same Poincare group, are in fact really congruent.