In ancient fish teeth, a tale of ecological resilience

Microscopic fish teeth may carry a message of hope from an ecological upheaval in the distant past, scientists at Yale University and the University of California-San Diego (UCSD) have found.

An analysis of tooth fossils and shark scales from the sea floor indicates that a massive die-off of species 66 million years ago did not, in fact, leave uniformly dead oceans around the world. In the Pacific Ocean, at least, some small fish species actually flourished.

Known as the Cretaceous-Palaeogene extinction, this massive event at the end of the Cretaceous period killed off roughly three-quarters of the animal and plant species on the planet. In Earth’s oceans, the extinction of phytoplankton created a ripple effect that ravaged prey and predator species throughout the food chain.

“The Pacific just looks different during this period,” said Pincelli Hull, a Yale assistant professor of paleontology, and one of the authors of a paper, published this week in the journal Nature Geoscience. “From an ecosystem perspective, the Pacific appeared to be relatively unaffected.” 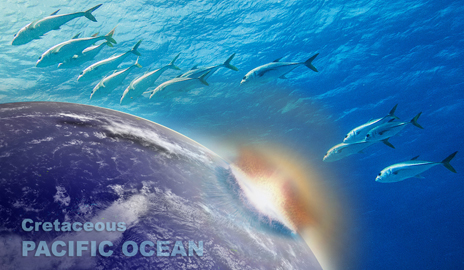 A new study of ancient fish teeth reveals that fish populations in the Pacific Ocean survived an ecological upheaval in the distant past. (Illustration by Patrick Lynch)

The lead author of the paper is Elizabeth Sibert and the principal investigator is Richard Norris, both of the Scripps Institution of Oceanography at UCSD.

Paleontologists have become increasingly interested in studying mass extinction events. “They give us case studies for understanding how species and ecosystems respond to change,” Hull explained. “We have a lot of gaps in our understanding of how the world functions during and after extinctions.”

One way to fill in those gaps is to study fish teeth, which sit on the bottom of the world’s oceans in piles of marine fossils many football fields deep. For decades, scientists have been collecting deep-sea samples that contain thousands of teeth during open-ocean drilling expeditions.

“Fish teeth are tough, so they get preserved and give you the potential to put together the history of fish for hundreds of millions of years,” Hull said.

For this study, researchers compared tooth samples from the Pacific with samples from the Tethys Sea, an ancient seaway that lies partly where the Mediterranean is today. In the Tethys, they discovered, fish populations fell sharply during the Cretaceous-Palaeogene event and remained depressed for at least 3 million years. In the Pacific, fish abundance held steady or increased for at least 4 million years — despite significant extinctions in the region.

Thus far, scientists have no solid explanation for the difference. However, the findings point to the likelihood of great variability and complexity within regional ecosystems after large-scale extinction events.