In Amazon Wars, Bands of Brothers-in-Law

How Culture Influences Violence among the Amazon’s ‘Fierce People’

When Yanomamö men in the Amazon raided villages and killed decades ago, they formed alliances with men in other villages rather than just with close kin like chimpanzees do. And the spoils of war came from marrying their allies’ sisters and daughters, rather than taking their victims’ land and women.

Those findings – which suggest how violence and cooperation can go hand-in-hand and how culture may modify any innate tendencies toward violence – come from a new study of the so-called “fierce people” led by provocative anthropologist Napoleon Chagnon and written by his protégé, University of Utah anthropologist Shane Macfarlan.

Macfarlan says the researchers had expected to find the Yanomamö fought like “bands of brothers” and other close male kin like fathers, sons and cousins who live in the same community and fight nearby communities. That is how fights are conducted by chimpanzees – the only other apes besides humans that form coalitions to fight and kill.

Instead, “a more apt description might be a ‘band of brothers-in-law,’” in which Yanomamö men ally with similar-age men from nearby villages to attack another village, then marry their allies’ female kin, Macfarlan, Chagnon and colleagues write in the study, published in the journal Proceedings of the National Academy of Sciences. 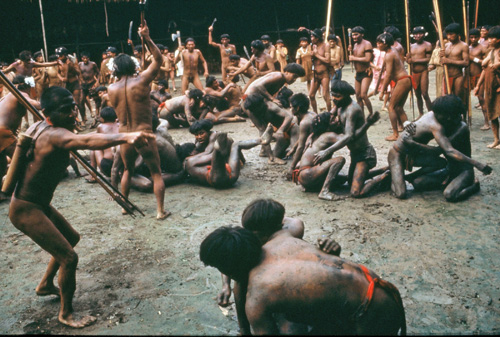 In this mid-1960s photo, men from two Yanomamö villages in the Amazon engage in nonhostile combat to determine the strength and fighting prowess of potential alliance partners. A new study from the University of Utah and University of Missouri indicates the Yanomamö – who engaged in killing to gain status in past decades – often formed alliances with men in different villages when they attacked and killed people in other communities, then married their allies’ sisters or daughters. The idea is they fought like a “band of brothers-in-law” more than a closely related “band of brothers,” fathers and sons from a single community. Photo Credit: Courtesy of Napoleon Chagnon

The study provides a mechanism to explain why Yanomamö warriors in a 1988 Chagnon study had more wives and children than those who did not kill.

“We are showing these guys individually get benefits from engaging in killing,” Macfarlan says. “They’re getting long-term alliance partners – other guys they can trust to get things done. And they are getting marriage opportunities.”

Since his 1968 book “Yanomamö: The Fierce People,” Chagnon has been harshly criticized by some cultural anthropologists who claim he places undue emphasis on genes and biology as underpinnings of human violence, based on his 1964-1993 visits to the Yanomamö. Defenders such as Macfarlan say Chagnon takes a much more balanced view, and that “it’s never a genes-versus-culture argument. They operate in tandem.”

Chagnon got what was seen as vindication in 2012 when he was elected to the prestigious National Academy of Sciences. The new study, with Macfarlan as first author and Chagnon as senior author – is Chagnon’s inaugural PNAS article as a member.

Macfarlan joined the University of Utah faculty this year an assistant professor of anthropology. He worked as Chagnon’s postdoctoral fellow at the University of Missouri from January 2013 to June 2014. Chagnon and Macfarlan conducted the study with two Missouri colleagues: anthropologists Robert S. Walker and Mark V. Flinn. 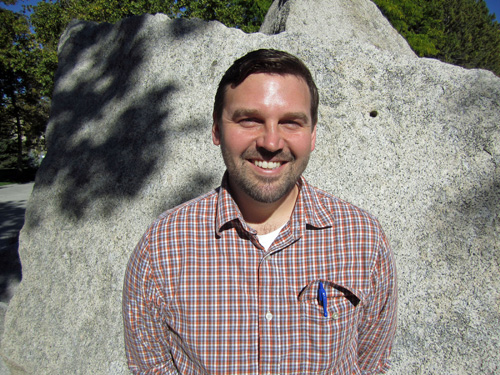 University of Utah anthropologist Shane Macfarlan, shown here, is first author of a new study with provocative anthropologist Napoleon Chagnon about the Yanomamö, or so called “fierce people” of southern Venezuela and northern Brazil. Critics for years have claimed Chagnon places undue emphasis on biological and genetic roots of human violence, but he has insisted he holds a more nuanced view. The new study with Macfarlan found that Yanomamö cultural rules dictate how men in that society conducted lethal raids. Instead of fighting in so-called “fraternal interest groups” or “bands of brothers” and other close relatives from one village, the study found the Yanomamö often formed alliances with men in other villages and married their allies’ sisters and daughters, in effect becoming “bands of brothers-in-law.”Photo Credit: Lee J. Siegel, University of Utah

The Yanomamö – hunters and farmers who live in southern Venezuela and northern Brazil – once gained social status as “unokai” for killing.

Up to 20 Yanomamö (pronounced yah-NO-mama, but also spelled Yanomami or Yanomama) would sneak up on another village at dawn, “shoot the first person they saw and then hightail back home,” Macfarlan says. Some Yanomamö men did this once, some up to 11 times and some never killed. (Data for the study, collected in the 1980s, covered somewhat earlier times when spears, bows and arrows were the primary weapons.)

Macfarlan says the classic debate has been, “does warfare in small-scale societies like the Yanomamö resemble chimpanzee warfare?” – a theory known as the “fraternal interest group” model, in which bands of brothers, fathers, sons and paternal uncles all living in the same community fight other similar communities. 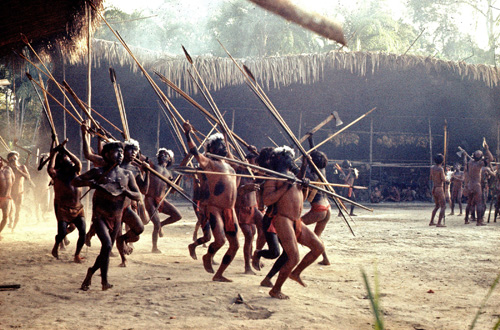 Men from one Yanomamö village in the Amazon “dance” in a neighboring village to show off their military prowess, weaponry and group cohesion after they were invited to a feast to form a coalition between the two communities. This photo dates from the late 1960s. A new study from the University of Utah and University of Missouri shows how the Yanomamö, whom once gained status by killing, formed “bands of brothers-in-law” alliances between villages rather than fighting in more closely related “bands of brothers” from a single village. Photo Credit: Courtesy of Napoleon Chagnon

The new study asked whether Yanomamö killing follows that model or the “strategic alliance model,” which the researchers dub the “band of brothers-in-law” model. This model – supported by the study’s findings – indicates that Yanomamö men form alliances not with close kin from the same community, but with men from other communities. After killing together, a bond is formed and they often marry each other’s daughters or sisters and move into one or the other’s village or form a new village.

“When we started off this project, we all assumed it would be the chimpanzee-like model. But in human groups we have cultural rules that allow us to communicate with other communities. You certainly don’t see chimpanzees doing this.”

Is the study a retreat from what Chagnon’s critics see as too much focus on genetic and biological underpinnings of violence? Macfarlan says no, that Chagnon “has never been as all-biology as people have painted him. Most of his published research shows how unique cultural rules make the Yanomamö an interesting group of people.”

“Some people, myself included, said, to the victor goes the spoils, because if you conquer another territory, you might take their land, food or potentially their females.”

But the new study indicates “the adaptive benefits are the alliances you build by perpetrating acts of warfare,” he adds. “It’s not that you are taking land or females from the vanquished group, but for the Yanomamö, what you acquire is that you can exchange resources with allies, such as labor and, most importantly, female marriage partners.” 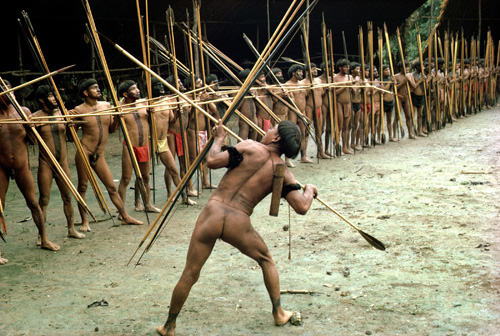 Taken in the late 1970s, this photo shows Yanomamö warriors from two villages preparing to leave on a raid against a third village. A new study showed that the Yanomamö formed such alliances rather than going on raids only with close kin from the same community, which is the way chimpanzees fight. Photo Credit: Courtesy of Napoleon Chagnon

The study’s findings that the Yanomamö form strategic alliances to kill suggest that “our ultracoooperative tendencies tend to go hand-in-hand with our ultralethal tendencies,” Macfarlan says. “We show a relationship between cooperation and violence at a level unseen in other organisms.” That may seem obvious for allied nations in modern wars, but “we’re saying that even in small-scale societies this is the case.”

How the Study was Conducted

The study examined 118 Yanomamö warriors or unokai who had killed a total of 47 people by forming raiding parties of two to 15 men. The researchers analyzed the relationships between every possible pair of men in those raiding parties. Among the 118 unokai men, there were 509 possible pairs. Macfarlan says the findings revealed surprises about the relationship between co-unokai – pairs of men who kill together:

– Only 22 percent of men who kill together were from the same lineage.

– Only 34 percent of co-unokai pairs were from the same place of birth. “Guys who come from different places of birth are more likely to kill together.”

– Among co-killers known to be related, a majority were related on their mother’s side rather than their father’s side – more evidence of forming alliances beyond the immediate paternal kinship group. In Yanomamö culture, true kin are viewed as being on the paternal side, while maternal relatives are seen as belonging to another social group.

– The Yanomamö preferred forming coalitions with men within a median of age difference of 8 years. “The more similar in age, the more likely they will kill multiple times,” Macfarlan says.

– Of the 118 unokai, 102 got married in a total of 223 marriages to 206 women. Of married killers, 70 percent married at least one woman from the same paternal line as an ally in killing. And “the more times they kill together, the more likely they are going to get marriage partners from each other’s family line,” Macfarlan says.

– As a result, “The more times the guys kill together, the more likely they are to move into the same village later in life, despite having come from different village.”

Despite debate over the biological roots of deadly coalitions in chimps and humans, the new study shows how culture can make it “uniquely human” because if Yanomamö men “kill together, they are plugged into this social scene, this marriage market,” Macfarlan says. “They are playing the game of their culture.”