In African ‘fairy circles,’ a template for nature’s many patterns

Be it the Mima mounds of Washington state or the famous “fairy circles” of Namibia in southwestern Africa, people are captivated by the regular patterns of plant growth that blanket desert and grassland landscapes, often with mesmerizing consistency.

Scientists have long debated how these phenomena originate and persist. Now, a new theory suggests that instead of a single overarching cause, large-scale vegetation patterns in arid ecosystems could occasionally stem from millions of local interactions among neighboring plants and animals, according to a Princeton University-led study published Jan. 19 on the cover of the journal Nature.

Like Russian nesting dolls, small-scale patterns formed by plants in response to water scarcity lie within a larger polka-dot formation created by the nests of social insects such as termites and ants. The nests in turn appear as circular clusters of vegetation or as gaps of bare soil, depending on how the insects affect plant growth. 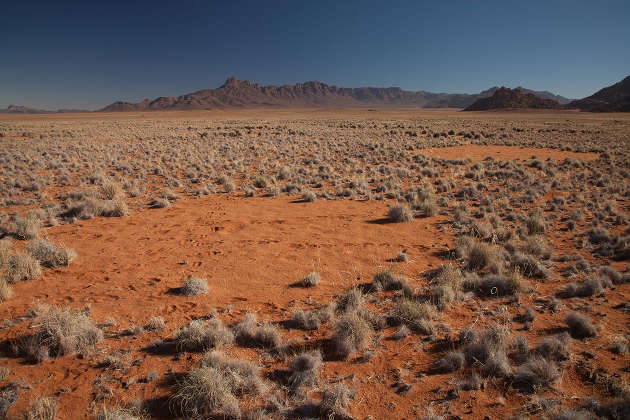 Namibian fairy circles (above) — round patches of desert sand, 2 to 35 meters (6.5 to 114 feet) in diameter, surrounded by rings of tall grass — may result from two mechanisms: termite activity and plant self-organization. Termites remove plants to create the bare discs, which increases the moisture content of the soil within the circles. This enables surrounding plants to thrive, producing the characteristic tall rings of grass. The landscape-wide hexagonal layout emerges from territorial warfare between neighboring termite colonies. (Photo by Jen Guyton, Department of Ecology and Evolutionary Biology)

Satellite images from four continents showed that insect nests are often remarkably evenly spaced, with each nest having an average of six neighbors. The researchers used mathematical models and computer simulations to show that territorial aggression between adjacent colonies can produce this arrangement, which leads to a large-scale hexagonal, or honeycomb, distribution of the nests. Individual colonies spread outward until they encounter and fight with their neighbors, occasionally killing off smaller colonies. Over time, this leads to a mosaic of six-sided territories. Each of the six sides represents the frontline between a colony and its enemies next door.

Lead author Corina Tarnita, an assistant professor of ecology and evolutionary biology at Princeton, explained that the pattern arises when termite colonies are roughly equal in size and the landscape is homogeneous.

“Many social insects tend to be territorial and colonies often fight to death,” Tarnita said. “When any incipient mound appears in an existing territory, the established termites eventually find it and destroy it. Over time, large colonies obliterate the smaller ones. But large colonies end up coexisting in a perpetual border war with neither gaining any ground.”

The honeycomb formations provide the optimal partitioning of space among the different colonies, Tarnita said. “Eventually you end up with colonies of very similar sizes that are as far from each other as possible, while at the same time not leaving any space unoccupied.”

Tarnita explained that many patterns throughout the world — from fish territories to the spatial arrangement of bird nests — likely result from territorial aggression. “Often these patterns are hard to see. What makes social insects and other burrowing animals unique is that their nests create a visible clue of where their territories are,” Tarnita said.

“One of our goals in this work was to understand how vegetation patterns can form from territorial competition for resources between social insect colonies, but the model could apply very broadly to characterize spatial patterns in other territorial animals,” she said.

‘Fairy circles’ and another part of the pattern story

Large-scale vegetation patterns, however, are not always the whole story. A different biological process predominates in the spaces between insect nests. There, plants organize themselves according to a principle known as “scale-dependent feedback.”

The researchers tested this framework on Namibian fairy circles — round patches of desert sand, 2 to 35 meters (6.5 to 114 feet) in diameter, surrounded by rings of tall grass. Named for the folk belief in their supernatural origin, fairy circles have become the unlikely focus of scientific controversy after 2013 research suggested that termites create the bare patches by attacking plants. That paper unleashed a string of publications countering that the circles instead arose from the plants’ self-organization.

The Nature study shows that these two mechanisms are not mutually exclusive, and that both may be operating in Namibia’s deserts. The researchers adapted their models to include the effect of termites removing plants to create the bare discs. This action increases the moisture content of the soil within the circles, enabling surrounding plants to thrive and producing the characteristic tall rings of grass. Meanwhile, the landscape-wide hexagonal layout of circles and grass rings emerges from the repulsive force of territorial warfare between neighboring termite colonies.

In harsh environmental conditions, plants often benefit their immediate neighbors by providing a modicum of shade and concentrating soil moisture in the root zone, leading to the formation of small clumps of vegetation. When these clumps become too big, competition for water outweighs the benefits of neighborly association, which leads to patches of bare soil adjacent to each plant cluster. The net result of this process is a pattern of evenly spaced patches of plant growth within a matrix of bare soil. It’s a mirror image of the insect-nest pattern, but at the scale of centimeters instead of meters and arising from a different biological mechanism.

The researchers show that the combination of these two distinct processes —insect competition and plant scale-dependent feedbacks — generates a more realistic description of desert vegetation than either process can achieve independently.

Previous studies of the fairy circles, for instance, had not reported on the vegetation in between the circles. However, the researchers’ new data from Namibia show, as their theoretical models predicted, that small regularly spaced clusters of plants do occur there.

The mechanics of nature

Co-author Robert Pringle, a Princeton assistant professor of ecology and evolutionary biology, said that the study seeks to uncover the basic mechanics of natural interactions to help scientists understand “how nature works and how it puts itself together.” Such mechanistic knowledge is important for attempts to rehabilitate natural systems damaged by climate change and habitat destruction, he said. Pringle and Tarnita explored the global prevalence of such spatial self-organization in another paper published in the Annual Review of Entomology in January.

“The models in our paper are based on fundamental interactions that occur between neighboring organisms, and those are ubiquitous,” Pringle said. “This kind of regular patterning is widespread, and although it’s not always easy to see, it makes a huge difference in how ecosystems function and how they respond to environmental change.

“Our goal throughout this work has been to contribute to a coherent understanding of regular patterns as a set of phenomena that crop up at many different levels in all kinds of systems, both biological and non-living,” Pringle said. “Fairy circles beautifully exemplify the broader category of patterns that we’re interested in.”

Max Rietkerk, a professor of environmental sciences at Utrecht University in the Netherlands, said that the authors’ theory of spatial patterning is unique for combining behavioral and ecological factors.

“To me, what is new is the alternative explanation of the fairy rings demonstrated by the termite model, plus the combined explanation of the multi-scale patterns by a coupled termite-vegetation model,” he said. “This is significant not only for understanding the patterning of the Namib Desert, but potentially other systems and fields as well because of the combination of social-behavioral and physical-ecological aspects.”

The Nature paper unifies existing theories of natural pattern formation that had been regarded as competing rather than complementary, said co-lead author Juan Bonachela, a former Princeton postdoctoral researcher now an assistant professor of ecology and evolution at the University of Strathclyde in Scotland.

“There have long been two leading theories about how these regular patterns, and especially fairy circles, are formed, and those theories have traditionally been presented as mutually exclusive,” Bonachela said.

“Our findings harmonize both theories and add to the set of possible explanations for regular vegetation patterns observed around the globe,” he said. Bonachela also noted that the new work provides insight into how environments respond to disturbances. “This behavior affects the whole ecosystem, allowing it to survive harsher conditions and recover from droughts much more quickly than if there were no termites.”

The same team of researchers reported in the journal Science in 2015 that termite mounds can stave off desertification in arid savannas and grasslands. The mounds store moisture and nutrients, and the termites’ intricate tunnels allow water to better penetrate soil.

Salvatore Torquato, a Princeton professor of chemistry and the Princeton Institute for the Science and Technology of Materials, said that the vegetative patterns the researchers examined seem to have an “exotic” complexity known as “hyperuniformity” found in numerous systems. First identified in a 2003 paper by Torquato and colleagues, hyperuniformity refers to a large-scale structure that arises from the long-range interactions of its elements.

“Remarkably, the vegetation patterns are reminiscent of some exotic structures that arise in atomic systems, jammed granular media, and the photoreceptor cells in the retina,” said Torquato, who is familiar with the research but had no role in it.” In this case, the long-range interactions would seem to arise from the competition and other interactions between different entities — animals, plants, etc. — in the ecosystem.

“I think this work is very insightful and groundbreaking, and it opens the door to better understand the way that multiple mechanisms interact across scales to produce complex ecosystem structures,” Torquato continued. “This paper presents many exciting and fascinating avenues for future research.”

Co-authors on the paper also included Efrat Sheffer, a former Princeton postdoctoral research associate who is now a senior investigator and lecturer at the Hebrew University of Jerusalem; Jennifer Guyton and Tyler Coverdale, both Princeton doctoral students; and Ryan Long, a former Princeton postdoctoral associate who is now an assistant professor in the University of Idaho’s Department of Fish and Wildlife Sciences. Field data was collected at the Mpala Research Centre in Kenya, Gorongosa National Park in Mozambique and the NamibRand Nature Reserve in Namibia.

The paper, “A theoretical foundation for multi-scale regular vegetation patterns,” was published Jan. 19 by Nature. The work was supported by the National Science Foundation (grant no. DEB-1355122), the Princeton Environmental Institute’s Grand Challenges Program, the Scottish Funding Council’s Marine Alliance for Science and Technology for Scotland (MASTS) (grant no. HR09011), and the DigitalGlobe Foundation.