REDMOND, Wash. – April 12, 2011 – When David Hayden’s team won the U.S. Imagine Cup’s prestigious category Monday, it was a victory for him as a student with low vision, and for all students with reduced vision across the world.

Hayden and Team Note-Taker from Arizona State University (ASU) won the Software Design category after competing in Microsoft’s U.S. Imagine Cup finals over the weekend. His team will advance to compete in the Imagine Cup world finals in July.

“Technology empowers the individual to make the world accessible according to their own needs,” Hayden said after finding out that his team had won. He said it’s awesome that his team’s “portable assistive technology” was recognized because it can make taking notes for visually impaired students like him so much easier. Being able to take your own notes “is well known to benefit retention,” he said.

Imagine Cup judge Steve Clayton said he loved asking teams why they chose the projects they did, particularly to learn of stories such as Hayden’s, with such a personal reason for inspiring innovation.

“What impressed me as much as the solutions presented was the passion and dedication of the teams,” said Clayton, editor of Next at Microsoft Blog. “Each team put their heart, soul and a lot of time into their projects, and that shone through in their commitment and belief in what they presented today.” 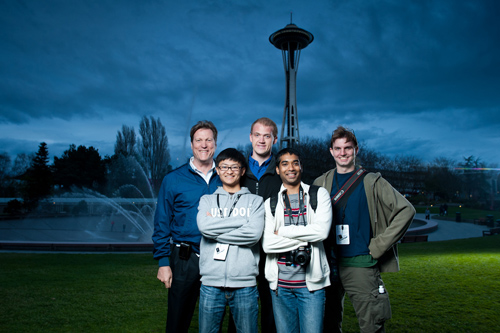 Clayton said the numbers speak for themselves – the Imagine Cup is growing each year on every level, whether it’s the number of teams participating or the number of people following the event.

“I love the phrase ‘change the world or go home,’ and these students could have gone home, could have done something different with their evenings and weekends but they decided to pursue the dream of changing the world with technology,” Clayton said. “The Imagine Cup is really just a great vehicle for those dreams, and I hope all of them become reality.”

“I’m glad I wasn’t a judge this year,” joked Mark Hindsbo, Microsoft’s vice president of Developer and Platform Evangelism, noting this year’s particularly tough competition before announcing the winners. “The level of projects this year has truly been phenomenal. When we started Imagine Cup nine years ago, there were only a couple of projects that were the quality that every project is this year.”

In addition to the Software Design competition, other teams won the Game Design and People’s Choice competitions with projects that aim to help increase environmental awareness and access to ultrasound technology.

Team Bloom from Tribeca Flashpoint Media Arts Academy won the Game Design Windows/Xbox category for their children’s game “Spero,” in which players find alternative energy solutions by picking up waste and recycling in order to keep an island a safer place. Team Bloom also won the People’s Choice Award – in which they were the top vote getter in Games among 34,000 votes cast in online voting for the U.S. Imagine Cup.

The team tested “Spero” (which means “I hope” in Italian) extensively in classrooms, and they can’t wait to go home and tell the children who helped test the game that it won.

“To win one of them [Game Design and People’s Choice] would have just been amazing, but both is reaffirmation is that Spero is what the judges want to see and is also what people want,” said team member David Grund.

Team Big Impact Bear from the University of Houston won the Game Design – Mobile category for its game “Forest Gun,” which takes a proactive approach to preventing and reversing deforestation by re-growing resources that have been lost due to unregulated logging.

Shortly after his final pitch to the Imagine Cup judges, Team Note-Taker’s Hayden expressed confidence that he had sold them on how his team’s project could help millions of students.

“I think I made my point and showed how Note-Taker can help low-vision students, who number 20 million in the U.S.,” he said. “I think the judges agreed with me by the end. I’m looking forward to seeing the results tonight.”

The judges did agree, awarding Hayden’s team the top prize and awarding them a berth in the Imagine Cup Worldwide Finals in New York City in July. 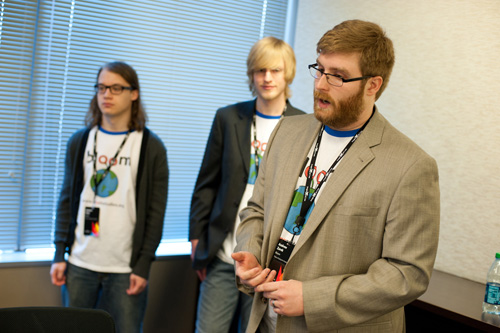 Hayden started work on the device because of his own classroom challenges. In 2007, as he was pursuing a dual major in computer science and math, he started having difficulty keeping up with his three upper-level math classes. One professor would cover as many as 12 whiteboards with equations in just one class period, and he couldn’t keep up. Although he was able to use a monocular to watch the lecture, Hayden struggled to cycle between viewing the board and his notes. He reluctantly dropped the courses.

Hayden said he had always felt that the role of technology was to solve problems. But before he struggled in the classroom, he had never used it to solve his own. When he realized that existing assistive devices couldn’t help him, he decided to develop his own solution. Working for two years with John Black, a research scientist at ASU’s Center for Cognitive Ubiquitous Computing, Hayden built a proof-of-concept prototype of Note-Taker and reenrolled in the three math classes he had previously dropped. He earned an A in all three courses.

The team entered an improved, third-generation Note-Taker prototype in this year’s Software Design category. The portable device they built includes a custom-designed video camera attached to a Windows Tablet PC. The camera streams video from a presentation or lecture onto one half of the tablet’s split-screen display, where the camera’s aim and zoom can be controlled through the touch interface. A second window allows the student to take handwritten or typed notes into Microsoft OneNote.

Hayden, who won a National Science Foundation Graduate Research Fellowship earlier this year, plans to pursue a PhD in computer science. (He’s already been accepted at MIT.) He’s also considering starting his own business and developing other assistive technologies with an eye toward making them useful to the broader population.

Whatever his next move, he will undoubtedly bring the same level of passion he brought to the Note-Taker.

Top high school and college students from around the United States traveled to Microsoft’s Redmond campus over the weekend for the event, which encourages young people to use technology to address worldwide problems such as hunger, disease, education and equality.

That theme came out very strongly on the competition’s last day.

“That concludes the competition, but hopefully not in any way, shape or form the journey,” Hindsbo told the students. “It’s not about winning; you’re all winners. There is a collection of ‘no’s and ‘yes’s you’ll get in your life. It’s about the journey.” 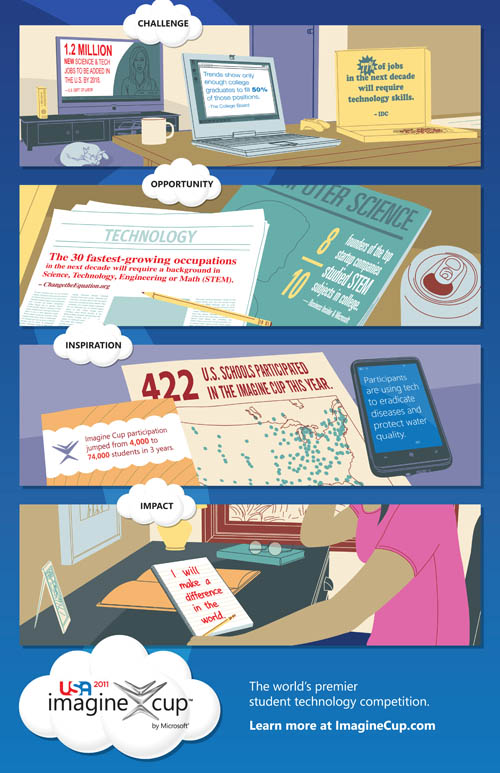 Hindsbo said he looks forward to a day when society will celebrate competitions such as Imagine Cup as heartily as college sports. Imagine Cup serves not only to inspire students to use technology in tackling worldwide problems, but also to engage students in science, technology, engineering and math (STEM).

Projections show there will be about 1.2 million new computer science/IT jobs in the United States by 2018, Hindsbo said. Yet current trends show that the United States has only half the number of college graduates needed to fill those positions. Only about 15 percent of U.S. undergraduates are studying STEM courses compared to two or three times as many in countries such as India and China.

The fact that Imagine Cup has grown each of its nine years encourages him that Microsoft is on the right track, Hindsbo said.