Geologists drilling an exploratory geothermal well in 2009 in the Krafla volcano in Iceland met with a big surprise: underground lava, also called magma, flowed into the well at 2.1 kilometers (6,900 feet) depth.

It forced the scientists to stop drilling.

“To the best of our knowledge, only one previous instance has been documented of magma flowing into a geothermal well while drilling,” said Wilfred Elders, a geologist at the University of California, Riverside, who led the research team.

Elders and his team studied the well within the Krafla caldera as part of the Iceland Deep Drilling Project, an industry-government consortium, to test whether geothermal fluids at supercritical pressures and temperatures could be exploited as sources of power, said Leonard Johnson, program director in NSF’s Division of Earth Sciences, which funded the research. 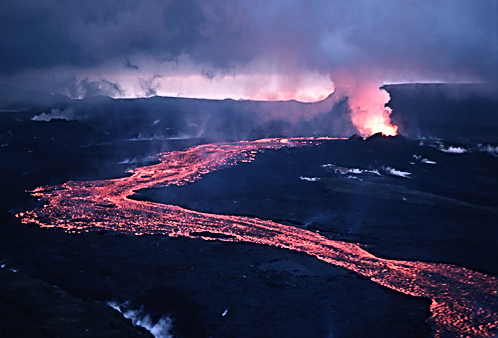 “We were drilling a well designed to search for very deep–4.5 kilometers (15,000 feet)–geothermal resources in the volcano,” said Elders.

“While the magma flow interrupted our project, it gave us a unique opportunity to test a very hot geothermal system as an energy source.”

Currently, a third of the electric power and 95 percent of home heating in Iceland is produced from steam and hot water that occurs naturally in volcanic rocks.

“The economics of generating electric power from such geothermal steam improves the higher its temperature and pressure,” Elders said.

“As you drill deeper into a hot zone, the temperature and pressure rise. It should be possible to reach an environment where a denser fluid with very high heat content–but also with unusually low viscosity occurs–so-called ‘supercritical water.'” 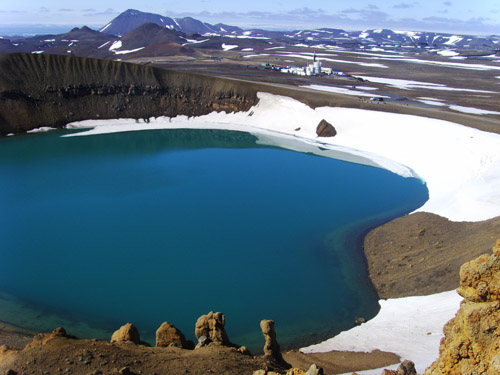 “Our analyses show that this magma formed by partial melting of basalts within the Krafla volcano,” Elders said.

“The occurrence of minor amounts of rhyolite in some basalt volcanoes has always been something of a puzzle.

“It had been inferred that some unknown process in the source area of magmas, in the mantle deep below the crust of the Earth, allows a silica-rich rhyolite melt to form–in addition to the dominant silica-poor basalt magma.” 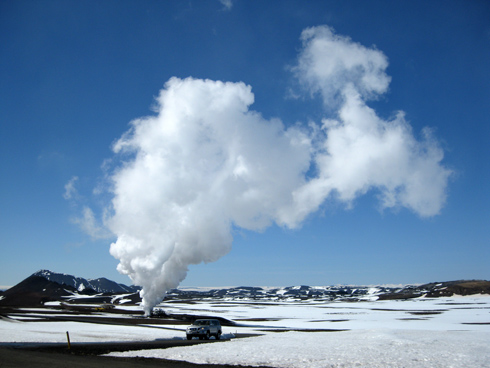 Elders said that in geothermal systems water reacts with and alters the composition of the rocks, a process termed “hydrothermal alteration.”

“Our research shows that the rhyolite formed when a mantle-derived basaltic magma encountered hydrothermally altered basalt, and partially melted and assimilated that rock,” he said.

In the spring of 2009, Elders and colleagues progressed normally with drilling the well to 2 kilometers (6,600 feet) depth.

In the next 100 meters (330 feet), however, multiple acute drilling problems occurred. 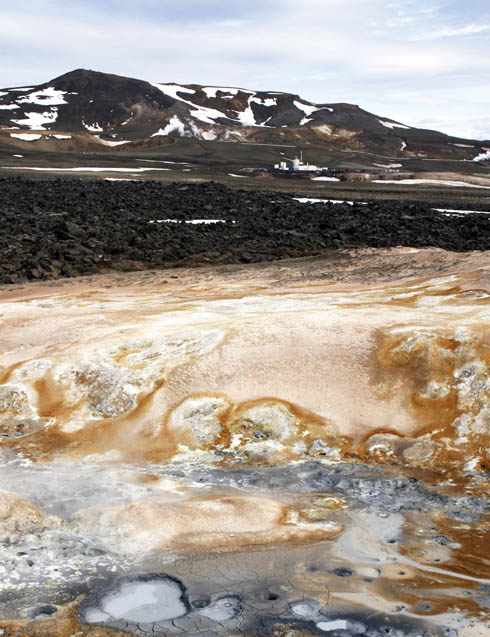 The drillers determined that at 2,104 meters (6,900 feet) depth, the rate of penetration suddenly increased and the torque on the drilling assembly increased, halting its rotation.

An intrusion of magma had filled the lowest 9 meters (30 feet) of the open borehole. The team terminated the drilling and completed the hole as a production well.

“When the well was tested high pressure dry steam flowed to the surface with a temperature of 400 degrees Celsius or 750 degrees Fahrenheit, coming from a depth shallower than the magma,” Elders said. 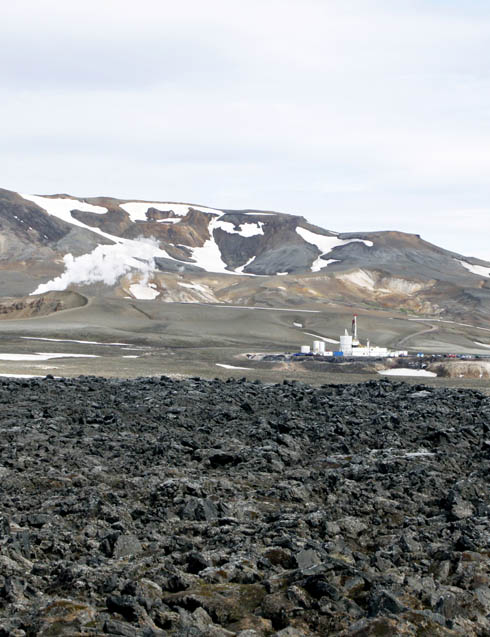 Across a basalt flow from an earlier Krafla eruption is the drill rig that encountered magma. Image credit: W. Elders, UC-Riverside

He and colleagues estimated that this steam could generate 25 megawatts of electricity if passed through a suitable turbine–enough electricity to power 25,000 to 30,000 homes.

“What makes this well an attractive source of energy,” said Elders, “is that typical high-temperature geothermal wells produce only 5 to 8 megawatts of electricity from 300 degrees Celsius or 570 degrees Fahrenheit wet steam.”

He believes it should be possible to find reasonably shallow bodies of magma, elsewhere in Iceland and the world, wherever young volcanic rocks occur.

“In the future these could become attractive sources of high-grade energy,” said Elders.

The Iceland Deep Drilling Project has not abandoned the search for supercritical geothermal resources. The project plans to drill a second deep hole in southwest Iceland in 2013.