The amount of information generated is increasing dramatically each year driven by armies of sensors, mobile devices, social networks, cloud computing and public sources of information like the Web. At the same time, demand for storage capacity worldwide will continue to grow at a compound annual growth rate of 49.8 percent from 2009-2014, according to IDC (1). Clients require new technologies and ways to capitalize on the growing volume, variety and velocity of information known as “Big Data.”

IBM continues to invest in the development of tape storage as an inexpensive, efficient way to store massive volumes of data. For example, IBM is today detailing seven significant improvements to its portfolio of tape and other storage archiving products, including the industry’s first tape library system to provide over 2.7 exabytes of automated, low cost storage — enough to store nearly 3 times all the mobile data generated in the U.S. in 2010 (an exabyte is 1 followed by 18 zeroes) (2). 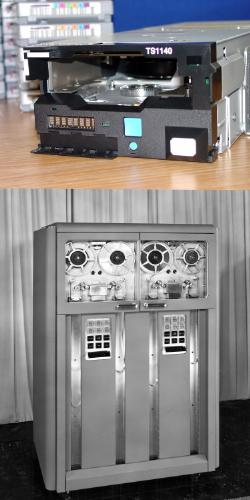 IBM System Storage™ TS3500 Tape Library is enabled by a new, IBM-developed shuttle technology — a mechanical attachment that connects up to 15 tape libraries to create a single, high capacity library complex at a lower cost. The TS3500 offers 80 percent more capacity than a comparable Oracle tape library and is the highest capacity library in the industry, making it ideal for the world’s largest data archives (3).

For example, the National Institute of Water & Atmospheric Research (NIWA) in New Zealand uses two TS3500 Tape Libraries to support a sophisticated POWER supercomputer used to tackle challenges in such fields as energy, aerospace, weather and climate modeling. The libraries together hold 5 petabytes of data, the equivalent of more than 1,000,000 DVDs. This means that if a DVD were written to the tape libraries at the rate of one every minute, it would take more than 2 years before their capacity was exhausted.

IBM in 1952 pioneered the use of magnetic tape for data storage, which is one of the 100 Icons of Progress in IBM’s century-long history. Today, IBM is announcing the IBM System Storage TS1140 Tape Drive, which holds 2 million times more data than IBM’s first tape drive (4). The TS1140 employs fewer and more efficient components developed with IBM Research, enabling it to use up to 64 percent less energy and can deliver up to 80 percent more performance than a comparable Oracle drive, so clients can improve productivity at a lower cost (5).

Tape storage is gaining new opportunities as a low cost, energy efficient way for companies in industries like media and entertainment and healthcare to create huge archives of digital assets and information being driven by Big Data. In fact, the amount of digital archives stored to tape is set to experience a six fold increase from 2010 through 2015, according to Enterprise Strategy Group (6). IBM is well positioned to capitalize on this opportunity as the tape storage market share leader with over 40% revenue share — more than twice as much share as the next competitors HP and Oracle, according to IDC (7).

IBM has a clear edge over storage vendors like EMC that don’t support or develop tape. Tape and disk can be used together to deliver clients tiered storage that enables them to store data within the different tiers based on their data priorities. For example, IBM’s Scale-out Network Attached Storage (SONAS) system and Information Archive both use policies to automatically migrate data to the tape storage tier. This can reduce total cost of ownership for clients by up to 40% in the long-term, according to an internal IBM study (8).

Klinikverbund Suedwest GmbH is an association of clinics and hospitals in Southwest Germany with 4,200 employees caring for more than 250,000 patients each year. Working with IBM Business Partner Profi AG, the Association installed the IBM XIV storage system with IBM Tivoli Storage Manager to work with its existing IBM System Storage TS3310 Tape Library. “By using both IBM tape and disk technology, the Association has lowered storage costs significantly,” said Dr. med. Gunther K. Weiss, M.Sc., managing director, Klinikverbund Suedwest GmbH. “With these different storage tiers at our disposal, we can ensure that our clients and employees have secure, ready access to their data.”

IBM is announcing today enhancements to SONAS, which scales to over 14 petabytes of clustered storage and is based on technology invented by IBM Research. SONAS now offers double the throughput — or the amount of data processed by the system during a given period of time — of its predecessor and faster response times (9). The technology, which will provide support for commonly used anti-virus applications, is designed to offer protection from viruses and malware threats with the ability to scan archived data and isolate or delete compromised files. In addition, SONAS will now support an open standard protocol called NDMP, enabling clients to backup and protect large amounts of data in SONAS using ISV applications that support NDMP.

IBM is also improving the IBM Information Archive for Email, Files and eDiscovery, a pre-installed, pre-configured archiving solution. With integrated hardware, software and services, the technology can reduce the cost of installing and implementing a storage archive by up to 70% compared to starting with piece parts and can be deployed in a few days, according to IBM’s internal measurements (10).

Finally, IBM is announcing new or enhanced tape virtualization offerings for mainframe or open storage environments to provide clients improved access to and protection for their data in the virtualized datacenter. These include:

“As part of its $6 billion annual investment in R&D, IBM continues to develop innovative storage technologies for smarter computing,” said Brian Truskowski, General Manager, IBM System Storage and Networking. “The data protection and retention solutions IBM is announcing today provide clients with a comprehensive approach to protecting and accessing their most valuable asset — their data.”