Challenge to Spur Innovation and Accelerate Mobile Apps on Watson

The program, being driven by the newly formed IBM Watson Group, aims to encourage developers to spread cognitive computing apps into the marketplace.  IBM’s Watson cognitive computing innovation represents a new class of services, software and apps that analyze, improve by learning, and discover answers and insights to complex questions from massive amounts of disparate data. 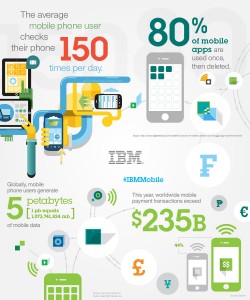 “The power of Watson in the palm of your hand is a game-changing proposition, so we’re calling on mobile developers around the world to start building cognitive computing apps infused with Watson’s intelligence,” said Mike Rhodin, Senior Vice President, IBM Watson Group.” Imagine a new class of apps that deliver deep insights to consumers and business users instantly — wherever they are — over the cloud. It’s about changing the essence of decision making from ‘information at your fingertips’ to actual insights.”

Today, it’s second nature for people to simply tap an app to stay connected, make a purchase or manage a bank account. The IBM Watson Mobile Developer Challenge will encourage developers around the world to build sophisticated cognitive apps that can change the way consumers and businesses interact with data on their mobile devices. Through this initiative, mobile developers can take advantage of Watson’s ability to understand the complexities of human language, “read” millions of pages of data in seconds and improve its own performance by learning.

Over the next three months, the global challenge invites mobile developers and entrepreneurs to share their best ideas to build and develop mobile apps into prototypes. Three winners will join the Watson Ecosystem Program.  The winners will work with IBM’s recently launched global consulting practice, IBM Interactive Experience to receive design consulting and support from IBM experts to develop a viable commercial app.

The IBM Watson Mobile Developer Challenge is part of the IBM MobileFirst strategy to help businesses of all sizes adopt mobile technology to better engage with customers and extend their businesses to new markets. The news also represents the latest milestone in the newly formed IBM Watson Group to fuel an ecosystem of developers, start-ups, tech companies and venture capitalists building Watson powered apps as part of the Watson Developers Cloud.

To date, more than 1,500 individuals and organizations have contacted IBM to share their ideas for creating cognitive computing applications that redefine how businesses and consumers make decisions. In fact, global developers have created and plan to go to market in 2014 with Watson apps across a variety of industries.

Using natural language processing and analytics, Watson processes information akin to how people think, representing a major shift in an organization’s ability to quickly analyze, understand and respond to Big Data.  Watson’s ability to answer complex questions with speed, accuracy and confidence is transforming decision making across a variety of industries, including health care, financial services and retail.

IBM has advanced Watson from a game playing innovation into a commercial technology. Delivered from the cloud and able to power new consumer and enterprise apps, Watson is 24 times faster; smarter, with a 2,400 percent improvement in performance; and 90 percent smaller than the original system.

Named after IBM founder Thomas J. Watson, Watson was developed in IBM’s Research labs and is now being accelerated into market by the new IBM Watson Group.  As part of the group, IBM is investing $1 billion to introduce a new class of cognitive computing services, software and apps, and investing $100 million to spur innovation for software application providers to develop a new generation of Watson powered solutions.

For more information or to apply to participate in the Challenge, visit  (www.ibmwatson.com)