Yorktown Heights, N.Y. – 17 May 2017: IBM (NYSE: IBM) announced today it has successfully built and tested its most powerful universal quantum computing processors. The first upgraded processor will be available for use by developers, researchers, and programmers to explore quantum computing using a real quantum processor at no cost via the IBM Cloud. The second is a new prototype of a commercial processor, which will be the core for the first IBM Q early-access commercial systems.

Launched in March 2017, IBM Q is an industry-first initiative to build commercially available universal quantum computing systems for business and science applications. IBM Q systems and services will be delivered via the IBM Cloud platform. IBM first opened public access to its quantum processors one year ago, to serve as an enablement tool for scientific research, a resource for university classrooms, and a catalyst of enthusiasm for the field. To date users have run more than 300,000 quantum experiments on the IBM Cloud. 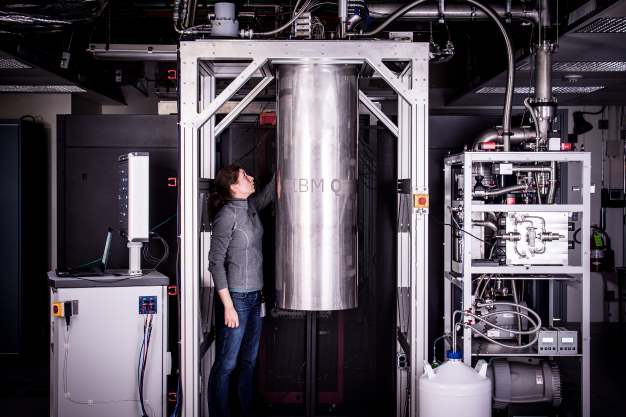 IBM Research Staff Member Katie Pooley, an Applied Physics PhD from Harvard who joined IBM in 2015, at the Thomas J Watson Research Center, is a process integrator on the IBM Q team. In the photo, Pooley is examining a cryostat with the new prototype of a commercial quantum processor inside. (Image credit: Andy Aaron, IBM)

With the introduction of two new processors today for IBM Q, the company is building the foundation for solving practical problems in business and science that are intractable even with today’s most powerful classical computing systems. The two new IBM-developed processors include:

“The significant engineering improvements announced today will allow IBM to scale future processors to include 50 or more qubits, and demonstrate computational capabilities beyond today’s classical computing systems,” said Arvind Krishna, senior vice president and director of IBM Research and Hybrid Cloud. “These powerful upgrades to our quantum systems, delivered via the IBM Cloud, allow us to imagine new applications and new frontiers for discovery that are virtually unattainable using classical computers alone.”

The inherent computational power of a quantum processor to solve practical problems depends on far more than simply the number of qubits. Due to the fragile nature of quantum information, increasing the computational power requires advances in the quality of the qubits, how the qubits talk to each other and minimizing the quantum errors that can occur.

IBM has adopted a new metric to characterize the computational power of quantum systems: Quantum Volume. Quantum Volume accounts for the number and quality of qubits, circuit connectivity, and error rates of operations. IBM’s prototype commercial processor offers a significant improvement in the Quantum Volume. Over the next few years, IBM plans to continue to push the technology aggressively and aims to significantly increase the Quantum Volume of future systems by improving all aspects of the processors, including incorporating 50 or more qubits. Experts can learn more here: https://ibm.biz/BdiaQe.

While technologies that currently run on classical computers, such as Watson, can help find patterns and insights buried in vast amounts of existing data, quantum computers will deliver solutions to important problems where patterns cannot be found because there isn’t enough data and the possibilities that you need to explore to get to the answer are too enormous to ever be processed by classical computers.

Future applications of quantum computing may include:

— Materials and Chemistry: Untangling the complexity of molecular and chemical interactions leading to the discovery of new materials and medicines;
— Artificial Intelligence: Making facets of artificial intelligence such as machine learning much more powerful; or
— Cloud Security: Using the laws of quantum physics to enhance the security of private data in the cloud.