LAGOS and NAIROBI – 06 Feb 2014: IBM has launched a 10-year initiative to bring Watson and other cognitive systems to Africa in a bid to fuel development and spur business opportunities across the world’s fastest growing continent. Dubbed “Project Lucy” after the earliest known human ancestor, IBM will invest US$100 million in the initiative, giving scientists and partners access to the world’s most advanced cognitive computing technologies.

“In the last decade, Africa has been a tremendous growth story — yet the continent’s challenges, stemming from population growth, water scarcity, disease, low agricultural yield and other factors are impediments to inclusive economic growth,” said Kamal Bhattacharya, Director, IBM Research – Africa. “With the ability to learn from emerging patterns and discover new correlations, Watson’s cognitive capabilities hold enormous potential in Africa – helping it to achieve in the next two decades what today’s developed markets have achieved over two centuries.”

IBM’s Watson represents a new era of cognitive computing, in which systems and software are not programmed, but actually improve by learning so they can discover answers to questions and uncover insights by analyzing massive amounts of Big Data. 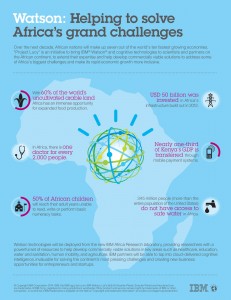 Watson technologies will be deployed from IBM’s new Africa Research laboratory providing researchers with a powerful set of resources to help develop commercially-viable solutions in key areas such as healthcare, education, water and sanitation, human mobility and agriculture.

To help fuel the cognitive computing market and build an ecosystem around Watson, IBM will also establish a new pan-African Center of Excellence for Data-Driven Development (CEDD) and is recruiting research partners such as universities, development agencies, start-ups and clients in Africa and around the world. By joining the initiative, IBM’s partners will be able to tap into cloud-delivered cognitive intelligence that will be invaluable for solving the continent’s most pressing challenges and creating new business opportunities.

“For Africa to join, and eventually leapfrog, other economies, we need comprehensive investments in science and technology that are well integrated with economic planning and aligned to the African landscape,” said Prof Rahamon Bello, Vice Chancellor, University of Lagos. “I see a great opportunity for innovative research partnerships between companies like IBM and African organizations, bringing together the world’s most advanced technologies with local expertise and knowledge.”

Center of Excellence for Data-Driven Development

Decades of development work in Africa have significantly helped to improve the livelihood and raise the standard of living for millions across the continent. However, traditional approaches have often fallen short because of commercial unviability, a domain specific scope and a lack of accurate data.

Big Data technologies have a major role to play in Africa’s development challenges: from understanding food price patterns, to estimating GDP and poverty numbers, to anticipating disease – the key is turning data into knowledge and actionable insight.

“The next wave of development in Africa requires a new collaborative approach where nonprofit and commercial organizations like RTI and IBM work together to consolidate, analyze and act upon the continent’s data,” said Aaron Williams, Executive Vice President for International Development, RTI International. “Data-driven development has the potential to improve the human condition and provide decision makers with the insight they need to make more targeted interventions.”

By establishing the pan-African Center for Data-Driven Development (CEDD), IBM will leverage the latest Watson cognitive technologies to provide its research partners with access to high-frequency and better organized data. This will enable scientists and analysts to more accurately calculate social and economic conditions and identify previously unseen correlations across multiple domains. Through the Project Lucy initiative, partners will be able to tap into IBM’s unparalleled expertise in cognitive computing across its 12 global laboratories and new Watson business unit. Through CEDD they will gain access to the resources, tools and knowledge-based services necessary for developing cognitive computing innovations.

“Africa is facing a double challenge: the lack of accessible data to support its economic development, and the lack of advanced skills in data analysis. IBM’s work to share Watson with Africa will help to address both challenges,” said Michel Bézy, Associate Director, Carnegie Mellon University in Rwanda. “We are really excited by this opportunity for our students and faculty to partner with IBM to solve critical regional problems with the most advanced cognitive technology available.”

Two of the first focus areas of the new center are healthcare and education:

Sub-Saharan Africa is home to approximately 25 percent of the world’s disease burden; yet the most common form of healthcare outside of cities is delivered by community health workers. CEDD will collect encyclopedic knowledge about traditional and non-traditional diseases in Africa. With access to Watson’s cognitive intelligence, doctors, nurses and field workers will get help in diagnosing illnesses and identifying the best treatment for each patient.

For example, women in sub-Saharan Africa account for 22 percent of all cases of cervical cancer worldwide mainly due to a lack of services and knowledge. Watson could provide new insights into the evolution of cervical cancer in Africa and suggest new approaches for its prevention, diagnosis and treatment. By feeding back valuable clinical data about their field observations, healthcare workers will be able to contribute to improving Watson’s inference abilities.

Currently, half of African children will reach their adolescent years unable to read, write or perform basic numeric tasks. The key to improving these statistics is a thorough understanding of student performance, teacher expertise, attendance levels, class sizes, linguistic abilities and learning materials. While previous information systems have only provided a limited view of point problems, using Watson technologies, CEDD aims to create new holistic approaches for analyzing data to identify previously unrecorded correlations. For example, Watson could identify the link between a contaminated water borehole, an epidemic of cholera and the subsequent low levels of school attendance in the region. Watson could also help to uncover other causes of low school attendance in a particular region such as a lack of sanitary supplies and cultural traditions placing childcare responsibility on older siblings.

Today’s announcement is part of a broader effort by IBM to advance and share cognitive computing innovations around the world.  Nearly three years after its triumph on the television quiz show Jeopardy!, IBM has advanced Watson from a game playing innovation into a commercial technology. The company recently established a new Watson business unit dedicated to the development and commercialization of cognitive computing innovations and is investing more than $1 billion to bring cognitive applications and services to market.

This week IBM is also announcing other investments into the African innovation ecosystem with the opening of new IBM Innovation Centers in Lagos, Nigeria; Casablanca, Morocco, and Johannesburg, South Africa. These new centers aim to spur local growth and fuel an ecosystem of development and entrepreneurship around Big Data analytics and cloud computing in the region.  In recognition of its role in driving data-driven growth and opportunity, this week Frost & Sullivan named IBM an Innovation Leader in Big Data and Analytics in Sub-Saharan Africa.

IBM recently organized an initiative asking people from across Africa to submit images which best illustrate Africa’s grand challenges and opportunities and help illustrate the mission of IBM’s new Africa Research Lab. ‘The World is Our Lab – Africa’ project has generated over 1200 images from across 25 African countries helping to tell the other side of the continent’s story. To visit the project website, go to: https://www.theworldisourlabafrica.com/

For more information on ‘Project Lucy’ and to download the official IBM infographic, go to:  https://ibm.co/1eUYH9S

To download images of the IBM Research – Africa lab and its staff, go to: https://bit.ly/MIK2YY

To view a film about Africa’s grand challenges and opportunities visit:  https://bit.ly/19ZvXAv

IBM has had a direct presence in Africa for over 70 years that today spans more than 20 countries, including Morocco, Egypt, South Africa, Nigeria, Ghana, Angola, Kenya and Tanzania. IBM Research – Africa – the continent’s first commercial technology research facility – was inaugurated in by His Excellency, the President of Kenya, Hon. Uhuru Kenyatta in November, 2013. The lab employs researchers from some of the world’s best universities to conduct applied and far-reaching exploratory research into the grand challenges of the African continent by delivering commercially-viable innovations that impact people’s lives.

The 2000m2 facility features one of Africa’s most powerful, cloud-enabled computing hubs giving researchers the ability to analyze and draw insight from vast amounts of data in the search for solutions to Africa’s most pressing challenges.

Named after IBM founder Thomas J. Watson, IBM Watson was developed in IBM’s Research labs. Using natural language processing and analytics, Watson processes information akin to how people think, representing a major shift in an organization’s ability to quickly analyze, understand and respond to Big Data. Now delivered from the cloud from a single Power 750 server running Linux and able to power new consumer and enterprise services and apps, Watson is 24 times faster, smarter (with a 2,400 percent improvement in performance) and 90 percent smaller – IBM has shrunk Watson from the size of a master bedroom to three stacked pizza boxes. Watson’s ability to answer complex questions posed in natural language with speed, accuracy and confidence is transforming decision making across a variety of industries.

For example, IBM is partnering with a range of healthcare organizations to apply Watson in order to transform how medicine is practiced, paid for and taught.  The company is also working with a variety of organizations to transform how enterprises conduct research, share data-driven insights, and engage their customers via Watson-powered solutions.

To share cognitive computing with a broader group of innovators, IBM has made Watson available as a development platform in the cloud, enabling software application providers to build a new generation of apps infused with cognitive computing intelligence.