The first-ever man vs. machine Jeopardy! competition will air on February 14, 15 and 16, 2011, with two matches being played over three consecutive days. 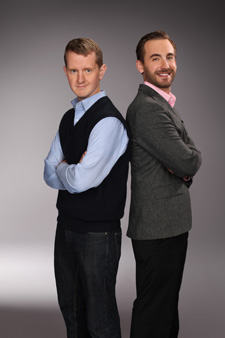 IBM and Jeopardy! today announced that an IBM computing system named “Watson” will compete on Jeopardy! against the show’s two most successful and celebrated contestants -- Ken Jennings (l.) and Brad Rutter. The first-ever man vs. machine Jeopardy! competition will air on February 14, 15 and 16, 2011, with two matches being played over three consecutive days. Image credit: IBM

Watson, named after IBM founder Thomas J. Watson, was built by a team of IBM scientists who set out to accomplish a grand challenge – build a computing system that rivals a human’s ability to answer questions posed in natural language with speed, accuracy and confidence. The Jeopardy! format provides the ultimate challenge because the game’s clues involve analyzing subtle meaning, irony, riddles, and other complexities in which humans excel and computers traditionally do not.

Competing against Watson will be two of the most celebrated players ever to appear on Jeopardy!  Ken Jennings broke the Jeopardy! record for the most consecutive games played by winning 74 games in a row during the 2004-2005 season, resulting in winnings of more than $2.5 million. Brad Rutter won the highest cumulative amount ever by a single Jeopardy! player, earning $3,255,102. The total amount is a combination of Rutter’s original appearance in 2002, plus three Tournament wins:  the “Tournament of Champions” and the “Million Dollar Masters Tournament” in 2002 and the “Ultimate Tournament of Champions” in 2005.

“After four years, our scientific team believes that Watson is ready for this challenge based on its ability to rapidly comprehend what the Jeopardy! clue is asking, analyze the information it has access to, come up with precise answers, and develop an accurate confidence in its response,” said Dr. David Ferrucci, the scientist leading the IBM Research team that has created Watson. “Beyond our excitement for the match itself, our team is very motivated by the possibilities that Watson’s breakthrough computing capabilities hold for building a smarter planet and helping people in their business tasks and personal lives.”

“We’re thrilled that Jeopardy! is considered a benchmark of ultimate knowledge,” said Harry Friedman, Executive Producer of Jeopardy!. “Performing well on Jeopardy! requires a combination of skills, and it will be fascinating to see whether a computer can compete against arguably the two best Jeopardy! players ever.”

Prepping a Machine to Play a Human

This fall, Watson played more than 50 “sparring games” against former Jeopardy! Tournament of Champions contestants in final preparation for its television debut. In addition, Watson has taken and passed the same Jeopardy! contestant test that humans take to qualify to play on the show, giving Jeopardy! producers confidence that the match will be both entertaining and competitive.

Highlights of the sparring matches can be viewed and tracked over the next few weeks at www.ibmwatson.com.

Beyond Jeopardy!, the technology behind Watson can be adapted to solve problems and drive progress in various fields. The computer has the ability to sift through vast amounts of data and return precise answers, ranking its confidence in its answers. The technology could be applied in areas such as healthcare, to help accurately diagnose patients, to improve online self-service help desks, to provide tourists and citizens with specific information regarding cities, prompt customer support via phone, and much more.

Watson is a breakthrough human achievement in the scientific field of Question and Answering, also known as “QA.” The Watson software is powered by an IBM POWER7 server optimized to handle the massive number of tasks that Watson must perform at rapid speeds to analyze complex language and deliver correct responses to Jeopardy! clues. The system incorporates a number of proprietary technologies for the specialized demands of processing an enormous number of concurrent tasks and data while analyzing information in real time.

Jeopardy!, the winner of 28 Emmy awards since its syndicated debut in 1984, is in the Guinness Book of World Records for the most awards won by a TV Game Show. The series is the #1-rated quiz show in syndication with nearly 9 million daily viewers. Jeopardy! is produced by Sony Pictures Television, a Sony Pictures Entertainment Company. It is distributed domestically by CBS Television Distribution and internationally by CBS Television International, both units of CBS Corp.

For photos and art work of Jeopardy!, visit  www.cbspressexpress.com