First let’s get to understand what fracking is:

According to Environmental Protection Agency, hydraulic fracturing, also known as fracking, produces fractures in the rock formation that stimulate the flow of natural gas or oil, increasing the volumes that can be recovered. Wells may be drilled vertically hundreds to thousands of meters below the land surface and may include horizontal or directional sections extending thousands of meters. 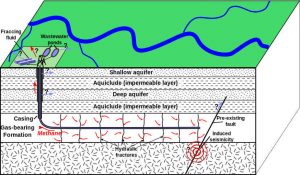 Fractures are created by pumping large quantities of fluids at high pressure down a wellbore and into the target rock formation. Hydraulic fracturing fluid commonly consists of water, proppant and chemical additives that open and enlarge fractures within the rock formation. These fractures can extend several hundred meters away from the wellbore.

However, hydraulic fracturing is highly controversial in many countries. Its opponents argue potential environmental damage by fracking, including risks of ground and surface water contamination, air pollution, and the triggering of earthquakes along with the consequential hazards to public health. The risk from hydraulic fracturing concerned the civil societies and environmentalists, and let started a global anti-fracking movement like The Greens/European Free Alliance, Stop Climate Change and Health and Environment Alliance (HEAL)