Kathryn Zurek realized a decade ago that we may be searching in the wrong places for clues to one of the universe’s greatest unsolved mysteries: dark matter. Despite making up an estimated 85 percent of the total mass of the universe, we haven’t yet figured out what it’s made of.

Now, Zurek, a theoretical physicist at the Department of Energy’s Lawrence Berkeley National Laboratory (Berkeley Lab), says thanks to extraordinary improvements in experimental sensitivity, “We increasingly know where not to look.” In 2006, during grad school, Zurek began to explore the concept of a new “Hidden Valley” model for physics that could hold all of the answers to dark matter.

“I noticed from a model-builder’s point of view that dark matter was extraordinarily undeveloped,” she said. It seemed as though scientists were figuratively hunting in the dark for answers. “People were focused on models of just two classes of dark matter candidates, rather than a much broader array of possibilities.” 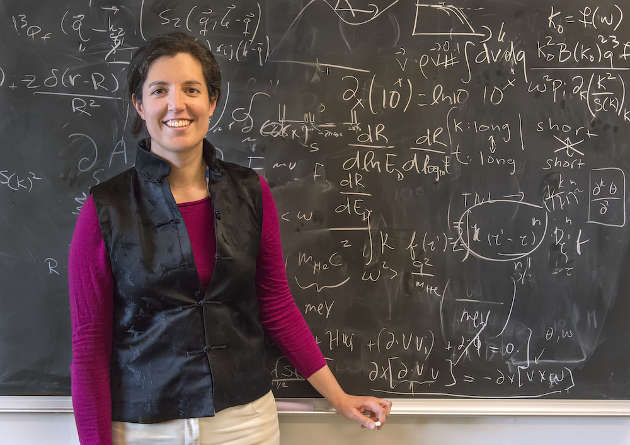 Physicist and author Alan Lightman has described dark matter as an “invisible elephant in the room”—you know it’s there because of the dent it’s making in the floorboards but you can’t see or touch it. Likewise, physicists can infer that dark matter exists in huge supply compared to normal matter because of its gravitational effects, which far exceed those expected from the matter we can see in space.

Since physicist Fritz Zwicky in 1933 measured this major discrepancy in the gravitational mass of a galaxy cluster, that he concluded was due to dark matter, the search for what dark matter is really made of has taken many forms: from deep-underground detectors to space- and ground-based observatories, balloon-borne missions and powerful particle accelerator experiments.

While there have been some candidate signals and hints, and numerous experiments have narrowed the range of energies and masses at which we are now looking for dark matter particles, the scientific community hasn’t yet embraced a dark matter discovery. 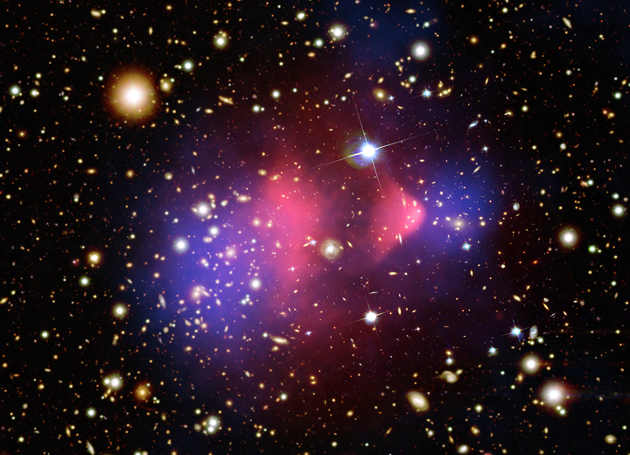 A composite image of the “bullet cluster,” a galaxy cluster formed by a collision of two clusters. The pink clumps show hot gas containing most of the normal matter, while the two blue clumps reveal where most of the mass in the clusters is actually contained. This provides evidence for dark matter since most of the mass was expected to be concentrated around the pink areas. (Image credit: X-ray image by NASA/CXC/M.Markevitch et al.; optical image by NASA/STScI, Magellan/U.Arizona/D.Clowe et al.; lensing map image by NASA/STScI, ESO WFI, Magellan/U.Arizona/D.Clowe et al.)

In 2006, as a graduate student at the University of Washington, Zurek and collaborator Matthew J. Strassler, a faculty member, published a paper, “Echoes of a Hidden Valley at Hadron Colliders,” that considered the possibility of new physics such as the existence of a new group of light (low-mass), long-lived particles that could possibly be revealed at CERN’s Large Hadron Collider, the machine that would later enable the Nobel Prize-winning discovery of the Higgs boson in 2012.

Some of the scientifically popular hypothetical particle candidates for dark matter are WIMPs (weakly interacting massive particles) and axions (very-low-mass particles). But the possibility of a rich and overlooked mix of light particles was compelling for Zurek, who began to construct models to test out the theory. 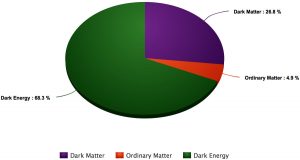 “If you had a low-mass hidden sector, you could ‘stuff’ all kinds of things inside of it,” she said. “That really set me up to start thinking about complex dark sectors, which I did as a postdoc.”

Looking back to 2008, Zurek said she felt like someone carrying around a sandwich board proclaiming that dark matter could be a stranger, manifold thing than most had imagined. “I was like that little guy with the sign.”

By coincidence, the so-called “PAMELA anomaly” was revealed that same year; data from the PAMELA space mission in 2008 had found an unexpected excess of positrons, the antimatter counterpart to electrons, at certain energies. This measurement excited physicists as a possible particle signature from the decay of dark matter, and the excess defied standard dark matter theories and opened the door to new ones.

Now that the concept of “hidden valleys” or “dark sectors” with myriad particles making up dark matter is gaining steam among scientists—Zurek spoke in late April at a three-day “Workshop on Dark Sectors”—she said she feels gratified to have worked on some of the early theoretical models.

“It’s great in one sense because these ideas really got traction,” Zurek said. “The fact that there were these experimental anomalies, that was sort of a coincidence. As a second- or third-year postdoc, this was like ‘my program’—this was the thing I was pushing. It suddenly got very popular.” 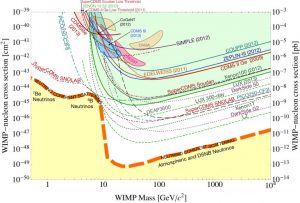 On an afternoon in late April, Zurek and her student Katelin Schutz sat together waiting to press the button to submit a new paper on a proposal to tease out a signal for light dark matter particles using an exotic, supercooled liquid known as superfluid helium. In the paper, they explain how this form of helium can probe for signals of “super light dark matter,” with an energy signature well below the reach of today’s experiments.

They are also working with Dan McKinsey, a Berkeley Lab scientist and UC Berkeley physics professor who is a superfluid helium expert, on possible designs for an experiment.

Most popular theories of WIMPs suggest a mass around 100 times the mass of a proton, a particle found at an atom’s core, for example, but a superfluid helium detector could be sensitive to masses many orders of magnitude smaller, she said.

Are we any closer to finding dark matter?

Zurek said she is surprised we haven’t yet made a discovery, but she is encouraged by the increasing sensitivity of experiments, and she said Berkeley Lab has particular expertise in high-precision detectors that will hopefully ensure its role in future experiments.

“There is a cross-fertilization from different fields of physics that has really blossomed in the last several years,” Zurek also said. She joined Berkeley Lab in 2014 after serving as an associate professor at University of Michigan, and has also spent time at the Institute for Advanced Study in Princeton, N.J.; and at Fermi National Accelerator Laboratory’s Particle Astrophysics Center.

Besides dark matter research, Zurek works on problems related to possible new physics at play in the infant universe and in the evolution of the universe’s structure, for example. Her work often is at the intersection of particle physics experiments and astrophysics observations.

Hard problems like the dark matter mystery are what drew her to physics at an early age, when she enrolled in college at the age of 15.

“I wanted to understand how the universe worked. Plus, physics was hard and I liked that. I thought it was the hardest thing you could do, which I found very appealing. I decided at 15 that I wanted to make it a career, and I just never looked back,” she said.

She knew, too, that she didn’t want to work directly on big science experiments. “I had always been fascinated about ideas: Ideas in philosophy, and the interplay between music and philosophy and physics.”

She is a classical pianist with the ability to improvise melodies—she refers to this as a “tremendous intuition in how to make sounds”—and she still turns to music when confronting a physics problem. “When you’re really stuck on a problem you never stop thinking about it. Sometimes playing the piano helps.”

When outdoors, Zurek enjoys sailing, hiking and alpine-style climbing—complete with ice axe and crampons—atop peaks such as Mount Rainer and Mount Shasta.

As for the trail ahead in the dark matter hunt, Zurek said it’s important to be nimble and to expect the unexpected.

“You don’t want to put yourself at a dead-end where you’re not exploring other possibilities,” she said.

“The thing we don’t want to forget is: We don’t know what dark matter is. You have to have room for exploratory experiments, and you probably need a lot of them.”