When a team of U.S. Navy SEALS entered the compound of Osama bin Laden in Pakistan in the early hours of May 2, 2011, it marked the successful culmination of a data-driven military and intelligence quest that began with the terrorist attacks on Sept. 11, 2001.

How it all happened and how it began was the topic of a talk given by Mark Bowden – author of The Finish: The Killing of Osama bin Laden and supplemental faculty in the University of Delaware’s Department of English — during the inaugural President’s Authors Series event held Tuesday, Dec. 4, in the Gore Recital Hall of the Roselle Center for the Arts.

In welcoming the audience of Delaware Diamonds Society members, UD President Patrick Harker noted that the series is designed to bring supporters more fully into the vibrant intellectual life found on the campus.

“I’ve talked a lot about creating an engaged, thoughtful community, the transformative benefits of it, and events like tonight are absolutely essential to community building,” Harker said. “I hope we find more opportunities to do it.” 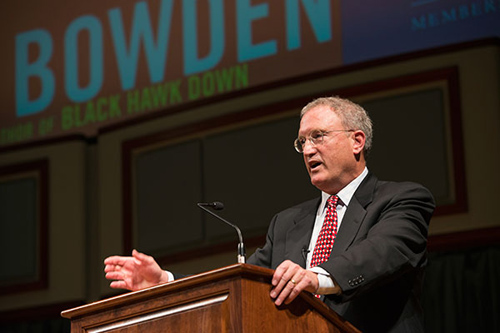 Bowden said that while many intelligence officers, software writers and military leaders were key players in the conflict, in the end it was a battle between two men — U.S. President Barack Obama and the terrorist who was killed in his compound in Abbottabad, Pakistan.

“When we were attacked in 2001, it was a different kind of enemy for the United States,” Bowden said. “We had built this enormous infrastructure, this enormous military intelligence community, basically designed on the principle of deterrent, with the notion that no nation in its right mind would launch an attack on the United States.”

What al-Qaida did, Bowden said, was to launch a very effective attack that bypassed the notion of American deterrent. The nation was facing a new kind of enemy in a different kind of war. 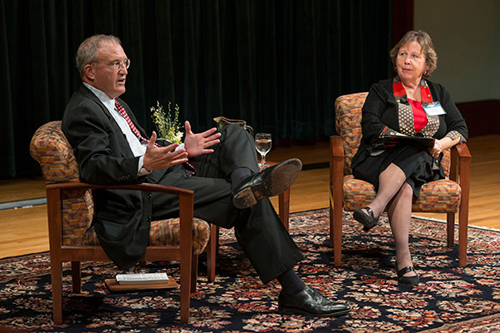 In 2003, a young state senator from Illinois named Barack Obama was busy running for the U.S. Senate.

Targets that Obama did not oppose taking up arms against were those responsible for the 9-11 terrorist attacks, Bowden said.

While presidents throughout history have had to make important decisions, with the new technology, today’s commander-in-chief owns what is in effect a sniper rifle, Bowden said.

Describing himself as “being first and foremost a storyteller,” Bowden said he approaches a story somewhat differently than the conventional journalist.

“History does not unfold in neatly packaged units waiting for writers like me to scoop up off the sidewalk,” Bowden said. In the same way that a novelist must make decisions about where a story begins and where it ends, a nonfiction writer must, as well.

Bowden said that his book is far more about the finding of bin Laden than the killing.

“It illustrates how we as a country have learned to fight in the 21st century,” Bowden said. “I think it also captures a very traumatic and tragic decade.”

In describing the two major protagonists, Bowden noted bin Laden assumed his responsibility as a teenager.

“Osama bin Laden accepted an extremist form of Islam,” Bowden said. “He essentially came to believe that it was his right to kill those who stood in the way of the religious vision that he had for the world.”

Obama, Bowden said, evolved as a political figure taking greater and greater responsibility for national concerns, including becoming president of the United States.

“He [Obama] had very deliberately thought through the obligation that that posed for him and the responsibility that was placed upon him,” Bowden said. “I wanted to show very clearly how he developed to know what his responsibility was in this regard.”

A reception followed in the Roselle Center for the Arts.

During the reception, the author signed several copies of The Finish: The Killing of Osama bin Laden, which are available for purchase in the Barnes and Noble UD Bookstore.