Former CIA officer talks about espionage in the digital age

America’s favorite spy movies often employ futuristic gadgets and high-tech devices to wow viewers, but according to a former officer in the CIA, technology may have some burdening effects on espionage.

Robert Grenier served 27 years in the CIA, formerly working as a station chief in Islamabad, a CIA representative to the White House, and most recently the head of the Counterterrorism Center. He spoke Wednesday night in Mitchell Hall as part of the Global Agenda speaker series “Spies, Lies and Sneaky Guys: Espionage and Intelligence in the Digital Age.”

Grenier said the title of the Global Agenda series struck him, having worked in the CIA Clandestine Service, donning numerous aliases to hide his true identity as he gathered intelligence from around the world.

He said the roles officers of the Clandestine Service have to undertake involve lying and cheating as well as misrepresenting oneself, essentially “everything your parents told you not to do.” 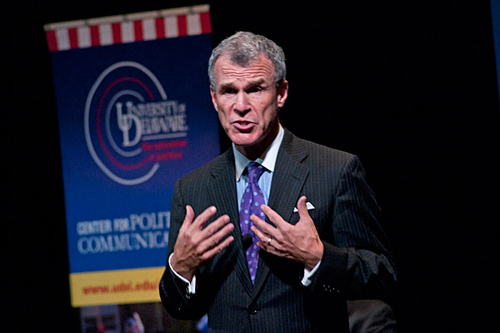 Robert Grenier, former head of the CIA Counterterrorism Center, talked about the role of technology and human intelligence in espionage during Wednesday's Global Agenda. Photo by Duane Perry

While he acknowledged these qualities could place the officers in the role of “sneaky guys,” he said most officers take morality very seriously and said the job requirements often help the officers be more moral since they are ultimately utilized to protect American citizens.

Grenier said questions have arisen with the recent boom in technology about whether human espionage should still be employed for intelligence gathering. He said the human element could not be lost, even with advancing electronic intelligence.

“At the end of the day, it is people who make decisions,” Grenier said.

But there may be legitimate concerns about challenges technology poses for the practice of espionage. When he began his career in Clandestine Service, Grenier said an identity could be created with very little concern ones cover would be blown by a suspicious individual. Nowadays, Grenier said just about anyone can do a background check and possibly discover holes in one’s alias.

Grenier said he came to realize the practice of espionage would have to change when he received a standard form letter at a hotel overseas, while undercover, thanking him for visiting again. When he realized electronic records now tracked where he had been for certain date ranges, he said he knew the practice of espionage was going to have to change.

“It was like the future in a flash that opened up before my eyes,” Grenier said. 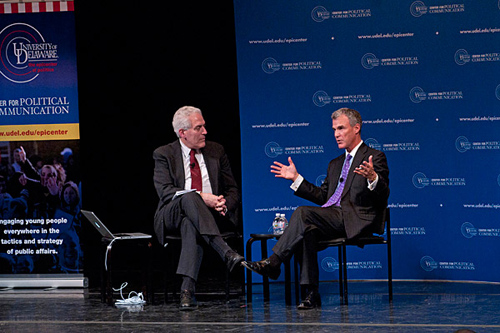 A challenge has also arisen in the form of “information overload,” and Grenier said analysts are now faced with having to prioritize which individuals they monitor and which ones they do not.

Grenier said this problem materialized with the “underwear bomber” incident of late 2009, in which a man tried to blow up a plane approaching Detroit. Though the agency received information the man posed a threat, they did not act upon it due to the abundance of other intelligence. In hindsight in this case, Grenier said one could argue the intelligence was not prioritized appropriately, but the event, regardless, was a consequence of having more electronic intelligence than human analysts.

Even with the challenges, Grenier said the technology still presents many advantages, including greater ease in identifying targets for intelligence information. He recounted an experience in North Africa where he needed to gain information about radical leftist student leaders, and he said he did so by picking up hitchhikers and asking if they knew anything about the group.

“This was really primitive, and this was difficult, and it was not at all efficient,” Grenier said.

In modern espionage, Grenier said the people of interest could have been located first by technology, and then the officers on the ground could have formed the intelligence relationships necessary.

And the amplification of communications technology may also be a blessing for the agency, including its ability to use “open source” intelligence information from the same social networks and websites average citizens use every day.

Grenier said he experienced some bad events during his time in the CIA, but never had a bad day at work. He said if he could do it all over again, he would still join the CIA, finding the profession somewhat irresistible.

“There is a seduction in the work,” Grenier said.

The series will continue on April 4 with “Red Cell!” with Eric C. Anderson, one of five career intelligence personnel on the CIA’s “Red Cell,” tasked with challenging conventional analysis. Since the 1990s he has worked at the CIA, the Defense Intelligence Agency, and as a senior intelligence officer for the U.S. government in Asia, Europe and the Middle East.