An international team of astronomers led by a former UA graduate student has set out on the largest program to date exploring the alien atmospheres of “Hot Jupiters” – massive planets in solar systems far away from our own.

An international team of scientists has secured a large program of nearly 200 hours of observing time with NASA’s Hubble Space Telescope to explore the atmospheric conditions of planets outside our solar system, known as exoplanets.

The research will focus on “Hot Jupiters,” exoplanets similar in size to Jupiter, but with temperatures of 1,000 degrees Kelvin (1,340 degrees Fahrenheit) or more because they orbit so closely to their respective stars. 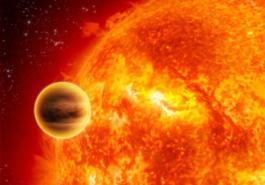 Large programs using the Hubble Space Telescope historically have led to data sets with a lasting legacy. The team is led by David Sing, who obtained his doctorate at the University of Arizona working in the departments of physics, astronomy and planetary sciences and is now at the University of Exeter in the U.K.

Gilda Ballester, an associate staff scientist at the UA’s Lunar and Planetary Laboratory who is one of the researchers participating in the project, said securing an observation program of this magnitude is an outstanding feat for a researcher at the beginning of his career.

“Data gathered using the Hubble Space Telescope will tell us more than ever before about the atmospheric composition of these planets outside our solar system,” Ballester said. “So far, only two extrasolar planets have been observed in some detail in the visible light spectrum with Hubble.”

“We are going to study eight, exploring for the first time the full diversity of Hot Jupiter atmospheres and identify important physical processes common to the entire class of these planets.”

The planets to which the team will point Hubble vary in mass (from one-fifth to one and one-half times the mass of Jupiter), radius (one to twice that of Jupiter) and temperature (1,300 to 4,600 degrees Fahrenheit).

According to Ballester, Hot Jupiters orbit their star at very close range, and their rotation is synchronous to their orbit, meaning the same side always faces the star, much like the moon always points the same side at the Earth.

This makes for a lot of heating and for interesting dynamics, for example how the intense energy streaming onto the planet’s exposed side is distributed around the planet.

If the Earth orbited the sun as closely as a typical Hot Jupiter, the star would dominate the sky to an imaginary observer looking up from the planet’s point closest to the star. The opposite side would be plunged in eternal darkness.

Ballester said the typical distance of a Hot Jupiter to its star is a mere 2 to 5 one-hundredths of the distance between the Earth and the sun. And unlike Earth, which takes a year to complete its orbit around the sun, Hot Jupiters complete the journey in only one to five days.

By understanding the chemical make-up of exoplanet atmospheres around eight Hot Jupiters and perfecting the difficult techniques needed to make these precise measurements, the researchers will also help prepare for future searches for life on exoplanets.

Lead researcher Sing said: “Astronomers have now detected hundreds of exoplanets, and we now know that some of these planets have extreme environments, unlike anything in our own solar system. Everything we have discovered so far about these planets has been puzzling so I am expecting the unexpected.”

The team aims to use the Hubble Space Telescope to detect and understand a mysterious gas in the stratospheres around these planets, causing a similar effect to the ozone layer on Earth. This gas is detectable as it absorbs light from the parent star when the planet passes in front of the star.

“When we observe an exoplanet passing in front of its star, we see it obscure part of the star light, not only with its disc, but also with its surrounding atmosphere,” Ballester explained. “The way the atmosphere influences the light passing through tells us about its chemical composition, temperature and other characteristics.”

Ballester added that the UA’s Lunar and Planetary Laboratory has a large role in the program, analyzing about 40 percent of the large amounts of data Hubble will send to Earth from its vantage point in space.

Adam Showman, an associate professor at LPL, will model the atmospheric dynamics and thermal profiles. Together, they will mentor a post-doctoral fellow to work on this program.

“Some are bigger, some are heavier, some are closer to their stars. And some have what we call a thermal inversion zone, better known as a stratosphere, where temperatures increase with altitude and where the weather tends to be calm. Others don’t have a stratosphere and we don’t know why.”

“Observing and modeling the atmospheres of those planets is a key to unraveling some of their mysteries.”