How Yale doctors are making CT scans safer for kids

Greater awareness and careful usage are bringing down the numbers of pediatric CT scans and cutting radiation exposure. Parents should weigh the benefits and risks.

(September 2013) If your child had a CT scan last year—perhaps to assess damage from a hockey injury or rule out appendicitis—he or she added to a huge statistic: more than 4 million pediatric CT scans were performed in the U.S in 2012.

The experience can leave you a little anxious, since the radiation from a CT scan may increase the risk of cancer, especially in children.

Fortunately, that picture may be changing, especially for children, who are even more susceptible to radiation-induced cancer than adults. In data compiled by the American College of Radiology’s Dose Index Registry, which tracks and categorizes the radiation given by CT scanners in U.S. hospitals, Yale-New Haven Children’s Hospital (YNHCH) recorded the lowest doses of any academic hospital in the country in many age groups and types of pediatric radiation. 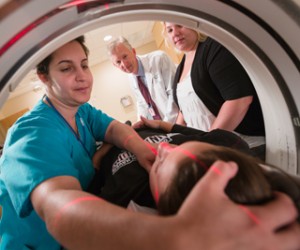 Technologist Diane Lemieux follows the red guide lights as she adjusts her patient’s head for a pediatric CT scan. When a CT scan is still the best alternative, careful planning goes into minimizing radiation. Photo by Robert Lisak

“The numbers are very impressive,” says Rob Goodman, MD, chief of pediatric diagnostic imaging at Yale. “We’ve more than halved the number of CT scans done on children despite more than doubling the number of scanners in the hospital.” In 2003 Yale-New Haven had three CT scanners and performed 4,844 CT scans on children. In 2012, with seven scanners, the hospital performed 2,344.

The low numbers are partly due to a greater awareness among physicians. Pediatric emergency specialist Lei Chen, MD, who has used the test to make urgent diagnoses of such problems as suspected appendicitis or head injury, says, “We have really started thinking critically about the risks and benefits of CT scans. We often elect alternative strategies, either watchful waiting—in cases of suspected head trauma—or ultrasound and MRI.”

Scans do save lives, prevent misdiagnoses

Computerized tomography, or CT scan, involves taking X-rays from a rotating camera and feeding the results to a powerful computer to create cross-sectional views of organs in the body. It allows doctors to detect injuries and diseases that don’t show up on standard X-rays. CT scans save countless lives, and prevent many misdiagnoses and unnecessary surgeries. As a result, its use has surged in the last two decades.

But its diagnostic power carries a cost: a CT scan can expose a patient to 100 to 500 times the amount of radiation they would get in an X-ray, increasing the patient’s risk for cancer. Children’s smaller, rapidly-changing bodies are more susceptible to ionizing radiation and hence to the risk of cancer from it.

In January 2008, the Alliance for Radiation Safety in Pediatric Imaging, representing more than 70 medical organizations, launched the Image Gently campaign to educate doctors and the public about cumulative radiation exposure. Manufacturers began building scanners that automatically adjusted the dose based on the patient’s age and weight, as well as the sensitivity of the area to be scanned. 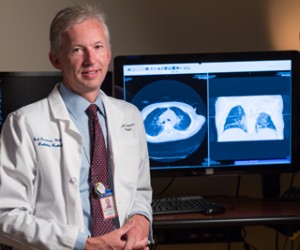 Rob Goodman, MD, began changing the use of CT scans for pediatric patients in 2003. Photo by Robert Lisak

Dr. Goodman became concerned about CT scan radiation even earlier, when he came to Yale from Oxford in 2003, and realized that Americans were getting three times more medical radiation than Europeans. He began conducting grand rounds for pediatricians on reducing radiation doses, and urged them to consider alternatives to CT scans such as ultrasound. He worked with YNHCH’s medical physicists to tweak the CT scanners to give children the least possible dose while still making images acceptable to the radiologists for diagnosis.

He expects Yale’s numbers to drop further as new software improves the grainy pictures yielded by low-dose CT scans, and as MRI, which emits no radiation, replaces CT scans for making some diagnoses.

Still more to be done in reducing radiation

Not all imaging centers have changed their approach. A study published in JAMA Pediatrics this year reported that of the estimated 4 million CT scans given every year to U. S. children under age 15, a third are unnecessary and may lead to 5,000 cases of cancer.

Still, doctors say that in some cases a CT case is the best test. “If we can get the necessary information from a plain X-ray or an MRI, we forego the CT scan,” says Yale pediatric orthopaedic surgeon Cordelia Carter, MD. However, for certain fracture patterns, such as a common ankle fracture called a triplane fracture, a CT scan provides the amount of detail a surgeon needs, she says. “MRI is better for soft tissue, CT is best to evaluate the bone and joint surfaces. Sometimes an X-ray doesn’t show us enough.”

But, Dr. Carter adds, “From an orthopaedics perspective, we are very aware of the increased radiation associated with CT scans, and we do whatever we can to minimize the patient’s exposure.” If the patient has a triplane fracture, Dr. Carter asks the technologist to image only the area she needs to see for surgical planning, and not areas outside of that field.

As with any test or treatment, parents must weigh the benefits and risks, Dr. Goodman says. “If the suspicion is high that your kid may have a lesion in the lung, don’t worry about the radiation, just do what’s best for the patient.”