How Radioactive is Our Ocean?

“Whether you agree with predictions that levels of radiation along the Pacific Coast of North America will be too low to be of human health concern or to impact fisheries and marine life, we can all agree that radiation should be monitored, and we are asking for your help to make that happen,” says Ken Buesseler, WHOI senior scientist and director of the Center for Marine and Environmental Radioactivity (CMER).

Through the website “How Radioactive is Our Ocean?” the public can support the monitoring of radiation in the ocean with tax-deductible donations to fund the analysis of existing samples or by proposing new locations and funding the samples and analysis of those sites.

“We already have dozens of seawater samples from the coast of Japan out to the middle of the Pacific, but now we need new samples—from up and down the West Coast of North America and across the Pacific. The trouble is, these samples are expensive to collect and analyze,” Buesseler says. 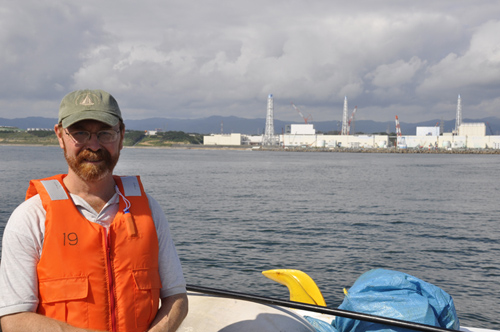 WHOI senior scientist Ken Buesseler has collected and analyzed the seawater surrounding the Fukushima Dai-ichi nuclear power plant since the 2011 disaster. As the low-level radiation travels across the Pacific, Buesseler has launched a crowd sourcing campaign and website to monitor radiation levels along the West Coast of North America. (Photo courtesy of Ken Buesseler, Woods Hole Oceanographic Institution)

To propose a new location for seawater sampling, individuals and communities will be asked to donate a minimum of $100 for seed funding. Not every proposed site can be accepted due to limits on sample throughput, but if selected, WHOI will setup a fundraising webpage to help a group reach their fundraising goal. The collection and analysis of a seawater sample costs between $550 and $600, depending upon location. Once the full amount is raised, the individual will receive a sampling kit to collect 20 liters (about five gallons) of seawater to be shipped back to the CMER lab for analysis.

The results from those analyses will be posted on an evolving map online, where you can see cesium concentrations and sponsors’ names with links to information about radioactivity in the ocean and what the levels tell us.

The Center for Marine and Environmental Radiation at the Woods Hole Oceanographic Institution has launched a citizen science website, ourradioactiveocean.org, to involve the public in the sampling, funding, and analysis needed to monitor radiation levels in seawater along the Pacific coast. Photo courtesy of Woods Hole Oceanographic Institution (Click image to enlarge)

Nearly three years after the tsunami that resulted in the Fukushima Dai-ichi nuclear power plant accident, questions remain about how much radioactive material has been released and how widely and quickly it is dispersing in the Pacific Ocean. Marine chemist Ken Buesseler at the Woods Hole Oceanographic Institution (WHOI) has been gathering samples — some from as close as half a mile from the damaged reactors — and has been analyzing this seawater for Fukushima contaminants since 2011.

No U.S. government or international agency is monitoring the spread of low levels of radiation from Fukushima along the West Coast of North America and around the Hawaiian Islands. The Center for Marine and Environmental Radioactivity (CMER) at WHOI, a private non-profit marine research and education organization, is launching a project to involve the public in gathering seawater samples and raising funds for analyses that will provide the latest information about radiation levels in the ocean. The data will be published on a website, “How Radioactive is Our Ocean?”

The world’s oceans contain many naturally occurring radioactive isotopes, as well as the remnants of nuclear weapons testing from the 1960s. Starting in 2011, fallout, runoff, and continued leaks from the Fukushima Dai-ichi nuclear power plant in Japan added to this baseline and sparked fears of wide-ranging impacts to the marine ecosystem and human health.

Although Buesseler does not expect levels to be dangerously high in the ocean or in seafood as the plume spreads 5,000 miles across the Pacific, he believes this is an evolving situation that demands careful, consistent monitoring to make sure predictions are true.

“I’m particularly excited about finding support for sampling key locations along the West Coast multiple times throughout the coming two years, because radioactivity levels are expected to be increasing,” he says.

How radioactivity is measured

Measuring radionuclides in the ocean requires a specialized gamma-detecting instrument that costs about $75,000, skilled lab personnel to operate the equipment, and a scientist to analyze the data. Fukushima contamination can be “fingerprinted” from precise measurements of the relative amounts of a long lived cesium-137 isotope with a 30 year half life, that has been in the ocean from 1960s weapons testing, to its ratio to cesium-134, which decays with a 2 year half life, and is only around from the more recent 2011 Fukushima source.

Radiation levels are measured by Bequerels (Bq), the number of radioactive decay events per second. They are reported per cubic meter of seawater (m3), which is equivalent to 1,000 liters (264 gallons). A typical seawater sample will contain just a few Bq/m3 of the cesium isotopes and much higher levels of naturally occurring radionuclides. By comparison, the limit for cesium in drinking water in the U.S. is 7,400 Bq/m3.

Latest cesium levels will be updated and reported on the website beginning January 14, 2014.

Support for this project thus far, has been provided by the Gordon and Betty Moore Foundation, the Deerbrook Charitable Trust, Onset, the Pacific Blue Foundation, and the Center for Marine and Environmental Radioactivity (CMER) at the Woods Hole Oceanographic Institution.