How manufacturers are creating the digital, intelligent and predictive factory

At two manufacturing plants, one in Mexico, the other in Malaysia, history is being made, in addition to a range of products.

The two sites are part of the global network at Jabil, one of the world’s leading design and manufacturing solution providers, owns the plants. The Florida-based company is revolutionizing its industry by creating digital, intelligent and predictive factories. These new digital factories are using machine learning, predictive analytics and the cloud to learn ahead of time when a piece of equipment might fail, instead of having it fail and dealing with the consequences and downtime.

“It’s exciting. For the first time we have been able to predict, say a solder defect, or some type of component defect, on our printed circuit board assembly before it’s occurred,” says Clint Belinsky, Jabil vice president for Global Quality. “That by itself is exciting. The fact that you can predict that and know why you predicted it is really impactful. Because the next step is to identify that as a problem and to provide specific instructions to eliminate it, so it never goes to a debug or a rework.”

The result? Yield goes up, the amount of scrap and re-work goes down, manufacturing cycle time decreases – and factory workers feel much more empowered about their jobs. 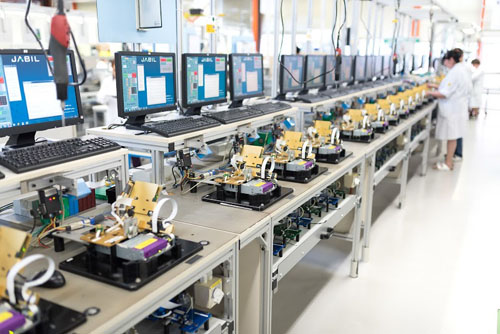 “When you’ve got individuals who are really focused on preventing a problem, it makes the whole atmosphere and culture even more quality-oriented, and that atmosphere can be very positive, very contagious,” he says.

Jabil and other companies, including Fujitsu, NEC and ZEISS, are among those working with Microsoft to reshape the way they do business in the era of an intelligence revolution.

Many manufacturers, for example, now use software to analyze real-time problems and defects in manufacturing for taking corrective action. But Jabil wanted to create a solution that would identify errors or failures early in the process – before they even occurred.

Jabil’s solution, which uses Microsoft Azure services, does just that, analyzing millions of data points from machines running dozens of steps through the manufacturing process, predicting failures earlier in the process, for example, at step 2 in a 32-step process instead of realizing the failure at step 15.

That’s a huge improvement. And the accuracy rate has been at least 80 percent in the prediction of machine processes that will slow down or fail, Belinsky says, contributing to a scrap and re-work savings of 17 percent, and an energy savings of 10 percent.

“What’s fantastic about this is the results that we received exceeded our expectations,” he says, adding that an 80 percent prediction reality is “really phenomenal – and I’m a natural challenger of numbers.”

If a problem can be detected at step 2, “instead of at step 12 or later, then you win, because it gives you the opportunity to stop and fix an issue, or stop a potential problem from happening,” Belinsky says.

“It may be taking out a tool and cleaning it, to having to divert some raw material to a different location, or having to reject it,” he says. “Either way, you’ve avoided a problem, you’ve avoided downtime, you’ve avoided scrap. And that’s a very positive impact on the bottom line, and generates a lot of positive accolades from the customer.”

The platform is in use at Jabil’s manufacturing plants in Guadalajara, Mexico and Penang, Malaysia. Jabil intends to roll out the solution to all facilities worldwide.

“All of those industries are going to be affected in a positive way as we advance in our digital manufacturing efforts,” Belinsky says.

Jabil will be at the Hannover Messe industrial fair, along with other companies that are using Microsoft technology to create manufacturing of the future now.

Among them is Fujitsu, which is showcasing its Intelligent Dashboard for connected factories that will run on an integrated Internet of Thing (IoT) platform powered by Fujitsu and Microsoft, and uses the Azure IoT Suite and Cortana.

They can ask questions and get real-time advice via a digital assistant that recognizes the voice of the person who is speaking. Using Skype Translator, customers can discuss any topics with people from different countries with different languages.

By integrating factory operational data with employee identification and the case management system, NEC’s solution also improves operational efficiencies and provides the basis for process improvements. The use of biometrics for identification raises security controls to new levels, and removes risks associated with entry passwords.

ZEISS, the market leader for industrial measurement equipment, including for the automotive industry and its suppliers, is also partnering with Microsoft to develop a new quality management solution for the digital factory.

The solution uses Azure Active Directory and the Cortana Intelligence Suite to monitor the health of a machine’s performance and when a breakdown might happen. The machine is able to monitor itself by collecting data through sensors, and can show how it compares to other machines in the factory when it comes to issues like utilization and errors.

The goal is to create integrated measuring devices that will improve the reliability of measurements, help optimize workloads and planning, as well as reduce maintenance through greater data transparency.

With these solutions, and others, it’s clear the digital manufacturing transformation is underway, using machine learning and intelligence.

“And once you start bettering that experience, whether it be for a homeowner who’s operating their dishwasher every day, or for some new and interesting wearable that we use when we’re exercising, that product experience is that much better for the customer,” says Belinsky. “And we’re in a business that protects our customers’ brand image.”