Smelling good is just part of what some beetles must do to find a mate. They have to exude the proper perfume at the right time of day and right season of the year, a UA-led team found.

A longhorned beetle’s sexy scent might make a female perk up her antennae. But when the males of several species all smell the same, a female cannot choose by cologne alone.

For these beetles to find a mate of the right species, timing is everything, according to research from a University of Arizona-led team. 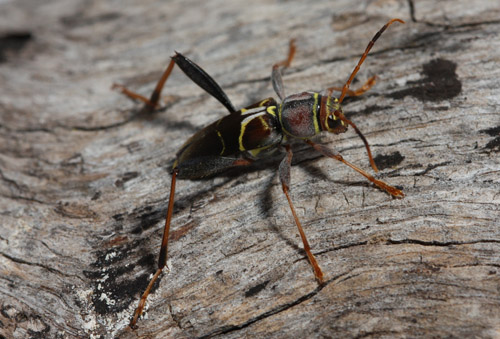 Many longhorned beetles, such as this Neoclytus mucronatus, attract mates by exuding a sex pheromone. For some species, success also requires exuding their signature perfume at just the right time of day and year. (Photo credit: Robert F. Mitchell/UA)

In addition, the team found that some of the beetle species that used the same pheromone stayed true to their species by segregating their mating activity by season of the year.

Many animals use chemicals called pheromones to communicate.

“Smell is an underappreciated sense in people — but when you talk about insects, many ‘see’ their world in chemicals,” said Mitchell, a fellow in the Postdoctoral Excellence in Research and Teaching Program. “The most common thing they say with pheromones is, ‘I’m looking for a mate.'” 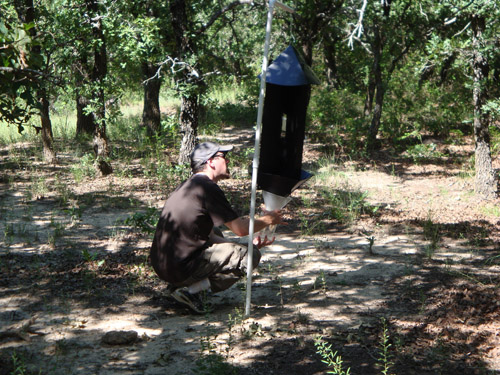 Researcher Robert Mitchell examines a pheromone-baited trap to see whether it attracted longhorned beetles from the nearby trees. Beetles that fly into the 4-foot-tall trap are funneled into the jar at the base of the trap. (Photo credit: Forrest Mitchell)

Scientists generally expect each insect species to have its own signature perfume to attract suitable mates. When an insect emits its unique sexual attractant, potential suitors can come a-courting from hundreds of yards away.

However, the family of longhorned beetles presents a puzzle: Many species use the same pheromone, Mitchell said. The situation seemed to contradict the generally accepted idea of one species-one pheromone.

Once the team figured out the various beetle species sent out their scent signals during different parts of the year and at different times of the day, it all made sense, Mitchell said.

“Our research provides a framework for understanding how insects that produce the same pheromone can produce separate signals,” he said.

To test whether longhorned beetles are attracted to a sexually alluring chemical only at certain times of day, researchers used a rotating series of bottles attached to the bottom of a scent-baited funnel trap. The mechanism rotated so that new bottle was at the bottom of the trap every two hours. (Photo courtesy of the Hanks laboratory/University of Illinois at Urbana-Champaign)

“Pheromones are promising alternatives to pesticides as a means of monitoring and controlling pests,” he said.

For example, by baiting traps with the appropriate pheromone, scientists can detect pest insects and monitor their movements. In the Western U.S., pheromones are used to combat a longhorned beetle known as the California prionus that is a pest on hops, Mitchell said.

Using pheromones also can reveal the presence of destructive invasive species such as the Asian longhorned beetle.

The research team’s paper, “Cerambycid beetle species with similar pheromones are segregated by phenology and minor pheromone components,” is featured on the cover of the May issue of the Journal of Chemical Ecology. (A list of the authors is at the end of this story.)

As part of his doctoral research at the University of Illinois, Urbana-Champaign, Mitchell studied the chemical attractants for dozens of species of longhorned beetles native to deciduous forests of eastern North America. The beetles bore into the woody stems of dead shrubs and trees.

He later focused on 11 species all attracted to the same chemical. When he and his colleagues put traps baited with that pheromone out in the woods, after 24 hours the traps contained “a big multi-species party.”

Initially, Mitchell and his colleagues were baffled. Such a multi-species party didn’t make sense, he said, because mating outside one’s species doesn’t result in viable offspring.

“We asked, ‘How do they tell each other apart if they’re all producing the same thing?'” he said.

The team had been using traps that collected all the beetles attracted in a 24-hour period.

Senior author Lawrence M. Hanks learned about a rotating trap that could separate beetles by the time of day they entered the trap. That setup allowed the scientists to test whether different species were attracted only at certain times of day.

By using the rotating traps, the researchers found some species visited primarily in the daytime, some came in the early evening and some came at night. Other experiments revealed that the 11 species also searched for mates at different times in the spring.

Finally, the team found that species completely overlapping in time would add additional scents that put off other species while attracting their own.

The scientists write in their paper that if an invasive species used the same pheromone as a complex of native species, the chemicals emitted by the natives might prevent the invaders from finding suitable mates.

“Our native beetles might be unwittingly defending us against invaders,” Mitchell said.

Alphawood Foundation of Chicago, the U.S. Department of Agriculture, the National Institutes of Health (5K12 GM000708-15) and CAPES-Foundation-Brazil funded the research.