How Containerization Has Changed the World

The rise of smartphone technology, the invention of the internet, the proliferation of clean green sources of energy; all these innovations have changed the way we live in the last several decades. But there is one invention that passes unnoticed by most people, even though it too has revolutionized the way we live in our everyday lives: the shipping container.

In this article, we will look at the history of the shipping container and how it continues to impact the global trade networks today.

Before the advent of the shipping container, transportation of goods was a laborious, costly, and time-consuming multilayered process. Shipping any object via a combination of land, sea, and air travel meant unpacking and repacking it each time, transferring it to an appropriate container for the next mode of transport. 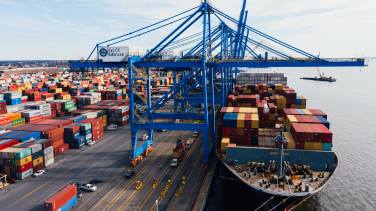 Huge warehouses were erected in ports and significant transit crossroads; there, once unloaded by workers, the goods would have to wait for uncertain amounts of time before being repacked and loaded onto the next vessel. This meant that delivery times were more difficult to predict, and there was much more space for damage, errors, and even theft. Transporting goods depended on the availability of transport from specific port cities, which limited the travel routes available. The whole process was costly and slow.

Enter Malcolm McLean, the visionary entrepreneur who realized that air, land, and sea transport could be combined in new ways. In 1956, McLean saw an opportunity to consolidate the arduous shipping process by streamlining the packing process into one standardized container that could be loaded and unloaded on any mode of transportation without needing to be repacked.

The Power of the Box

McLean owned a trucking company and saw how inefficient the system was when his truck drivers unloaded wooden crates in odd shapes and sizes. He invented and patented the first standardized shipping container. In April of 1956, McLean supervised as the first shipping container was boarded onto his tanker, the Ideal X. The ship embarked from Port Newark and successfully completed the journey from Port Newark to Houston with the container intact.

The standard-sized shipping container began to effect changes on industry, technology, and city landscapes right away. Whereas large ships would previously have taken an entire week to unload, ships of equal size could now be unloaded in a single day. In order to utilize this clever new technology, there needed to be new tools developed. Ports now needed stronger wharves, cranes that could easily lift and transfer the boxes on and off ships and trucks, and better connections to highways and railroads.

With the invention of the standardized shipping container, more goods became available more easily to more people in more places. The corresponding web of consumer connections that developed as a result of this innovation became robust and expansive.

The shipping container is directly responsible for the ease, affordability, reliability, and speed we have come to expect from product delivery services. Ordering a new pair of headphones from Amazon or a custom piece of furniture from Etsy is now not only possible but normalized. But this technology could not have existed without the invention of the standardized shipping container.

By the end of the 1900s, nearly 90% of goods were transported via shipping container. Today, there are about 20 million shipping containers in circulation across the world, which collectively make more than 200 million journeys every single year. Because hundreds of dock workers were once required to load and unload ships docked in port harbors, there have been huge shifts in the power of port cities. Cranes now move shipping containers, so docks that once employed hundreds of workers now only need a handful of manual crane operators. Once great port cities like Liverpool in the UK have seen their status as a transportation hub decline since McLean’s invention in the 1950’s, while other cities with no sea access, like Dallas, have become important interconnected transportation hubs.

Since the invention of the standardized shipping container, the huge cost cuts combined with the massive boost to speed have enabled and fed our consumer desires for more products delivered for cheaper and faster. And the ongoing success of the shipping container industry stands as a testament to the increasing demands of the consumer marketplace.

While some environmentalists may raise concerns about the amount of fossil fuels required to transport goods from afar, promoting local businesses over global transport, the cost factor remains an issue for many consumers.

In the meantime, standardized shipping containers remain one of the most significant developments in the industry in the last century, an invention that has truly reshaped the world.