How Career Dreams are Born

COLUMBUS, Ohio – A new study shows just what it takes to convince a person that she is qualified to achieve the career of her dreams.

Researchers found that it’s not enough to tell people they have the skills or the grades to make their goal a reality.

Instead, many people need a more vivid and detailed description of just how pursuing their dream career will help make them successful. 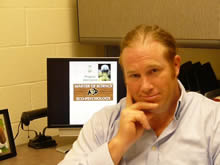 This is especially important for people who have the skills and potential to pursue a particular career, but lack the self-confidence, said Patrick Carroll, author of the study and associate professor of psychology at The Ohio State University’s Lima campus.

“Students who have chronic self-doubt may need an extra boost to pursue the dreams they are certainly able to achieve,” Carroll said.

“This study finds that what they really need is a vivid picture of what will happen if they succeed.”

The study was published online in the journal Basic and Applied Social Psychology.

The students signed up to meet with a career adviser to learn about a supposedly new master’s degree program in business psychology that would train them for “high-paying consulting positions as business psychologists.”

However, the program didn’t actually exist. The goal was to get the students interested in the program, and see how they reacted when faced with varying levels of validation to their new dreams of becoming a business psychologist. (The researchers followed a protocol to help students who may have been disappointed that there wasn’t a real program. More on that below.)

The students were then separated into four groups. Students in the control group were given an information sheet indicating no GPA requirement for the program.

The other three groups were given sheets indicating the GPA requirement was .10 below whatever they had listed as their own GPA.

In one of these groups, the “career adviser” –- who actually worked with the researchers — simply pointed out that the students’ GPA was higher than the requirement.

In another group, the validation was raised slightly: The adviser told the participants that they were exactly what the program was looking for and that it was unlikely they would be rejected if they applied.

The last group received the strongest validation to their hopes of becoming a business psychologist: They were also told they were qualified and were unlikely to be rejected if they applied. But the adviser added that it was likely that the student would be accepted with full funding and excel in the program and would graduate with numerous job offers in business psychology.

Afterward, the participants once again filled out forms asking how confident and excited they were about becoming a business psychologist and whether they expected they would be admitted. In addition, the students were given the opportunity to actually apply to the program.

The results were striking. The students in the control group and those who were simply told their GPA exceeded the program requirements didn’t embrace the possible new goal of becoming a business psychologist.

These participants did not show any elevations in self-confidence related to becoming a business psychologist and were unlikely to apply to the program or even ask for more information.

“Even when students learn that they exceed some external admissions requirement to become a business psychologist, they still have to decide whether that means they should pursue that career dream instead of any others,” Carroll said.

“They may need more validation than that to pursue this career goal.”

However, when the adviser clearly detailed the vivid prospect of success, the students were willing to embrace the pursuit of that new business psychology goal.

Specifically, students given the most vivid validation had higher levels of self-confidence immediately after meeting with the adviser and were more likely to actually apply to the business psychology program.

“Self-confidence played a key role here. Students felt more confident that they could really be successful as a business psychologist when they received a detailed picture from their adviser,” Carroll said.

Following the study, the researchers thoroughly debriefed all participants on why it was necessary to use deception to study how students, like them, naturally respond to social validation to pursue new career goals.

In addition, researchers provided all participants with detailed information on career counseling services that they could utilize on campus for help in making future career choices. This extensive debriefing was designed to remove any adverse influence of the study feedback on participants before they left, Carroll said.

After the purpose of the study was explained to them, many participants were enthusiastic about the research and its relevance in revealing how others can shape their own career decisions, he said.

Carroll said he sees the relevance of this research nearly every day, as students seek his input about career plans or the possibility of graduate school.

“Sometimes students have the grades, the motivation and the ability but simply lack the necessary self-confidence to whole-heartedly invest in the pursuit of a realistic new goal,” he said.

“This work shows how parents, teachers and counselors can steer students into the right direction to achieve their dreams.”

The findings are especially relevant now as students prepare for an uncertain job market and they, along with their teachers and guidance counselors, try to find the best career choices for them.

“Educators are trying to lead students to the most realistic career options,” Carroll said. “This research is important to understanding how students make revisions in their career goals and decide which career possibilities they should embrace.”

This research was supported by a grant from the National Institute of Mental Health.