How Beetles Hack Into Ant Colonies

Pretending to be one of them, ant-nest beetles trick ants to rear their brood — and then reward their hosts by devouring them. UA entomologists have discovered that the beetles evolve at an astonishing rate.

We’ve all heard the story of the Trojan horse, when unsuspecting Trojans opened their city’s gate to a giant wooden horse, only to find themselves ambushed by the Greek soldiers hiding inside.

But did you know that the same scenario is constantly unfolding in the insect world?

Ant-nest beetles, which belong to the genus Paussus, are among the most bizarre and fascinating insects in the animal kingdom. By hacking the complex communication systems of ants, the beetles are able to not only live among the colony as royalty but simultaneously prey on its members and trick the ants into raising their young. 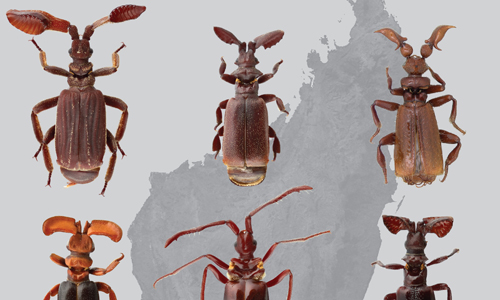 Over the past few million years, these beetles have rapidly diversified in response to adopting new ant hosts, in a process known as adaptive radiation. Remarkably, this symbiosis has proved to be among the swiftest and most sophisticated examples of adaptive radiation in the animal kingdom, according to UA scientists Wendy Moore and James Robertson in the Department of Entomology, part of the UACollege of Agriculture and Life Sciences. Their findings are published in the journal Current Biology and featured in an editorial in the journal Nature.

“The rate at which this is happening is incredible,” Moore said. “These are some of the fastest-evolving animals on Earth.”

Ants communicate with one another through a complex system of stridulation (noise making by rubbing together different parts of their body) combined with chemical messaging. Paussus beetles also stridulate and produce chemicals. Their stridulation may mimic that of their host ants, and the chemicals they secrete from their antennae are powerfully attractive to ants. Somehow, the beetles are able to use these traits to interfere with the ants’ own chemical communications and hijack the normal functioning of ant society.

While other examples of chemical trickery exist in the insect world, few other organisms in the entire animal kingdom have evolved so rapidly. Further, many species of Paussus beetles have evolved these associations with ant hosts independently in Africa, Southeast Asia and elsewhere in the Old World tropics.

Despite this shared behavior, the appearance of Paussus beetles varies wildly across species, said Robertson, a postdoctoral fellow in the Department of Entomology.

“It adds to their mystique,” he said. “These beetles are anatomically very bizarre and absolutely fascinating.” 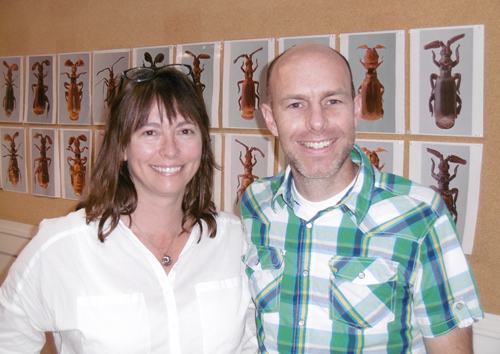 Wendy Moore and James Robertson are fascinated by the ant-nest beetles’ rapid rate of evolution. Image credit: University of Arizona

One group of Paussus beetles, common to Madagascar and known as Malagasy, can be traced back to a common ancestor that lived 2.6 million years ago. Since then, that ancestor has diverged into 86 new species of ant-nest beetles at a rate of anywhere between 380,000 and 810,000 years between species. This may sound like a long time, but in evolutionary terms, it’s a blink of an eye.

“We think that this is happening all over the world,” said Moore, associate professor of insect systematics, who has studied Paussus beetles from Madagascar, continental Africa and Southeast Asia. “These beetles are evolutionarily converging in form, and presumably in function, on completely different continents.”

In other words, the beetle species evolve similar looks and similar ways of making a living despite living in separate areas.

Moore and Robertson made the discovery by using a technique called molecular phylogenetics. The approach allowed them to study the DNA of different beetle species to help construct their evolutionary tree.

At first, the researchers were surprised by the patterns that emerged from their analyses of DNA sequences. The more genomes they investigated, the more confident they became that they were looking at an extreme case of adaptive radiation.

Up until recently, entomologists have relied mainly on comparisons of insect anatomy to establish trends in evolutionary history. According to Moore and Robertson, combining this approach with molecular analysis is a more effective way to study adaptive radiation in general.

“The convergence of these beetle species is clear,” Moore said. “Using this system, we’ve added a classic example of adaptive radiation to the lexicon of evolutionary biology.”

Moore and Robertson are now sequencing the DNA of ants found in the guts of the different beetle species, which is providing further insight into the history of ant host shifts among the beetles. The team thinks this may help explain the beetles’ rapid adaptive radiation.

“Ant host species have been identified for less than a quarter of Paussus species,” explained Moore. “If we can establish ant hosts for each species of beetle, we may be able to infer the influence of host shifts on this adaptive radiation.”

Moore and Robertson emphasized that the Paussus beetle presents a unique opportunity to study evolution in action. Understanding how rapid adaptive radiation happens can help shed light on a number of evolutionary processes throughout the animal kingdom.