How Australia got the hump with one million feral camels

A new study by a University of Exeter researcher has shed light on how an estimated one million-strong population of wild camels thriving in Australia’s remote outback have become reviled as pests and culled on a large scale.

Sarah Crowley, of the Environment and Sustainability Institute at the University of Exeter’s Penryn Campus, explored the history of the camel in Australia, from their historic role helping to create the country’s infrastructure through to their current status as unwelcome “invader.”

The deserts of the Australian outback are a notoriously inhospitable environment where few species can survive. But the dromedary camel (Camelus dromedarius) prospers where others perish, eating 80% of native plant species and obtaining much of their water through ingesting this vegetation.

Yet for numerous Australians, particularly ranchers, conservation managers, and increasingly local and national governments, camels are perceived as pests and extreme measures – including shooting them with rifles from helicopters – are being taken to reduce their population.

In her article, published in the journal Anthrozoös, Crowley proposes that today’s Australian camels exemplify the idea of “animals out of place” and discusses how they have come to inhabit this precarious position.

She said: “Reports estimate there are upwards of a million free-ranging camels in Australia and predict that this number could double every eight years. As their population burgeons, camels encroach more frequently upon human settlements and agricultural lands, raising their media profile and increasing local animosity toward them.”

The camel was first brought to Australia in the 1800s when the country was in the midst of a flurry of colonial activity. The animals were recognized by pioneers as the most appropriate mode of transport for the challenging environment because they require significantly less water, feed on a wider variety of vegetation, and are capable of carrying heavier loads than horses and donkeys. 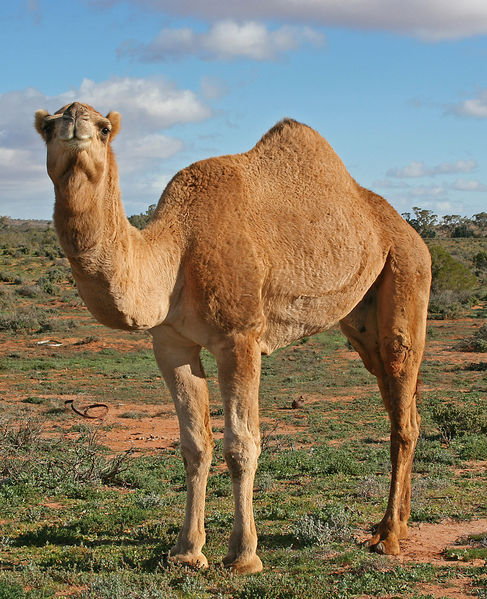 Camels therefore played a significant role in the establishment of Australia’s modern infrastructure, including the laying of the Darwin–Adelaide Overland Telegraph Line and the construction of the Transnational Railway.

Once this infrastructure was in place, however, and motorized transport became increasingly widespread, camels were no longer indispensable. In the early part of the 20th century they rapidly lost their economic value and their displaced handlers either shot their wards or released them into the outback where, quite discreetly, they thrived.

It was not until the 1980s that surveys hinted at the true extent of their numbers, and only in 2001 that reports of damage caused by camels were brought to the general populace.

Camels are not the most dainty of creatures. Dromedaries are on average six feet tall at the shoulder, rendering cattle fencing no particular obstacle to their movement. By some accounts, camels may not even see small fences and consequently walk straight through them.

Groups of camels arriving on agricultural properties and settlements in Australia, normally in times of severe drought, can also cause significant damage in their search for water.

In 2009, a large-scale culling operation began. There were objections from animal welfare groups and some landowners who were concerned that the method of culling from helicopters, leaving the bodies to waste, is inhumane. Most objectors, however, were primarily concerned that culling is economically wasteful and felt that the camels should be mustered for slaughter or export.

There are also concerns regarding the global environment, as camels may contribute to the desertification of the Australian landscape.  They are also ruminants and thus produce methane, adding to Australia’s carbon emissions. Crowley does not question the accuracy or significance of this, but points out that the environmental impacts of even 1,000,000 feral camels pales in comparison to that of the 28,500,000 cattle currently residing in the country.  Still, when dust storms gathered over Sydney in 2009, media reports implied that the camel was the culprit.

Camels have in recent times been referred to in Australia as “humped pests,” “a plague,” a “real danger” and “menacing,” and their actions described as “ravaging” and “marauding.”

Crowley added: “These terms show how camels have suddenly been attributed agency – their crossing of acceptable human boundaries is somehow deemed purposeful and rebellious. These accusations lie in stark contrast to the praise laid upon those dromedaries who assisted colonists in the exploration and establishment of modern Australia, and highlight how temporal changes in culture—specifically, shifting economic and environmental values—have affected human interpretations of the presence, purpose, and even behavior of Australian camels.”