How are Americans practicing religion during the pandemic?

An overwhelming majority of people in the United States support restricting or suspending in-person religious services during the COVID-19 outbreak, according to a new poll from the University of Chicago Divinity School and the Associated Press-NORC Center for Public Affairs. 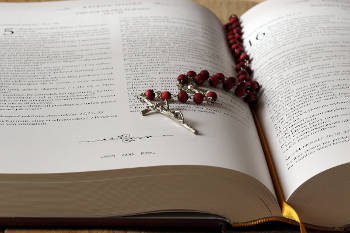 By comparison, 67% say people should be allowed to visit outdoor spaces like parks or beaches with restrictions. Democrats and independents are more skeptical than Republicans of opening up each of these things to the public without restrictions during the outbreak.

Those with a religious affiliation also report changes in behavior, with only 7% being part of a congregation that is currently open. More are watching live-streaming services weekly (33% now vs. 19% in 2019). Fewer are attending in-person services (7% vs. 27%). Private prayer has remained relatively constant at 56%.

Just over a third of Americans think that prohibiting in-person services in response to COVID-19 violates freedom of religion. That number was higher among those with a religious affiliation (36%) than those without (24%), even when accounting for other demographic factors like partisanship.

Overall, 47% of Americans are very or extremely worried that they or someone in their family will be infected with the coronavirus, a number that has increased since February and early March. Eighteen percent are worried about being infected with the flu.

While nearly half the public is very or extremely worried about infection, even more are taking steps to limit their exposure to, and slow the spread of, the virus. More than 80% are limiting trips outside the house and keeping a 6-foot radius when interacting with others. Roughly three-fourths are limiting their interactions with others to groups or 10 or less, avoiding other people as much as possible, and wearing a mask when leaving the home.

Many remain in favor of measures put in place in response to the coronavirus outbreak, but support has declined since April. Notably, although 71% support requiring Americans to stay at home except for essential errands, 85% are practicing this behavior anyway.

The nationwide poll was conducted April 30-May 4, 2020, using the AmeriSpeak® Panel, the probability-based panel of NORC at the University of Chicago. Online and telephone interviews using landlines and cell phones were conducted with 1,002 adults. The margin of sampling error is plus or minus 4.2 percentage points.