LAS VEGAS — Red Bull Air Race pilot Kirby Chambliss is huddled in front of a laptop screen with two engineers from Microsoft Research, their gaze intent on a series of squiggly blue lines scrawled over a three-dimensional map of the race course.

The lines have been drawn by Chambliss’s airplane, using technology that can track the exact path he took through a series of training runs at the airborne race track at Las Vegas Motor Speedway.

In the end, the less than minute-long race will come down to Chambliss’s ability to make split-second decisions while going more than 200 miles per hour seated in a tiny cockpit, sometimes while upside down.

But this season, his human talent as a pilot has been augmented by the technical insight of Microsoft researchers. For months, the research team has been traversing the globe with Chambliss, using control theory, robotics, machine learning and path planning to help the pilot figure out the most efficient path through the high-speed, low-altitude courses. 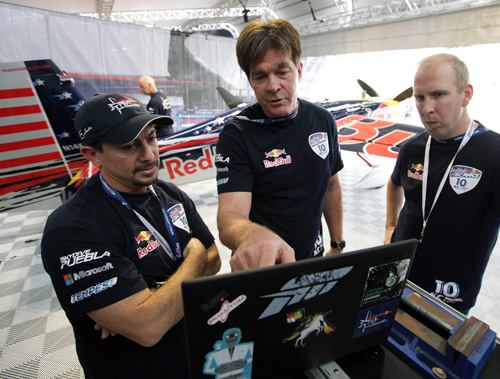 Chambliss works with Microsoft Research engineers Michael Zyskowski, left, and Rick Rogahn, right, to come up with the best route to use during the Red Bull Air Race competition. Image credit: Microsoft

The sophisticated data analysis is aimed at shaving anywhere from a tenth to a hundredth of a second off Chambliss’s time in any given turn, because this is the kind of competition that can literally be won or lost in the blink of an eye.

For the Microsoft researchers, the work also is also playing a significant role in their broader artificial intelligence and robotics research.

Ashish Kapoor, a senior researcher with Microsoft who spearheaded the collaboration with Chambliss, said the challenges that Chambliss faces in making sure his plane flies through the narrow race pylons without hitting any edges is similar to what a robot might face in trying to navigate unpredictable terrain safely and efficiently.

As part of this project, Kapoor and his team have created a suite of algorithms and techniques that could be used to help robots and drones with those navigation challenges. It’s still a research project for now, but Kapoor said it’s a step toward tools that could be used in real-world scenarios. 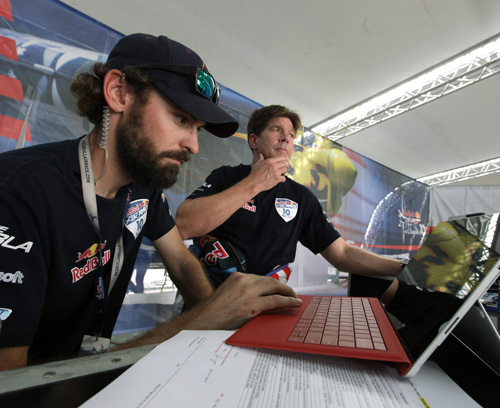 Chambliss’s chief technician, Jason Resop, in foreground, says the changes they made as a result of the Microsoft collaboration will really pay off next season. Image credit: Microsoft

Two pylons and one tricky turn

Here in Las Vegas, the researchers are focused on getting Chambliss through the final race of the Red Bull season in the fastest and most efficient way.

It’s the Friday before the race – a training day for the pilots – and everyone appears to be most focused on one turn, which requires the pilots to pass through two pylons and then immediately make what amounts to a complete U-turn to speed back toward the last maneuvers of the course.

It would be a complex turn under the best of circumstances, but in this case the pilots also have to make the turn especially tight to avoid a Federal Aviation Administration directive not to pass too close to an active roadway directly parallel to that portion of the race track.

Team Chambliss arrived at the race prepared, with simulations from the Microsoft Research team showing the pilot what the optimal flight path through the race course would be.

Now the two Microsoft engineers — Rick Rogahn and Michael Zyskowski – are in the hangar, showing Chambliss the path he actually took through some early training runs, when high winds and generally unstable weather seemed to dog all the pilots.

After analyzing his performance and comparing it to the other pilots in the race, Chambliss decides to try an unorthodox path through the pylons, coming in slightly diagonally and making a quick horizontal maneuver directly after the turn. The approach is risky, though – if a crosswind comes up, it could blow him into the pylons.

It’s a funky-looking move that will help move Chambliss to the top of the pack in the final training run on Saturday. But, it also will quickly be emulated in some form by many other pilots on the track during the first qualifying race.

Chambliss ends the qualifying round in seventh place. The team is happy with his performance, and feels like the research has helped them.

But everyone is nervous for race day. The weather forecast is uncertain and the wind patterns are changing rapidly, and that will make it hard to predict how to best approach the course until he is in the air.

Even as they work to improve Chambliss’s performance in each race this season, the researchers and the team both expect the data they have gathered to have the biggest payoff next season. That’s when they say they can really apply what they learned to make the major changes that could push Chambliss up in the standings.

“This is a big improvement, but it’s just the beginning,” said Jason Resop, Chambliss’s chief technician.

So, they collaborated with researchers from The University of Kansas to add winglets, which modify the wings so they turn up at the ends and are intended to reduce drag. They also have modified the plane’s body to make it lower and more streamlined.

The final day of competition dawns cloudy and uncertain. As the first set of eliminations get under way, the wind is picking up and rain drops are falling. The pilots, who only the day before were flying through the course with few problems, are suddenly hitting pylons and racking up penalties.

In the end, Chambliss suffers the same fate, and is knocked out of the race early after receiving a two-second penalty for not having level wings when he passed through a gate, which isn’t allowed.

It’s a frustrating end to a promising race, but the team is already looking ahead to the off-season, when they can work on the airplane and on the analysis the researchers have gathered.

“I think for next year we’re going to be in a really, really good position,” Chambliss said.

AI takes to the skies