Hour of Code: When creativity and logic spark that ‘aha’ moment for young people

Allan La Grenade-Finch remembers the moment an 8th grader, a “great kid” who often sat in the back of class and struggled with science, “lit up” during last year’s Hour of Code at Cardozo Education Campus in Washington, D.C.

“Toward the end of the lesson, I asked the class, ‘Hey, does anyone want to show off what they made?’ and a lot of students were kind of shy. But someone’s hand shot up really quickly to volunteer,” La Grenade-Finch says. It was the boy who sat in the back of the class.

He had created a game during Hour of Code, and “was very adamant about wanting to share.” The boy “really enjoyed not only the experience of learning that coding was something that he could do, but he also realized he really enjoyed explaining exactly how he got there,” says La Grenade-Finch. 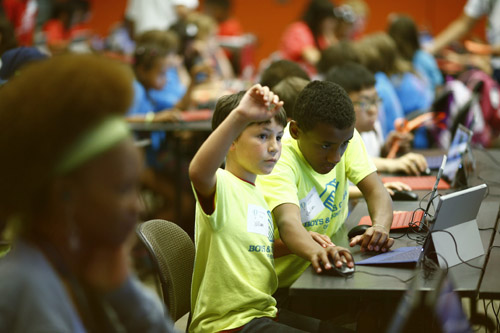 Bill Parks was among the youths from the Seattle area who learned how to code last summer at Microsoft, and now says he wants to be either a software engineer or coder. Image credit: Microsoft

That’s part of the power of the Hour of Code, created by Code.org, and being held this week around the world. Microsoft is a founding supporter of Code.org, as part of its global YouthSpark initiative to increase access to computer science education for all youth worldwide, especially those from under-represented backgrounds. In September, Microsoft CEO Satya Nadella announced an expansion of the YouthSpark program with a $75 million commitment in community investments globally over the next three years.

During this week’s Hour of Code, millions of young people from around the globe will take their first steps into the world of coding and computer science, an important part of foundational learning that helps develop problem-solving skills and computational thinking. Thousands of Microsoft employees and members of its technical communities, such as the Microsoft Student Partners (MSPs) and the Most Valuable Professionals (MVPs), will also teach Hour of Code worldwide. 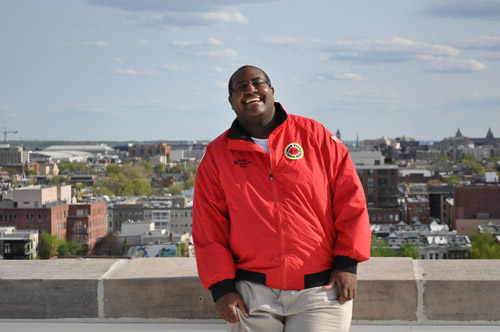 In the U.S., Microsoft stores will host more than 700 free Hour of Code workshops. All Microsoft stores are committed to helping students of all ages get excited about technology, giving them the tools and tutorials they need to get skilled in coding – from community grants to free in-store classes and workshops. While there are special workshops for Computer Science Education Week, there are also free technology workshops for youngsters that are held year-round at the stores.

Bill Parks, 9, had his first experience with coding at the Microsoft campus in Redmond, last summer. He was among the children from the Seattle area, including from the Boys & Girls Club of King County, who helped create a Guinness World Record for the “Most People Trained in Computer Programming in 8 Hours.”

Bill, who likes to draw, says coding showed him there’s an outlet for “people who want to be creative and who love technology.” He says he wants be a software engineer, or coder – and hopes to do it someday back on Microsoft’s campus as an adult.

His mom, Elizabeth Desbien, is effusive about her son’s experience. “For him to be able to go and see that being able to do coding creates a whole different world that you can be in, and spark that part of his imagination, it was just amazing,” she says. 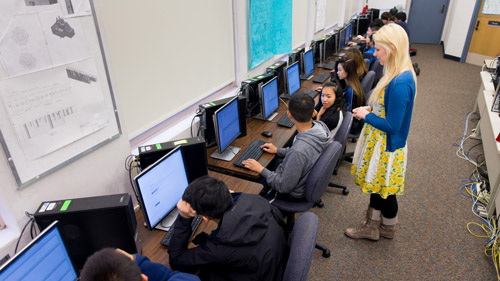 A new “Minecraft”-inspired coding tutorial for Hour of Code, created by the game’s designers in collaboration with Code.org engineers, is available to introduce young people to basic coding. Released Nov. 16, more than 2.4 million people have kicked off the tutorial so far.

“A lot of the kids are very familiar with ‘Minecraft.’ They play all the time, or their friends do, so it’s a very, very on-topic and relevant way to get them to code,” says La Grenade-Finch, a team leader for nonprofit educational organization City Year. City Year works to bridge the gap in high-poverty communities between what schools were designed to provide, and what students actually need outside of the basics. 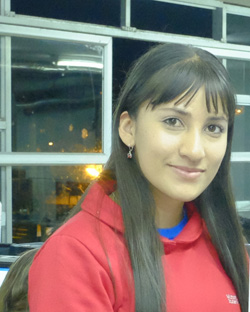 The Cardozo Education Campus, a combined middle school and high school with 800 students, last year had between 50 and 60 attend Hour of Code. Not only was what they learned transformative – but who they saw teaching it was as well.

Several staffers from Microsoft’s Washington, D.C. office came to help teach Hour of Code, including some who are African-American.

“The kids were like, ‘Wow, they work for Microsoft,’ and they couldn’t believe it,” says La Grenade-Finch, who is African-American. “We’re not represented very much in the technical fields, and it was great for Microsoft to have those kinds of role models there.”

Kasey Champion is another kind of role model for students, one whose last name suits her: She’s a software engineer for Microsoft in Redmond, Washington, and will be teaching Hour of Code this year. She already helps teach computer science to students at Franklin High School in Seattle through YouthSpark’s TEALS program, which puts computer scientists into the classroom to team-teach with regular teachers.

Champion says she’s a “kid of the ‘90s,” who “grew up being very aware of tech as this new thing,” but didn’t have computer science education available to her in high school. Even now, only 25 percent of U.S. high schools provide such classes.

Champion found computer science stimulating and creative. “Another reason computer science worked really well for me – and I’m not going to lie – I’m not the best with rigid authoritarian structures,” she says.

In her work, she says, “I like that I can wear what I want, and I’m judged based on what I produce, not how I’m dressed that day. Or, that my opinion is respected based on the things I’ve produced, and that is so in contrast to things that I experienced in high school, where it was very rigid.”

Champion is passionate about teaching computer science to young people, saying, “It is amazing how this skill set can help kids find a path, especially because there are so many different things you can do with it.”

And the need for the computer scientists in the U.S. is huge, with nearly 586,700 open computing jobs nationwide now. By 2020, there will be 1.4 million computer science-related jobs. U.S. college graduates are expected to fill less than a third of those jobs. And currently, less than 25 percent of high schools offer computer science education.

“I don’t want any kids who could benefit from this opportunity to literally not know about it,” says Champion.

The opportunities created by a computer science education are global as well.

In Bogotá, Colombia, Diana Carolina Torres Viasus, an infrastructure engineer who is also a member of the Microsoft Most Valuable Professional community, and previously a Student Partner and a YouthSpark Advocate, teaches Hour of Code so that young people can start to learn “the universal language of logic.”

Coding, she says, helps “strengthen logical thinking and critical reasoning,” and develops “each student’s abilities, which will help them make better daily decisions.”

Torres Viasus learned coding when she was 15. The fun of it, she says, is being “able to create from scratch what is in your imagination.”

Mateusz Hoffman, Microsoft Student Partner, and a software developer in Cracow, Poland, will be helping to lead Hour of Code this week in his country. He is also a technical speaker who is “passionate” about IT evangelism, he says.

Coding “is really important because nowadays algorithmic thinking is the most important skill” to have in life because it can be applied to education, a career or just day-to-day life, Hoffman says.

He would choose to be nowhere else this week but helping young people learn during the Hour of Code.

“Kids are the future of the world,” he says.