Researchers at Yale and Stanford have provided the most conclusive evidence to date that a rheumatoid arthritis drug can also be used to grow hair on patients with a disease that causes disfiguring hair loss.

Alopecia areata is a frequently devastating autoimmune disease causing patchy or complete hair loss across the body, including loss of eyebrows and eyelashes. Current therapies are not reliably effective.

In a clinical trial involving 66 adults with alopecia areata, more than half saw hair regrowth and one-third recovered more than 50% of their initial scalp hair loss after three months of taking the arthritis drug tofacitinib citrate 5 mg, twice daily.

The study was published Sept. 22 in JCI Insight. 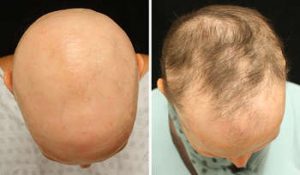 “This study demonstrates the drug is effective for treating alopecia areata,” said Dr. Brett A. King of Yale School of Medicine, who designed the study with Dr. Brittany Craiglow.

In 2014, King showed that tofacitinib, marketed as Xeljanz, could be used to treat alopecia areata. The new study confirms the validity of that report and builds a case for pursuing treatment of the disease with this and similar drugs.

“The only missing pieces are, one, the results of treatment over longer periods of time and, two, looking at treatment of the pediatric age group, where the disease frequently shows up first and can be particularly devastating,” King said. “We’ll have those results soon.”

The study was limited by short duration; side effects were mild, he said.

Tofacitinib appears to stop the immune system attack on the hair follicle in alopecia areata. Evaluation of scalp biopsies taken from patients before and during treatment showed the biology underlying this process. Co-authors at Columbia University assisted in identifying genes that could potentially be used to predict individual patient response to treatment in the future.

The work was supported in part by the U.S. Department of Veterans Affairs Office of Research and Development, National Institute of Arthritis and Musculoskeletal and Skin Diseases National Institutes of Health grant, and The Ranjini and Ajay Poddar Resource Fund for Dermatologic Diseases Research.

King has served on advisory boards or is a consultant for Pfizer, Eli Lilly, Concert Pharmaceuticals, and Aclaris Therapeutics.