A national, five-year study of care for inmates with HIV brought strangers together, produced policy change in the Delaware Department of Corrections and documented the importance of good communication and coordinated care for those who return to the community. But many challenges remain in preventing, detecting and treating HIV in offender populations.

Christy Visher, director of the University of Delaware’s Center for Drug and Health Studies, and her research team – Steven Martin, associate director, Daniel O’Connell, scientist, and several graduate students from the Department of Sociology and Criminal Justice – collaborated with eight other research centers on the study, which was supported by the National Institute on Drug Abuse. 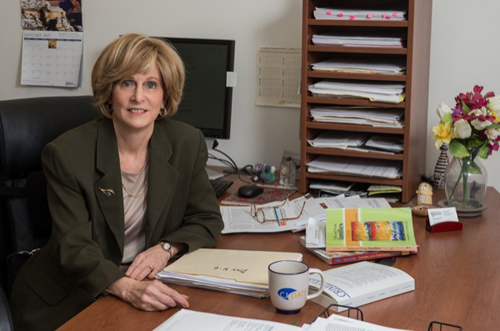 Christy Visher leads a UD research team that has studied HIV treatment policy for inmates in the state. Photo by Kathy F. Atkinson

Results of that work and recommendations from work with service providers in Delaware’s correctional system and community treatment centers have been published in a series of reports, including a Delaware case study in the April issue of The Journal of Correctional Health Care.

Researchers in these studies are looking for ways to get effective HIV programs and interventions out of the laboratory of controlled studies and into real-world practice. That kind of systemic change is often difficult, especially in a high-turnover system where training time is limited and other demands press in.

The stakes are high, though, and researchers agree that critical gaps in care and treatment exist, especially when inmates are released from custody.

Improving HIV services and treatment for inmates is considered a significant public health concern. Inmates are considered at high risk for HIV, the virus that causes AIDS, and its prevalence among inmates is more than twice that of the general population.

Poor or inconsistent follow-up after release can mean disastrous consequences. Researchers in these studies were testing ways to sustain prevention efforts, testing and treatment for those transitioning into the community.

According to figures from the Bureau of Justice Statistics (BJS), about 1 percent of the nation’s 2.2 million inmates had HIV/AIDS in 2012, the most recent figures available. Testing requirements and treatment vary from state to state, but a BJS report published in February found that many with HIV get treatment with anti-retroviral drugs while they are incarcerated – about 84 percent in state and federal prisons, about 66 percent in local jails.

But those drugs must be used consistently and must be continued after release. If the patient has no further treatment or fails to take the medication, “they not only get sicker but the drugs can stop working,” Visher said.

The medication averages about $2,600 per month per inmate, he said. In December, the total cost of HIV medication came to $221,718.

As a result, efficiencies were identified, better understanding emerged of the challenges faced on both sides of the fence, and recommendations were developed to improve services and care.

The community treatment participants came from Christiana Care Health System’s HIV Wellness clinic in Wilmington, which has about 900 clients on a regular basis, Visher said.

Those meetings were enlightening to both sides, Visher said, but she does not know if the connections and changes they produced are sustainable. When key people are promoted or transferred or contracts change, and new staff members are not up to speed on the importance of the follow-up, information can be lost.

“We’ve had a couple different contractors,” Welch said, “and every time we have a new contractor there are a lot of people coming in and out of the system. Sometimes it’s difficult to make sure all the infectious control nurses are up to speed on what happens.”

The Christiana Care community clinics around the state are more consistently staffed, he said, and that partnership has been solid for 25 years.

“The challenges there are the same as many other states have – how do you make sure people show up?” he said.

Some recent changes were written into DOC policy and now appear on forms and other procedural documents, making it much more likely that those changes will survive personnel changes, said Arlene Bincsik, director of the clinic for Christiana Care.

The relay of information is a critical factor in caring for this population, she said.

“Delaware’s HIV epidemic has had a tremendous impact on patients who are traditionally medically underserved,” she said. “Seventy percent are minorities, many have a high degree of health illiteracy, mental health problems, substance abuse problems, and consequently have contact with core institutions in our state.”

When information is inadequate, it can affect care in significant ways.

Historically, for example, there has been no mandatory HIV testing for those entering the corrections system. If an inmate doesn’t alert officials, the health care team won’t know that person has AIDS.

As a result of the “change team” discussions, a question now has been added to the intake questionnaire, asking the new inmate if he or she wanted to be tested for HIV. Testing has increased as a result, nurses say, and that leads to more effective care and greater continuity of treatment.

“The second part of that process is sharing information with the patient or inmate’s permission so that the provider in the correctional setting knows what treatment they are on, what is working and what isn’t,” Bincsik said. “If they are being released, information has to flow both ways. I think this part – facilitating the information – is what was really significant. We had tried to implement improvements with the Department of Corrections but nothing ever stuck. We feel that the involvement of the University of Delaware and the formalized process helped.”

DOC nurses and staff were supportive of the efforts and the goals behind them, and that approach makes this work better, too.

“When things work properly, the continuity is extremely tight,” said Karen Swanson, clinical nursing coordinator for the Christiana clinic. “The patients do not miss medications if we’re aware of what medicines they were on. It really does work and it has improved the continuity of patients’ care.”

The method used by Visher’s team – recruiting change team members from both service areas – was productive in this case, all sides said.

But will that catch on? Will it survive other pressures and changes within the criminal justice and community health systems?

“The research enterprise helped activate this,” Visher said, “but can this be done without research? It takes a very strong administrator to say, ‘I’ve read about this. This is the problem and this is how we’re going to solve it.’”

Visher joined the University of Delaware faculty in 2008 after working as a senior scientist for the U.S. Department of Justice and a senior associate with The Urban Institute in Washington, D.C. Her research has covered many aspects of criminal justice and substance abuse.