Researchers found specific racial/ethnic differences in discussions of HIV medicine adherence in a newly published analysis of recorded office visits between 45 doctors and nurse practitioners and more than 400 patients.

PROVIDENCE, R.I. [Brown University] — A lot of evidence shows that a patients’ race or ethnicity is associated with differences in how health care providers communicate with them, the health care they receive, and their health outcomes. In HIV care, a key to those outcomes is whether people take their medications as prescribed. A new study of the doctor-patient dialogue about HIV drug adherence found several specific differences in those conversations depending on patients’ race and ethnicity.

The study, which appears online Jan. 25 in the journal AIDS and Behavior, is based on a highly structured analysis of recorded office visits between 45 health care providers and 404 patients, 245 of whom were black and 59 of whom were Hispanic. Researchers used the Generalized Medical Interaction Analysis, which divides the dialogue into units called “utterances” based on speech acts such as asking questions, giving information, giving instructions, making requests, or expressing desires. It also classifies the topic or subject matter of each utterance. 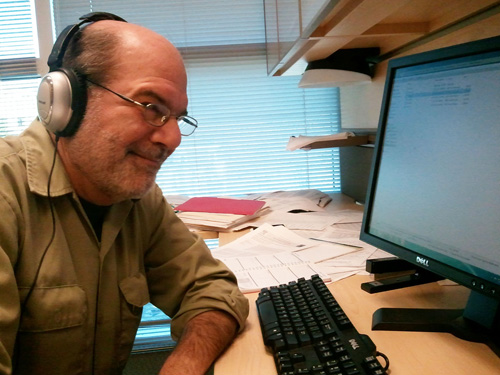 In HIV care, compliance with a medication plan is crucially important to health outcome, and communication between patient and care giver is crucial to compliance. M. Barton Laws and colleagues found differences in communicatiion varied with patients’ race and ethnicity. Image credit: David Orenstein/Brown University

Laws said that the research does not reveal why providers – 34 of whom were doctors and 30 of whom were white, with most of the rest of Asian ancestry — talked more with minority patients than with whites about adherence. One hypothesis – yet to be tested – is that the providers may be attempting to compensate for what they read in studies about lower adherence among minorities.

“The possibility that seems most compelling to me is the doctors don’t trust their black and Hispanic patients as much to be adherent,” Laws said. “It has been epidemiologically observed that they do tend to be less adherent, but it’s not because they are black or Hispanic.”

Other factors likely cause a lack of adherence, he said, but how the providers spoke to minority patients didn’t correlate with whether they were adherent. Doctors also didn’t spend much time trying to find out whether patients faced barriers to staying on their medications and helping find solutions.

In previous research analyzing office visits, Laws and colleagues found that physicians generally tended to use more directives than engage in problem solving when addressing HIV adherence. But research in behavioral counseling shows that simply exhorting people again and again does not make them more likely to engage in a desired behavior.

The emphasis on directives, rather than problem solving, is likely a product of how providers relate to all patients, he said, regardless of race. However, the other differences in the overall visits are suggestive of ways in which differences in culture and background may affect communication.

Laws cautioned that the current study does not examine whether the racial differences in the dialogue lead to different clinical outcomes, but that question can now be investigated.

“We’ve found there is something going on and it would be good to understand it better,” Laws said. Ongoing work with collaborators is assessing whether provider communication styles can be changed, and how communication patterns are associated with outcomes.