Ten-year-old Momo Sutton’s feet danced on the floor while the rest of her tried to sit patiently, her face beaming with anticipation as Easton LaChappelle carefully lifted his invention out of its box. Once she put it on, she already had four favorites by lunchtime:

“Look, I can make a heart with my hands!”

“I just gave everyone high-fives, right down the line – that’s my favorite thing so far!”

It was something both the girl and the 21-year-old inventor had dreamed of – separately – for years: an arm and hand with functional, moving fingers to replace the glorified hooks Momo had been using since she was 4. LaChappelle had put off college and invested six years of his young life into researching, making and testing robotic hands, leading to the point where he was able to scan Momo’s left arm and 3D-print a working replica for her to use on the right side, complete with matching fingernails.

He’s now making this process available through his new company, Unlimited Tomorrow, to give amputees an affordable and high-tech alternative to traditional, costly prostheses. “I hope this will help tens of thousands of Momos around the world,” LaChappelle said. 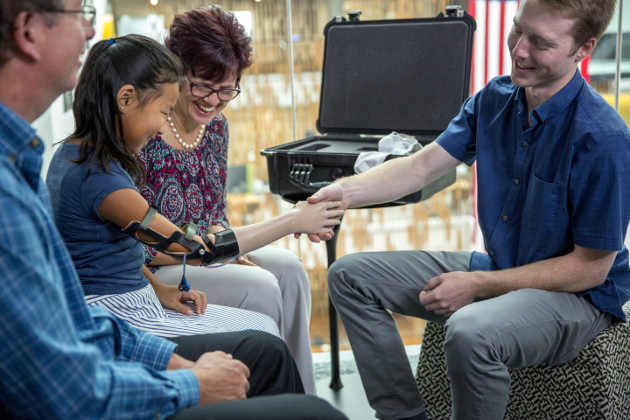 LaChappelle shows Momo how to use her new arm with a handshake as her parents, Mark Sutton and Sandy Andriaccio, look on. (Photo by Brooke Fitts)

Momo’s right arm ends just below her elbow, where the bones are fused together. Congenital differences and amputations are especially hard for children, who grow so quickly they have to be fitted for new prosthetic limbs every year or two. Advanced prostheses can cost upwards of $100,000, so kids often have to wait until they’re adults to get one. That means they’re stuck with basic models that limit their movement – like a hook-and-pulley system for an arm and hand – even as their growing brains are primed for learning new activities such as swimming, riding bikes, writing and more.

LaChappelle learned about these challenges accidentally.

Growing up in rural Colorado, the curious boy tinkered with electronics to stem the boredom, tearing apart microwave ovens and radios and putting them back together. By age 14, and “just for fun,” he had developed a robotic hand using Legos, fishing line, electrical tubing and small motors from model airplanes. He kept fiddling with it to make it better, scouring the internet for open-source information and help that wasn’t available in his small town, and conducting email or Skype interviews with international experts in robotics and engineering.

“There are so many opportunities in today’s world to explore and find your passion,” LaChappelle said. “I was able to communicate with people all around the world. They didn’t know I was 14 and living in Colorado. I was just someone who wanted to know more about electronics. That’s what technology has enabled us to do.”

For his 16th birthday in 2011, he split the cost of a $500 3D printer with his parents and printed a robotic hand, powered by a windshield-wiper motor, that the wearer could move based on brain wave signals emitted from an EEG headset. He submitted the project in a science fair and watched curiously as a little girl emerged from the throngs in the exhibit hall and began examining, in detail, how the fingers moved.

The girl, LaChappelle learned from her parents, had a prosthetic arm from her right elbow to her fingertips – a “human-like claw,” similar to the one he would later see on Momo, that only had one motion: to open or close. It was the first time he had met anyone who used a prosthesis, and he was stunned when her parents told him how much it had cost.

“This thing is $80,000, and I made this arm that’s better than this for a couple hundred dollars in my bedroom,” LaChappelle recalls thinking.

That science-fair project, which was featured in magazines such as Popular Science, not only won the high-schooler a global science prize, a meeting with President Obama and a summer internship with NASA; it also launched him on a course with a purpose.

A TED talk LaChappelle gave during his NASA stint caught the attention of self-help guru Tony Robbins, who offered assistance and guided the 18-year-old in founding Unlimited Tomorrow. Its mission: “To make technology accessible to those who need it most.”

Driven to chase his passion, LaChappelle put off college, rejiggered a Microsoft Xbox Kinect system to scan hands and arms and began working on a device that would be functional, not just fun. He studied brain and muscle control and talked with amputees to understand what would help them most.

Meanwhile, Momo and her mother, Sandy Andriaccio, attended an event at the Shriners Hospital in Tampa, Florida – the group is known for its work on pediatric orthopedic care – where the outgoing girl struck up a conversation with Zachary Hurst, president of the nonprofit M.U.C.H. Foundation. He asked Momo what her dreams were, and without hesitation she told him she wanted an arm with fingers that move. “We can do that,” Hurst told her.

Andriaccio’s eyes widened, and she swiped her hand across her neck, trying to signal to Hurst not to promise something that could cost $120,000. But Hurst had seen the stories about LaChappelle and immediately set about connecting Momo with him. Her situation reminded LaChappelle of the little girl who had inspired him at the science fair, and he decided to ask her to be the test case for his new model.

LaChappelle’s efforts had intrigued a team at Microsoft, which invited him to the company’s headquarters in Redmond, Washington, and set him up with a group of 20 like-minded makers and engineers at the Advanced Prototyping Center. They helped accelerate his vision, using 3D printing and open-source platforms.

LaChappelle had someone 3D-scan Momo’s left arm at her home in Florida with a simple, $100 webcam that can plug into any laptop, then designed an artificial replica that was 3D-printed using UV-curable resin that weighs less than a pound. Its flexible fingers have individual joints and go limp if they smack into something, just like flesh fingers do, but they’re strong enough to exert 10 pounds of pressure to hold items. The arm attaches to Momo’s residual limb with 3D-printed supports that look like a brace, with Velcro straps that help hold it in place.

Three electrodes extend from the top, to be attached to the muscles in Momo’s upper arm. Eventually a feedback loop will develop, in which her brain realizes that when she flexes a certain muscle, the hand moves in a way that she’s able to see and feel, and then it will become more natural. If she doesn’t have time to hook it up, or if it’s hot and she’s sweaty – Florida is known for its humid weather, after all – a small button on the arm can act as a muscle. Press it once, the index finger moves toward the thumb; press it again and all the fingers curl toward the palm.

The system knows the amount of force it’s exerting when it’s in contact with an item, so the hand won’t crush a cup it’s holding, for example. Momo and her mother quickly tested the concept with an arm-wrestling match, from which Andriaccio emerged unscathed.

It’s a far cry from the prosthetic devices Momo is used to: simple hooks with finger-like plastic molded around them that attach to her residual limb with a strap that goes across her back and around her left shoulder. She opens and closes that hand by shrugging one or the other shoulder. It’s really only helpful for activities like bike-riding, said her father, Mark Sutton, so she doesn’t usually wear it the rest of the time.

Having two functional hands will change her life, Sutton said, allowing her to open a door while holding a backpack or water bottle, for example. “I love the idea of opening doors – not just her bedroom or car door, but the idea that this opens doors for so many people,” added Andriaccio.

Unlike Momo’s previous devices, which all had fixed, L-shaped elbow joints, LaChappelle’s version is aligned with the true pivot of her elbow. That means she can raise both arms above her head for the first time – or let them both drop at her sides in a more natural manner. “If I’m able now, I might try to do the monkey bars and swing,” she said.

With the functional prototype in use by Momo, it’s now a matter of automating the process to provide global access, LaChappelle said.

He’s working on software to automatically convert limb scans into robotic designs that are sized correctly, with the electronics and functions all in the right places so devices can be 3D-printed anywhere. “We want to give amputees extreme technology, for free or for a fraction of the cost” of traditional prosthetics, LaChappelle said.

For now, he’s focusing on creating a scalable solution and working out the distribution model as his company has moved from his bedroom to a 3,500-square-foot facility in Durango, Colorado. But he sees a future in assistive devices in general, for both upper and lower extremities, and not just for amputees but also to help people who are paralyzed regain mobility.

“Perhaps instead of a prosthetic hand, someone could use a glove that would help their existing hand move,” LaChappelle said. “I see a lot of cross-pollination of technology for assistive devices.”

That would be good news around the world – in the U.S. alone, about 2 million people are living without one or more limbs, according to the Amputee Coalition. Some limbs are absent due to congenital differences, like Momo’s; others are lost in car accidents or from construction injuries or medical conditions such as diabetes and cardiovascular disease. Limb loss is particularly common – and challenging – in war-torn areas. The World Health Organization estimates there are more than 30 million amputees in developing countries, and only a small percentage of them have access to prosthetics.

“I really didn’t imagine that what I was creating at 14 would impact someone’s life like this,” LaChappelle said. “I’m just a young kid trying to do good with technology, so it’s really encouraging to see all of this happening. Momo is going to be the first of a lot of people.”

At lunch, after testing her new right-handed grip on a fork, Momo closed the index fingers to the thumbs of both hands and put them up to her eyes, looking through the circles at LaChappelle across the table.

“Cool,” she giggled. And then she closed the rest of the fingers and rested her chin on her new hand to reveal another favorite: “I like this ‘thinking pose’ best – it’s the move all the bosses make.”

To learn more about Easton LaChappelle and other people who inspire us, check out https://www.microsoft.com/inculture/peoplewhoinspire/