As a professor of astronomy and physics, Priyamvada Natarajan doesn’t balk at taking risks. She has modeled the upper limits of “monster” black holes and analyzed the consistency of dark matter. As a theorist, she notes, intellectual risk is par for the course.

But as a woman in science, risk-taking has another meaning, she says. Studying in a predominantly male field, Natarajan considers herself fortunate to have been surrounded by exceptional mentors throughout her career. She recognizes that her experience was an unusual one. Many of her female classmates at the Massachusetts Institute of Technology (MIT) did not receive the same level of encouragement to continue their studies and research, she notes.

At Yale, Natarajan has valued the informal mentoring offered by a network of fellow scholars from varying fields through the Women Faculty Forum (WFF). In 2011, she was appointed chair of the WFF, and is now paying back what she considers “a debt” to her fellow scholars. She recently spoke with YaleNews about her experience in the sciences, her goals for the WFF, and why mentoring matters.

What was your experience as a woman studying the sciences?

I found my academic discipline intellectually very welcoming. But when you’re a woman in science, particularly in my field of cosmology, it’s inevitable that you’ll get involved with issues women face and with understanding the culture of the field. Figuring out how to belong when you don’t naturally belong, because the field is predominantly male, is a key issue for women in science.

As an undergrad, I was a physics and mathematics major at MIT. There were only a handful of women in my major. I don’t remember any particular experience that made me feel limited or intimidated although, in hindsight, I realize my experience was probably unusual. It didn’t strike me at the time. Most of my female friends felt left out in many ways, although that is not what I encountered. Many did not continue on for a Ph.D.

As a graduate student at Cambridge in Trinity College, where there are incredible minds, people respected me from day one. And while there were even fewer women at Cambridge than at MIT, it was more nurturing there — for both men and women. I was the first woman in astrophysics to be elected to the fellowship at Trinity. I still vividly remember that moment of unadulterated joy when I found out. 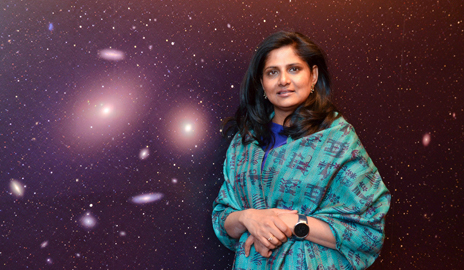 Priyamvada Natarajan, chair of the Women Faculty Forum, notes that many women leave academia before achieving tenure and believes there should be "pipeline parity," ensuring that talented individuals of both genders have the same probability of making tenure. (Photo by Michael Marsland)

How did you get involved with the WFF?

My first encounter with the WFF was the “Gender Matters” conference. I had just arrived at Yale, so I joined to help out. I distinctly remember being invited to a large organizing meeting, showing up as one of a few junior faculty members. Nancy Cott, who was part of WFF’s leadership, invited me to coffee, just to get to know me. That moment of caring about who I was, that was one of the first times at Yale someone had really reached out to me at a personal level. This was the tone of WFF leadership.

A key reason I am still here at Yale is the support and mentoring I have received from women of the WFF and my department. Being around both these groups helped me figure out and learn how to navigate the career pressure points at Yale.

What are these “career pressure points”?

The tenure process is an intellectual “coming of age,” as a scholar and teacher. It’s a journey — figuring out how to succeed, get grants, teach effectively. Figuring out our intellectual agendas is easier than dealing with issues of balancing our personal lives, or getting noticed and promoted.

For women, there’s balancing a family with work — if you want a family. We feel social pressure to have children, and be super-women, acutely in our 20’s and 30’s, coinciding with years spent climbing the academic ladder.

And then there are systemic barriers that do not exist for men; they are less overt now. But because these barriers are so subtle, they seem harder to surmount. For example, MIT released a study that showed women scientists had smaller square footage of lab space provided by the institution from the start. Uneven access to resources is one example of some of the other subtle barriers.

In my opinion, what we need to aspire to is what I call “pipeline parity.” As junior faculty, both men and women with the comparable ability should have the same probability of making tenure. A disproportionate number of women leave before receiving tenure. The challenge is how can we encourage — and not discourage — women to continue throughout the pipeline?

Of course, asymmetries start much earlier in life, so we need to look at how we nurture talent, and ensure that girls and boys are exposed to the same educational opportunities.

As the chair, what do you see as key WFF initiatives?

The WFF is coming up on 10 years of accomplishments. Key goals are visibility and empowerment of women faculty.

We have working groups focused on recommendations for institutional change on issues such as childcare. Many peer institutions hold childcare spaces for recruitment purposes. Another issue is the transparency in salary equity and creating more uniform standards, so that salary decisions do not seem arbitrary. There is a new working group for non-ladder faculty, who many times don’t have a voice.

We are hosting a major thematic conference next month, called “Parity as Practice,” to examine the implementation of parity programs — not just in academia, but across the board. We’ve assembled leading thinkers who have developed notions of parity: in law, corporate recruitment and retention, government quotas. Some countries have instituted quotas for women in government — for example, local government in India. We’ll critically examine how or if they work.

Next year, I would like to host a thematic interdisciplinary lecture series, where each professor talks about how the theme pertains to her field. The goal is to make this a high-profile event and draw undergraduates. Seeing who’s celebrated and how they’re celebrated can make a big difference for younger women and men on campus.

In the summer we’ll publish the next report on gender statistics at Yale, called “The View,” which is published every five years. The statistics are sobering.

We also have leadership workshops, with a professional trainer to help women with skills like speaking authoritatively, building self-awareness, and dealing with conflict. These are essential skills that used to be naturally transmitted in the old model of mentoring; as women, many of us do not naturally fall in the rubric, but we need to learn these skills somewhere.

Are you planning any mentoring programs?

We’ve rolled out a fantastic experiment, a junior-senior mentoring program. When you look at theories of cognitive psychology, effective mentoring is traditionally predicated on similarity; as a senior person, you are paired with someone who looks like you —an image of yourself — as the person whom you can most effectively mentor.

But now, the world has changed. We have to work harmoniously with people who don’t look or think like us, who are different. We have to learn to respect differences; there is no way around this. We need to transform our notion of effective mentoring.

We have paired 40 junior faculty members with 40 senior faculty members from different departments. By matching women outside their departments, there is no competition or conflict. Mentors can help mentees navigate the culture of the place, be nurturing and supportive, without any issue with professional conflict. The program was rolled out in January. We’ll run it for a year and evaluate it for next year.

This is done with total support from the Provost’s Office and Deputy Provost Frances Rosenbluth in particular; they’ve been great to work with. Ideally, there would be this “side-step” mentoring, along with the departmental mentoring, right from the beginning of a junior faculty member’s career at Yale — so there’s a mentor to help you navigate the climate of Yale and another in your academic department.

What kind of response have you received from Yale’s leadership?

Very truthfully, this is a particularly opportune moment for Yale because this administration is open to the idea of change. If we see ourselves as a university of importance in the world, we cannot afford not to see that the world around us has shifted dramatically. Yale seems to have gotten this and more importantly, President Levin and Provost Salovey seem to be open to transforming the University in step with the rapidly globalizing world.

My time at the helm of the WFF is a particularly fortunate moment because I see synergies. There is the first female dean of Yale College, who is an extraordinary scholar and incredible role model for many of us — and rather unselfconsciously so. For many years, I was a resident fellow at Saybrook College and have seen how Mary Miller transformed the place.

This is a great moment for Yale, when we could become leaders in diversity. I am part of a Provost’s committee on diversity, and we are thinking up some very bold moves that the administration may be amenable to. It would be incredible if Yale became a leader in diversity, with enormous intellectual and ethical integrity.

You describe risk-taking as part of your teaching style. What’s the biggest risk you’ve taken in your life?

I always wanted to be an explorer — I’m a bit of an adrenaline junkie. One of the riskiest things I’ve done was to travel to Patagonia on a solitary hike, exploring an unexplored portion of a national park for five days and four nights, without seeing a single human, but lots of scorpions, trees, and arsenic-filled lakes. This was extremely dangerous, and in retrospect, I don’t know how or why I did it. But it was one of the most wonderful things I’ve done in my life.

What is your next research frontier?

It’s all pretty exhausting, but exciting. It’s a bind trying to keep one’s research going, while leading the WFF. I just don’t sleep very much.