In the first few microseconds after the big bang, the universe was a superhot, superdense primordial soup of “quarks” and “gluons,” particles of matter and carriers of force respectively. This quark-gluon plasma cooled almost instantly but it’s brief existence set the stage for the universe we know today. To better understand how our universe evolved, scientists are re-creating a quark-gluon plasma in giant particle accelerators such as the Relativistic Heavy Ion Collider (RHIC) at Brookhaven National Laboratory (BNL), where an elaborate experiment called “STAR,” for Solenoidal Tracker at RHIC, has been collecting and analyzing data for the past decade. The STAR experiment is now poised for a major upgrade with the introduction of a new particle detector system, called the “Heavy Flavor Tracker,” that is the most advanced of its kind in the world.

Scientists and engineers at the U.S. Department of Energy (DOE)’s Lawrence Berkeley National Laboratory (Berkeley Lab), have played a major role in the development of the STAR Heavy Flavor Tracker. The STAR HFT is actually the collective name for three separate silicon-based detector systems that make it possible for the first time to directly track the decay products of hadrons comprised of flavors (types) of quarks, “charm” and “bottom,” with heavy mass. Heavy quarks are considered ideal probes for quark-gluon plasma studies; however, their low production yield and short life-span (a fraction of a microsecond) make them difficult to study in heavy ion collisions that also produce huge quantities of light flavor particles. 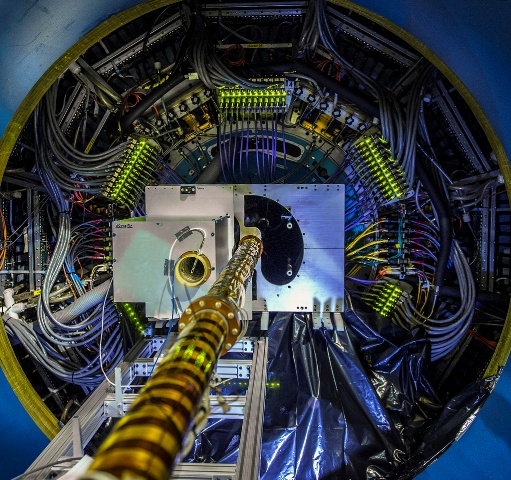 The Heavy Flavor Tracker is the newest member of the STAR detector family at the Relativistic Heavy Ion Collider (RHIC). The addition of the HFT will be a boost for studies of the quark-gluon plasma. (Photo courtesy of Brookhaven National Laboratory)

The HFT was first conceived nearly 15 years ago by Berkeley Lab’s Howard Wieman, a physicist with the Lab’s Nuclear Sciences Division who also played a prominent role in the creation of STAR. The HFT construction project, which began a few years later, was initially led at Berkeley Lab by Hans Georg Ritter, a physicist who served as head of the Nuclear Science Division’s Relativistic Nuclear Collisions program (RNC) for many years. BNL physicist Flemming Vidabaek is the contract project manager responsible for the overall fabrication of the STAR HFT.

“The HFT enables precision tracking measurements of heavy quarks at low momentum where the particle production is most sensitive to the bulk medium created in heavy ion collisions,” says Nu Xu, a physicist also with Berkeley Lab’s Nuclear Science Division who is the current spokesperson for the STAR experiment. “This allows us to distinguish the decay vertices of heavy flavor particles from primary vertices and significantly reduces combinational background, which yields cleaner measurements with a higher level of significance.”

The importance of the HFT’s precision measurements at low momentum to quark-gluon plasma studies is explained by Peter Jacobs, a Berkeley Lab physicist who now heads the Nuclear Science Division’s RNC program. 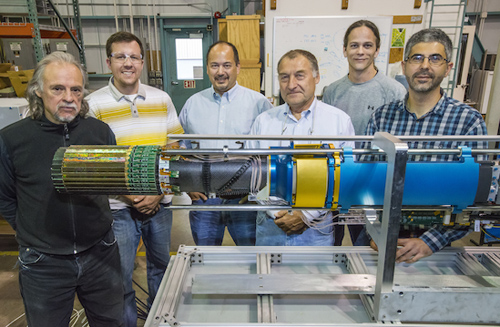 The outermost of HFT’s three detectors is a double-sided silicon strip detector (SSD) that has been refurbished to utilize new electronics for higher speed readouts. It was developed under the leadership of Jim Thomas, also a physicist in the Nuclear Science Division, and Thorsten Stezelberger of Berkeley Lab’s Engineering Division. The intermediate silicon tracker (IST) is a silicon pad detector constructed at MIT under the leadership of Gerrit van Nieuwenhuizen. The third and innermost detector, the pixel detector (PXL), is composed of Monolithic Active Pixel Sensors (MAPS), a new technology used for vertex tracking detectors.

“As far as I am aware, the PXL is the first vertex detector in the world using the MAPS technology,” says Leo Greiner, a Berkeley Lab physicist with the Nuclear Sciences Division, who oversaw this portion of the HFT project. “MAPS is particularly well-suited to vertex detectors because the signal processing is integrated with the detector silicon on the same wafer. This approach provides the high pointing resolution that is critical to getting the needed physics data.” 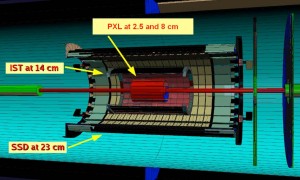 The pioneering MAPS sensors used in the HFT were developed by Marc Winter and colleagues at IPHC in Strasbourg, France. Winter’s group worked closely with the Berkeley Lab HFT group throughout the project, and were instrumental in its success.

The key to the PXL’s high pointing resolution is the thinness of its silicon MAPS, which are only 50 microns thick, about the width of a human hair. This thinness is critical for minimizing multiple Coulomb scattering and allowing high pointing resolution for low momentum particle tracks. The pixel size of the PXL is 20.7 by 20.7 microns. The PXL holds a total of 356 million pixels.

“The mechanics and cooling components of the PXL were also critical,” Greiner says. “Having 20 micron pixels is only good if your mechanics are stable enough to hold the pixels in place to that 20 micron standard. In order to get the cooling we need, we flow conditioned air over the detector surfaces at approximately 10 meters-per-second.”

The STAR HFT is now installed in the STAR detector system and is undergoing final testing.

“We’re already taking cosmic ray tracks and expect to be fully ready at RHIC startup in the next few weeks,” Greiner says. “Thanks to our unique mechanical design, we were able to install the PXL detector system into STAR in less than two days.”

Berkeley Lab scientists and engineers are now participating in the development of a new, larger version of the HFT which has been proposed for the ALICE detector at CERN’s Large Hadron Collider.

“If approved, this will be an upgrade to the Inner Tracking System of the ALICE experiment at the LHC that is a direct follow-on to the STAR HFT, utilizing a number of HFT developments,” says Jacobs. “It is proposed to be installed during the next long LHC shutdown in 2018 and will essentially be a 25 giga-pixel camera made up of 11 square meters of silicon, about 30 times larger than the HFT at STAR.”

The STAR experiment is funded by the DOE Office of Science.

For more about the STAR experiment go here