COLLEGE PARK, Md. — Roughly half the aerosols that affect air quality and climate change in North America may be coming from other continents, including Asia, Africa and Europe, according to a new study by researchers at the University of Maryland, College Park, NASA Goddard Space Flight Center, University of Maryland at Baltimore County and the Universities Space Research Association.

Atmospheric particles can travel thousands of miles downwind and impact the environment in other regions, found lead researcher Hongbin Yu of the University of Maryland, and his team in a report published in the August 3, 2012 issue of the journal Science. This could offset emission controls in North America and suggests there are more factors affecting domestic pollution than the Environmental Protection Agency has accounted for.

“People have been concerned about how an emerging Asian economy and increased manmade pollution will influence North American air quality and climate, but we found that dust makes large contributions here,” explained Yu, an associate research scientist in UMD’s Earth System Science Interdisciplinary Center (ESSIC). “So we cannot just focus on pollution. We need to consider dust.” 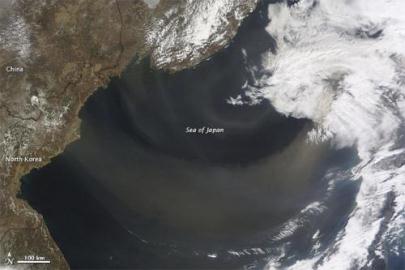 A dust plume arose over Inner Mongolia and on April 9, 2012, began its eastward journey over the Sea of Japan. New UMD-led research shows that dust accounts for most of the 64 million tons of foreign aerosol imports that arrive in the air over North America each year. Image credit: NASA Earth Observatory/Jeff Schmaltz.

The study, which provides the first satellite-measurement-based estimate of the amount of airborne particles that come to North America from overseas, shows this migrating dust usually comes in at high altitudes and in the U.S. is most likely to affect upper atmospheric conditions.

The EPA is aware that foreign pollution affects U.S. air, but it is unclear on the amount of imported aerosols, Yu said. The study revealed that much of the dust migration occurs at high altitudes and is unlikely to affect the air we breathe.

However, Yu adds: “Scientists need to acquire a better understanding of the interactions between dust and climate.”

Current satellite sensor technology allows scientists to track aerosol plumes across the ocean and measure their composition and particle characteristics. The three-dimensional satellite measurements can distinguish dust from other types of aerosols such as those released from burning biomass and fuel. While dust and combustion aerosol migration occurs year round, it is heightened in the spring due to strong seasonal wind patterns and extra-tropical cyclones.

UMD climate scientist Antonio (Tony) Busalacchi, who is chairman of the Joint Scientific Committee for the World Climate Research Programme and chairman of the Board on Atmospheric Sciences and Climate of the U.S. National Academy of Sciences/National Research Council, says one of the most interesting points Yu and his coauthors make in their study is that even a reduction of industrial emissions by the emerging economies of Asia could be overwhelmed by an increase in dust emissions due to changes in meteorological conditions and potential desertification.

“Over the course of time climate, human influence on the environment, and dust emissions have been inextricably linked,” notes ESSIC Director Busalacchi, who was not involved in the study. “One need only look at the Dust Bowl of the 1930’s to see this. With ever expanding drought conditions due to climate change, we can expect trans-boundary transport of dust aerosols to increase in the future”