With more than 20,000 abandoned and active gas and oil wells in the Gulf of Mexico, oil leaks and spills pose a continuous threat to the region’s ecosystem. Monitoring the health of the ecosystems helps ensure the sustainability of natural resources, and helps protect human health and the environment.

Researchers at the Georgia Tech Research Institute (GTRI) are developing an advanced-warning system to detect the presence of oil in saltwater. The sensor-based system offers the potential for remotely, autonomously and continuously monitoring bodies of water for oil.

“Traditional testing for chemical compounds in oil or water samples typically requires samples to be collected by on-site personnel and returned to a laboratory for analysis, but our sensor offers the potential to obtain direct, real-time measurements remotely, which could accelerate response times and reduce cleanup costs and damage to the environment,” said GTRI senior research scientist John Devitt. 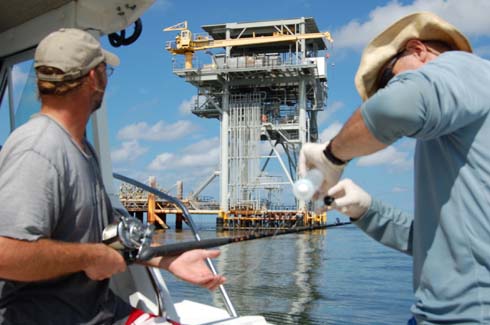 Devitt, GTRI senior research scientists Kevin Caravati and Ray Doyle, and graduate research assistant Joel Keelor have tested the device on oil and water samples they collected from waters off the Mississippi and Louisiana coasts last September after the explosion of the Deepwater Horizon rig. Initial results indicate that the sensor is able to detect oil constituents and breakdown products from the samples.

“This sensor could be used to actively monitor large areas of coastal waters for environmental risks on a long-term basis and be part of a quick alert system by enabling first responders to detect and characterize potential concerns from natural releases, leaks or spills and localize the threats before significant damage occurs,” said Devitt. 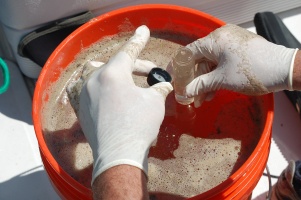 A GTRI research scientist collects a surface seawater sample off the Gulf Coast of Louisiana in Sept. 2010. Image credit: GTRI

The surface of the sensor is coated with polymer films, which are tailored to capture specific chemical compounds, such as the aromatic hydrocarbons present in oil.

The sensor utilizes the interference of light waves, a concept called interferometry, to precisely determine how much, if any, oil is present in a water sample. Light from a laser diode is coupled into an optical waveguide through a grating and travels under two channels that make up the interferometer. One channel interacts with the sensing film and the other serves as a reference.

The reference channel minimizes the response of any non-specific interactions, such as temperature and mechanical motion. By using appropriate combinations of polymers, the researchers can selectively detect oil compounds in a mixture of chemicals that may be present in a water sample. 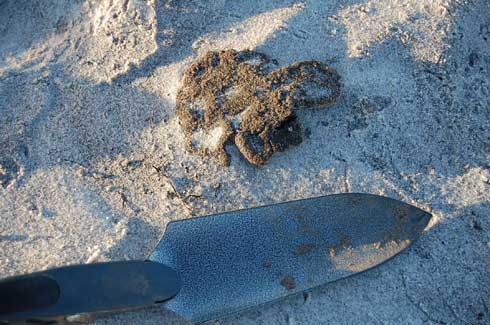 A tar deposit found in Sept. 2010 on Horn Island, which is located off the Gulf Coast of Mississippi. Image credit: GTRI

At the end of the waveguide, the light beams from the sensing and reference channels are combined to create an interference pattern. The pattern of alternating dark and light vertical stripes, or fringes, is imaged on a simple CCD detector. By doing a mathematical Fourier transform, the researchers determine the degree to which the fringe patterns are in or out of step with each other, known as phase shift. This phase shift indicates the amount of oil captured on the film.

In operation, when oil or its breakdown compounds are detected, the digital signal could be wirelessly transmitted to officials on land and the resulting alarm would alert them to the type of toxicity and location of the incident — facilitating an immediate and appropriate response. The system’s design makes it easy to integrate into a low-cost, low-maintenance, scalable package that can run on battery or solar power and be tailored to monitor unique chemical situations.

With funding support from GTRI’s Independent Research and Development program, the research team will continue to improve the sensor’s coating chemistry and hopes to deploy the sensor for further testing in the Gulf of Mexico sometime this year.