It has become an almost essential element of academic life, from college lecture halls to elementary classrooms: the group assignment.

Dreaded by some, loved by others, group projects typically aim to build teamwork and accountability while students learn about a topic. But depending on the assignment and the structure of the groups, a project can turn out to be a source of great frustration — for instructor and students alike — or the highlight of the school year. 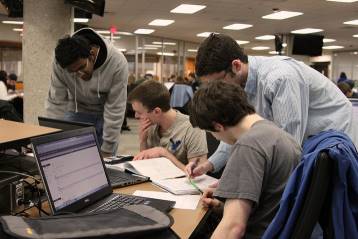 Now a University of Washington-led study of college students has found that the social dynamics of a group, such as whether one person dominates the conversation or whether students work with a friend, affect academic performance. Put simply, the more comfortable students are, the better they do, which yields benefits beyond the classroom.

“They learn more,” explained Elli Theobald, a postdoctoral researcher in the Department of Biology and the lead author on the study, published July 20 in PLOS ONE. “Employers are rating group work as the most important attribute in new recruits and new hires. If students are able to demonstrate that they have worked successfully in groups, it would seem that they should be more likely to land the job.”

Theobald is part of the UW’s Biology Education Research Group lab, formed by several faculty members in the Department of Biology about a decade ago to research how to most effectively teach biology to undergraduates.

A separate study by the BERG lab on group work, published in the July issue of Active Learning in Higher Education, finds that college students, when given a choice of whom to sit and work with in a large classroom setting, gravitate toward those who appear most like them — whether by gender, race and ethnicity, or academic skills.

Over the years, research spanning K-12 through post-secondary education has pointed to the value of group work in fostering collaborative skills and in cementing learning through interaction. In the sciences, labs are a common, though not the only, form of group work, Theobald said. As with many disciplines, STEM fields lend themselves to readings, worksheets and other activities that can be completed by multiple people working together.

For this study, researchers compared survey responses and test scores stemming from two different project styles — single-group and “jigsaw” — with three assignments each during two sections of an introductory biology class at the UW. Each of the 770 students enrolled in one of the two sections of the course experienced each project style at least once. In a single-group activity, student groups completed a worksheet together, relying on their notes and textbooks. In a jigsaw, student groups were assigned specific sections of the worksheet; students then were shuffled to new groups in which each person in the group had completed a different section of the worksheet and could teach their new groupmates what they had learned. Students took an eight-question test after each assignment.

The nearly 770 students who completed all the assignments, tests and surveys had formed two- and three-person groups with those who sat near them in class. (Jigsaw assignments later shuffled initial groups.) Two-thirds of participants were female; people of color, including students who identify as Asian, Under-Represented Minority, and International, made up more than half of respondents.

While the gender and racial and ethnic makeup of the participants informed the study, Theobald said, researchers don’t have details on who worked with whom so as to extrapolate from the composition of groups. For instance, were the experiences of women who worked with men different from those of women who worked in all-female groups? If a group contained only one person of color, what was that person’s experience compared to the rest of the group? That kind of information is ripe for further research, Theobald said.

However, one noticeable data point emerged: International and Asian American students were six times as likely to report a dominator than white American students. “Not all students experience group work the same way,” researchers wrote in the study. “If one student dominates a conversation, it can be particularly jarring to students from cultural backgrounds that place more emphasis on introspection and thinking on one’s own as opposed to a direct relationship between talking as a way to work through ideas.”

Though the data was collected from college students, the findings translate to other settings, Theobald said. She pointed to a study Google conducted to determine what made groups successful — establishing group routines and expectations (“norms”) and adding a brief window at the beginning of work time for casual talk. Such findings, along with those of the UW study, can inform employers as well as K-12 teachers about productive group work, she said.

The younger the students, the more structure a teacher is likely to have to establish, Theobald added. But when teachers make an assignment sufficiently interesting and complex, and manage student behavior, there is a potential for students to work together happily and productively.

“If we can get our groups to be more comfortable, students should learn better and work better,” Theobald said.

Co-authors on the paper were Alison Crowe, principal lecturer in biology, and Benjamin Wiggins, faculty coordinator for biology instruction, both at the UW; Sarah Eddy of Florida International University; and Daniel Grunspan of Arizona State University.