The contribution of Greenland to global sea level change and the mapping of previously unknown basins and mountains beneath the Antarctic Ice Sheet are highlighted in a new film released by Cambridge University this morning.

The work of glaciologist Professor Julian Dowdeswell, Director of Cambridge University’s Scott Polar Research Institute, is the focus of This Icy World, the latest film in the University’s Cambridge Ideas series.

A frequent visitor to both the Arctic and Antarctic, Dowdeswell’s research has found that the glaciers around Greenland are the fastest flowing in the world. 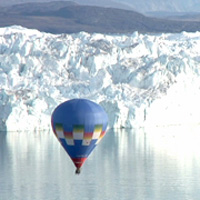 He said: “There is evidence that some parts of the ice sheet have doubled in speed up to 10 km per year in the last decade. That means the contribution of Greenland to global sea level change is increasing.”

“The numbers of icebergs released into the seas around Greenland is also increasing. We need to know just how fast these changes are taking place.

“Things are changing very rapidly here because the Arctic is the most sensitive part of the global climate system. Over the coming century, temperatures are likely to rise at double the global average here.”

Professor Dowdeswell, who has spent a total of more than three years in the polar regions, also reveals that his work in Antarctica as part of an team of international scientists, using radar systems pioneered in Cambridge, has mapped sub-glacial mountains hidden beneath the ice sheet that scientists were not aware of before.

The Scott Polar Research Institute, a research centre within Cambridge University, has about 40 scientists and post-graduate students working on various aspects of polar research. Professor Dowdeswell’s next polar trip, funded by a large grant from the UK’s Natural Environment Research Council, will be in March and April to the Greenland Ice Sheet.

Airborne radar systems will be used to measure ice thickness and the presence of lubricating water at the ice-sheet bed. This should yield key information relating to the recent speed-up of the ice.

He said: The ice in Antarctica is an average of 2-3 km in thickness, with the deepest ice almost 5 km thick. It’s changes in the volume of the ice sheet that will affect global sea level.

“Glacier and ice-sheet change is a reality at both poles. The ice is thinning and retreating and that means water is flowing back into the global ocean. Today, sea level is rising 3mm per year; over the coming century, sea level is likely to rise by up to about 1m and it’s actually that rise – with the worst storm waves you can imagine – that could cause real damage.

“In those circumstances, sea defences can be breached and low lying areas of the world can be flooded. That has serious implications for humankind.”