Even underground nuclear tests leave their mark on the part of the upper atmosphere known as the ionosphere, the researchers discovered, when they examined GPS data recorded the same day as a North Korean nuclear test in 2009. Within minutes on that day, GPS stations in nearby countries registered a change in ionospheric electron density, as a bubble of disturbed particles spread out from the test site and across the planet.

“Its as if the shockwave from the underground explosion caused the earth to ‘punch up’ into the atmosphere, creating another shockwave that pushed the air away from ground zero,” said Ralph von Frese, professor of earth sciences at Ohio State University and senior author on the study.

Jihye Park, a doctoral student in geodetic science at the university, is presenting the results of the study in a poster session at the CTBTO meeting in Vienna, Austria. 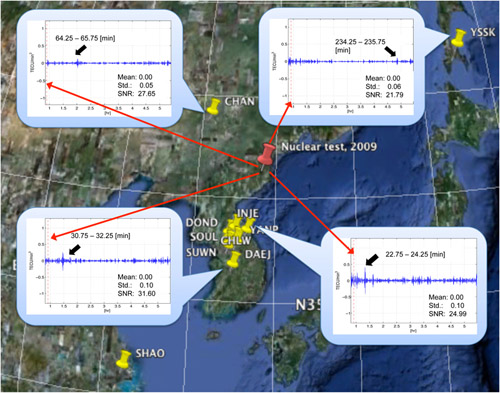 Researchers at Ohio State University and their colleagues have determined that GPS can detect clandestine nuclear tests. This close-up of a Google map of Eastern Asia shows the site of GPS receivers (yellow pins), and the probable site for North Korea’s underground nuclear test in May 2009 (red pin). Graphs (in insets) show how the explosion affected electron density high in the earth’s atmosphere, marked by spikes (black arrows) in the GPS signals received in a sampling of the 11 locations used in the study. Also listed is the number of minutes from the time of the nuclear test for the signal to reach the GPS receivers. Image by Jihye Park, courtesy of Ohio State University.

International authorities already possess several methods for detecting illegal nuclear tests, Park said. Seismic detectors pick up shockwaves through land, and acoustic sensors monitor for shockwaves through water and the air for tests that happen above ground.  Chemical sensors detect airborne radioactive gas and dust as definitive evidence of a nuclear explosion.  However, these particles may be lacking if the explosion is contained deeply below ground.

“GPS is a complement to these other methods, and can help confirm that a nuclear test has taken place – especially when the test was underground, so that its effect in the air is very subtle, and otherwise nearly impossible to detect,” she said.

While GPS was designed for location purposes, the technology has always been especially sensitive to atmospheric disturbances, said Dorota Grejner-Brzezinska, a professor of geodetic science at Ohio State and Park’s advisor.

“GPS signals must pass from transmitters on satellites high above the planet down to ground-based receivers,” Grejner-Brzezinska explained. “Air molecules – more specifically, the electrons and other charged particles in the ionosphere – interfere with the signal, generating position error. Part of our research concerns how to compensate for that vulnerability and make GPS work better. Jihye found a way to take that vulnerability and turn it into something useful.” 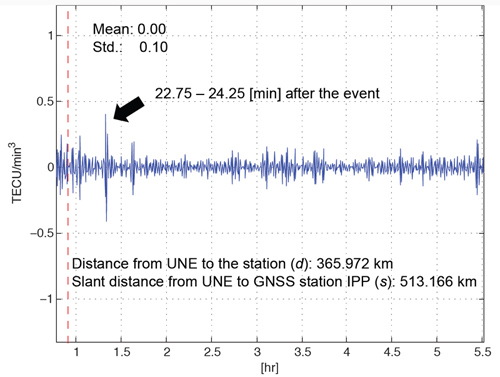 Researchers at Ohio State University and their colleagues have determined that GPS can detect clandestine nuclear tests. This graph shows a spike (marked with black arrow) in the GPS signal received by a station in in Inje County, in Gangwon Province, South Korea, minutes after the North Korean underground nuclear test (here abbreviated “UNE” for “underground nuclear explosion”) in May 2009. Graph by Jihye Park, courtesy of Ohio State University.

Park wrote computer algorithms that search GPS signals for patterns indicating a sudden fluctuation in atmospheric electron density in specific locations, which is what happens when a shockwave pushes a bubble of air through the atmosphere. As the GPS signal passes through the edge of the bubble, the change in electron density disturbs the signal in a noticeable way.

Park was able to utilize data collected from GPS receivers that the International GNSS Service (IGS) has planted around the globe for research purposes. Five of the IGS receivers scattered in Eastern Asia provided data for this study, as did six receivers belonging to the South Korean GPS network. 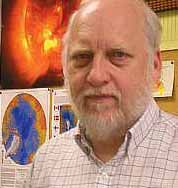 When Park analyzed the data from the 11 GPS stations, she detected a sudden spike in atmospheric electron density after the May 25, 2009 underground test, which is believed to have happened just before 1:00 a.m. Coordinated Universal Time that day.

Within 25 minutes, the shockwave had traveled 225 miles to the nearest GPS station in the study, which was located in Inje County, in Gangwon Province, South Korea. That means that it was traveling through the air at 9 miles per minute, or 540 miles per hour. Within that first hour, it had reached all 11 stations.

Based on the timing of the shockwave, the researchers traced the origin of the explosion back to P’unggye, in Hamyong Province, North Korea. This finding agrees with seismic data from the event, which was collected by the CTBTO and the US Geological Survey.

The researchers will continue this work as Park earns her PhD, and they are seeking funding and partnerships to expand it further. In the meantime, they have submitted a paper on the discovery to the journal Geophysical Research Letters.

Collaborators on the study include Yu Morton, professor of electrical and computer engineering at Miami University in Oxford, Ohio, and Luis Gaya-Pique of CTBTO’s On-Site Inspection Division.