REDMOND, Wash. — Sept. 22, 2010 — Much has been said about Internet Explorer 9 since last week’s beta launch, but the most colorful descriptions likely come from an unlikely source: a cartoon bass player touting IE9 as a “wizard’s portal” and “pirate’s dream.”

The unique endorsement is compliments of Murdoc Faust Niccals, self-proclaimed leader of Gorillaz, “the world’s greatest animated band.” In reality, Gorillaz is a musical project created by comic book artist Jamie Hewlett and Blur front man Damon Albarn. The experimental rock band, which has sold millions of records worldwide, is showcasing what IE9 can do through a content-rich, HTML5 version of its website optimized for the new browser. The band also put together a quirky launch video featuring its bass player, who takes visitors on a tour of the new Gorillaz site. To see the video, click through to Murdoc’s Club Room. 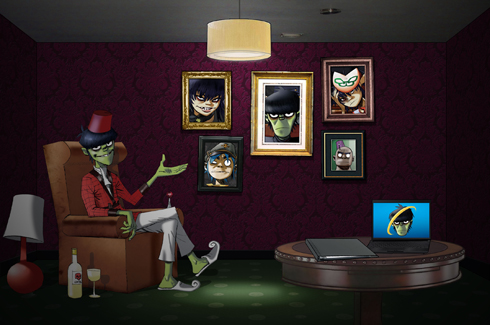 About the image: For the U.K. launch of Internet Explorer 9, the Gorillaz screened a seven-minute video with fictional bass player Murdoc presenting new features in the browser. Image credit: Microsoft

The partnership between Gorillaz and Microsoft was a natural one, says Leila Martine, director of the Windows Consumer Business Group in the United Kingdom.

“What we wanted to do was work with a leading-edge artist that used the Web as a critical part of their medium to showcase the possibilities that could be created with IE9,” Martine says. “Once the Gorillaz had seen the IE9 demo and began working with us, they were able to start bringing their incredible creative talents and apply that to bring this experience to life for them.”

The Gorillaz’ design team, Zombie Flesh Eaters, took advantage of HTML5 and IE9’s hardware acceleration capability to create a new online experience for the band’s fans. Powered by HTML5, Murdoc’s Club Room has been transformed into an interactive space. The cheeky rocker guides visitors through the site, which is packed with pictures, graphics, and high-definition video and audio. 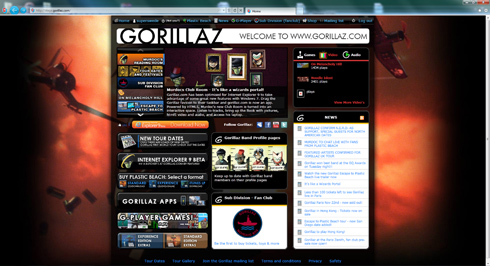 About the image: The Gorillaz animated rock band is showcasing what IE9 can do through a content-rich, HTML5 version of its website packed with pictures, graphics, and high-definition video and audio. Image credit: Microsoft

The site also takes advantage of IE9’s integration with Windows. Visitors can now drag the Gorillaz icon to their taskbar and access the website like an application. Right-clicking on the Gorillaz icon brings up Jump Lists that provide access to site features like music, videos and games.

In a made-up press release, Murdoc elaborated on the benefits of IE9. “It’s like a tube full of magic bursting out of the screen,” he said. “It’s like shoving your mind through a black hole and right slap-bang into the future. I can have two or three video screens running all at the same time, and create jumping lists that get me where I need to go instantly. INSTANTLY! And, our mouse works so fast now we skidded off the page twice today.” 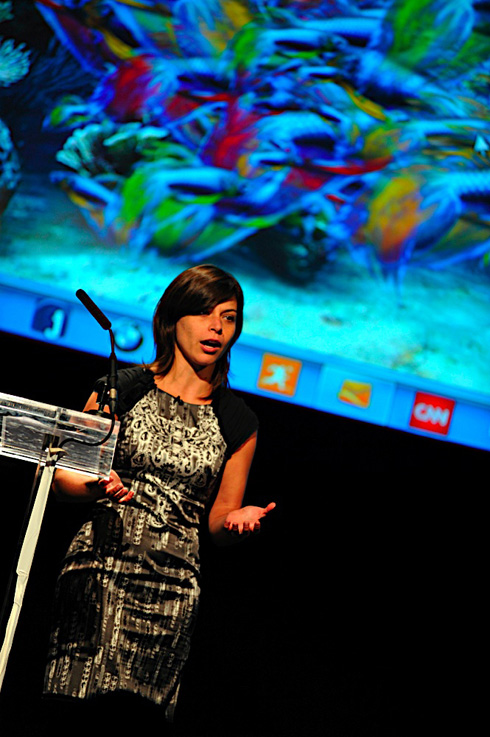 About the image: Leila Martine, director of the Windows Business Group in the U.K., at the IE9 launch party in London. Image credit: Microsoft

The offbeat humor is aimed at changing people’s perception of Internet Explorer in the U.K. and wherever else people follow the band, says Angie Moxham, founder of 3 Monkeys Communications. 3 Monkeys is Microsoft’s U.K. consumer and online PR agency, which came up with the idea of the site. “It just seemed like a natural partnership,” she says. “IE9 is such a visual browser, and the Gorillaz pride themselves on being extremely innovative when it comes to the use of technology and promoting their music to their fans.”

Moxham says the Gorillaz were enthusiastic partners, and that the only challenge was the time crunch; the Gorillaz signed on just six weeks before the beta launch. Gorillaz creators Hewlett and Albarn attended the U.K. launch in London, where the exclusive seven-minute video was shown. The video features Murdoc discussing the browser with geeky cartoon character “Mike O’Soft” and calling out features like smooth video – “not like those old VHSs,” he says.

Martine says that the immersive experience at the Gorillaz site represents how Microsoft wants to push the Web forward with its new browser. “In the last 15 years, there hasn’t been the quantum improvement in websites that other technologies like chip processors and GPUs [graphical processing units] have seen,” she says. “With our launch partners like Gorillaz, we want to showcase what the world’s best designers and developers can do with IE9 to create rich new experiences and make that quantum shift.”