The epic film Gone with the Wind marks its 75th anniversary this year. Scarlett O’Hara, the ultimate southern belle and heroine, forms the basis of a re-released book Scarlett’s Women:Gone with the Wind and its Female Fans which explores the film and why it appeals to a wide female fan base.

A free talk will be given by the book’s author, Professor Helen Taylor, on Thursday 12 June at 6pm in the University of Exeter’s Bill Douglas Cinema Museum. There will also be a screening of the film on Saturday 14 June. 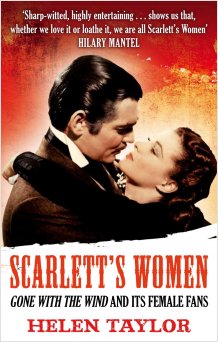 This public event will offer the opportunity to share diverse memories about Gone with the Wind. According to Professor Taylor’s research, the response of women readers or film goers to Gone with the Wind showed that for many, especially older women who remember the book being published (1936) and the film opening (1939), it was a series of firsts: the longest book they’d ever read, the grandest most lavish Technicolor Hollywood film ever seen. It was also one of the first books and films featuring a multi-dimensional female protagonist rather than a bit of love interest for a complex hero. For that generation, now largely passed away, Scarlett was a wicked and dangerous figure and her unrequited love for wimpish Ashley Wilkes was a grave error after she’d finally conquered the devastating Rhett Butler. Younger women shared that verdict on male characters, but for them Scarlett O’Hara was mesmerising.

The 21st century world looks very different from that of 1939 when Gone with the Wind was produced. Professor Taylor commented:“Should we celebrate or even watch the legendary movie in the year Twelve Years a Slave won its Oscars? In recent years, writers and film-makers have amply rebutted Gone with the Wind’s reactionary perspective on southern history, slavery and race. Great epic film as it is, its silence about the horrors of the slave system speaks volumes, and it’s good that we now condemn its politics.”

She added:“But it’s also important that we understand how and why Gone with the Wind influenced and shaped popular views of slavery and race for much of the last 75 years, and why book and film have been so popular, especially with women readers and audiences.”

The talk will explore how – more than any other heroines – Scarlett encapsulates archetypal and recognisable female experience, enduring physical and emotional deprivations, bereavements and rejections. She is a deviant daughter, flawed three times wide, negligent mother, careless friend and courageous defender of hearth and home.  All this occurs against a sweep of major historical crisis and change focusing on the sufferings of white elite American Southerners during and after the Civil War.

The part of Scarlett O’Hara is played by the magnificent Vivien Leigh, who had family connections with Devon and is commemorated at Topsham Museum and in the Bill Douglas Cinema Museum. Dr Lisa Stead, a lecturer in English and Film at the University of Exeter will complement Professor Taylor’s talk with reflections on the actress’s career and most famous role.

Professor Taylor said:“I didn’t imagine Gone with the Wind would remain a globally celebrated and iconic book and film as the multicultural 21st century developed. But of course great stories, especially with fabulous well-rounded and quirky heroines, are always popular – especially with women readers and cinemagoers. This compelling epic narrative, following American history through the trials, tribulations and successes of one feisty woman, has remained a firm favourite.”

The free talk is part of the Universities Week of events and is on Thursday 12 June from 6pm – 8pm in the University of Exeter’s Bill Douglas Cinema Museum, Old Library Prince of Wales Road. The film (£5.00 on the door) will be shown at the University, on Saturday 14 June at 2pm, in Devonshire House.