Washington, DC—For the first time, researchers have been able to map the true extent of gold mining in the biologically diverse region of Madre De Dios in the Peruvian Amazon. The team combined field surveys with airborne mapping and high-resolution satellite monitoring to show that the geographic extent of mining has increased 400% from 1999 to 2012 and that the average annual rate of forest loss has tripled since the Great Recession of 2008. Until this study, thousands of small, clandestine mines that have boomed since the economic crisis have gone unmonitored. The research is published in the online early edition of the Proceedings of the National Academy of Sciences the week of October 28, 2013.

The team, led by Carnegie’s Greg Asner in close collaboration with officials from the Peruvian Ministry of Environment, used the Carnegie Landsat Analysis System-lite (CLASlite) to detect and map both large and small mining operations. CLASlite differs from other satellite mapping methods. It uses algorithms to detect changes to the forest in areas as small as 10 square meters, about 100 square feet, allowing scientists to find small-scale disturbances that cannot be detected by traditional satellite methods. 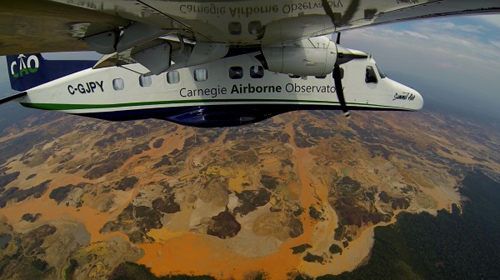 The team corroborated the satellite results with on-ground field surveys and Carnegie Airborne Observatory (CAO) data. The CAO uses Light Detection and Ranging (LiDAR), a technology that sweeps laser light across the vegetation canopy to image it in 3-D. It can determine the location of single standing trees at 3.5 feet (1.1 meter) resolution. This level of detail was used to assess how well CLASlite determined forest conditions in the mining areas. The CAO data were also used to evaluate the accuracy of the CLASlite maps along the edges of large mines, as well as the inaccessible small mines that are set back from roads and rivers to avoid detection. The field and CAO data confirmed up to 94% of the CLASlite mine detections.

Lead author Asner commented: “Our results reveal far more rainforest damage than previously reported by the government, NGOs, or other researchers. In all, we found that the rate of forest loss from gold mining accelerated from 5,350 acres (2,166 hectares) per year before 2008 to15,180 acres (6,145 hectares) each year after the 2008 global financial crisis that rocketed gold prices.”

In addition to wreaking direct havoc on tropical forests, gold mining releases sediment into rivers, with severe effects on aquatic life. Other recent work has shown that Perú’s gold mining has contributed to widespread mercury pollution affecting the entire food chain, including the food ingested by people throughout the region. Miners also hunt wild game, depleting the rainforest fauna around mining areas, and disrupting the ecological balance for centuries to come. 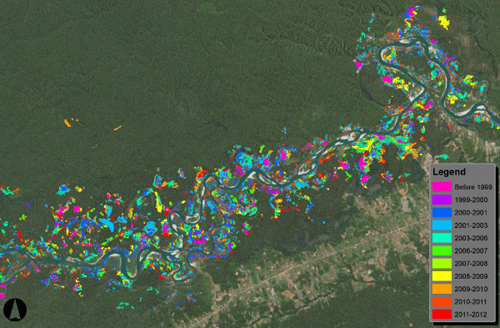 Co-author Ernesto Raez Luna, Senior Advisor to the Minister, Peruvian Ministry of the Environment, remarked: “Obtaining good information on illegal gold mining, to guide sound policy and enforcement decisions, has been particularly difficult so far. Finally, we have very detailed and accurate data that we can turn into government action. We are using this study to warn Peruvians on the terrible impact of illegal mining in one of the most important enclaves of biodiversity in the world, a place that we have vowed, as a nation, to protect for all humanity. Nobody should buy one gram of this jungle gold. The mining must be stopped.”

As of 2012, small illicit mines accounted for more than half of all mining operations in the region. Large mines of previous focus are heavy polluters but are taking on a subordinate role to thousands of small mines in degrading the tropical forest throughout the region. This trend highlights the importance of using this newer, high-resolution monitoring system for keeping tabs on this growing cause of forest loss.

Asner emphasized: “The gold rush in Madre de Dios, Perú, exceeds the combined effects of all other causes of forest loss in the region, including from logging, ranching and agriculture. This is really important because we’re talking about a global biodiversity hotspot. The region’s incredible flora and fauna is being lost to gold fever. ”