The giant ice island that broke off Greenland’s Petermann Glacier in July 2012 has plowed into the ocean floor and shattered into a couple of mammoth “ice cubes” sitting in the ocean, according to the University of Delaware researcher who reported the initial glacial event last year.

Andreas Muenchow, an associate professor in UD’s College of Earth, Ocean, and Environment, said the ice chunk twice the size of Manhattan that snapped off the glacier in July 2012 ground into the ocean floor and has split into at least two ice islands and a number of large icebergs.

“It does not take much speed for a heavy truck running into your parked car to demolish it. Something’s gotta give, your car, or in this case, the ice island shattering into pieces,” Muenchow wrote in his Icy Seas blog. 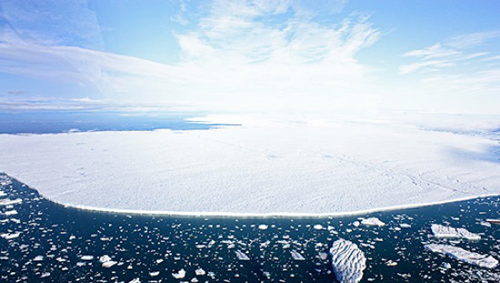 In an interview, Muenchow said some of his fellow scientists and ice hobbyists were speculating about what caused the big ice island to break apart in the frigid Arctic waters. Muenchow had the “inside scoop,” having recently completed a scientific paper with collaborators from Oregon State University and Scripps Institution of Oceanography on the thickness of the floating ice of Petermann Glacier and how it has changed over the past decade.

Using laser data to track the surface of the original ice island above the water line, and radar data to image the submerged portion below, Muenchow said the bottom of the original ice island extended over two football fields (600 feet, or 200 meters) beneath the ocean’s surface. Over the 10-day period prior to its breakage on Sept. 10, the giant island, “a very thick ice cube,” traveled a distance of 62 miles and then got stuck at the bottom for a few days.

Muenchow said the ice island had a central channel running across its surface, and that’s where it fractured cleanly into two new pieces of almost equal size. He said this channel is a unique feature of the floating glaciers around both northern Greenland and Antarctica.

“Things like this happen all the time in the Arctic,” Muenchow said, noting that a corps of faithful professional and amateur trackers scours imagery from MODIS, an instrument aboard NASA’s Terra and Aqua satellites, to follow the ice breaks.

“Tracking this ice island’s whereabouts has been great public outreach for me, to interest people in science and research,” Muenchow said. “But for my friends in the Canadian Ice Service, this is serious business, important for protecting people and interests downstream, on boats and oil platforms.” 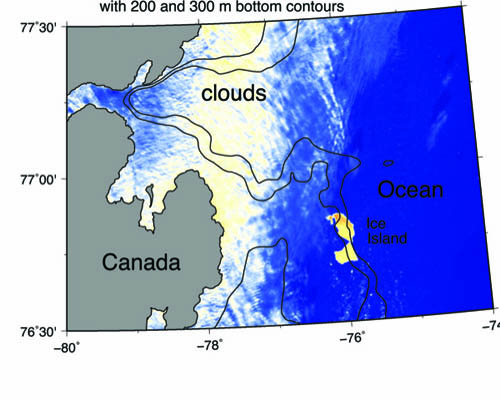 The two large ‘ice cubes’ appear in yellow at right in this figure, which is overlaid with contours of 200-meter and 300-meter bottom depth. Image courtesy Andreas Muenchow, University of Delaware