Opening prescription medicine bottles can be a struggle for individuals with arthritis. When the medicine inside the bottle is supposed to relieve the pain, but opening the bottle causes additional pain, the experience can be even more frustrating.

Pfizer Inc. confronted these concerns head-on by working with researchers at the Georgia Tech Research Institute (GTRI) to develop an easy-to-open and child-resistant container and cap to dispense one of its rheumatoid arthritis medicines. The square bottle with round, blue closure recently received the ease-of-use commendation from the U.S. Arthritis Foundation.

“A lot of people believe that if a medicine bottle is child resistant, that means it is going to be hard for people with arthritis to open,” said Brad Fain, a GTRI principal research scientist. “With this project, we’ve been able to debunk that notion and demonstrate that we can find a balance between ease of use and child resistance through quality design work.” 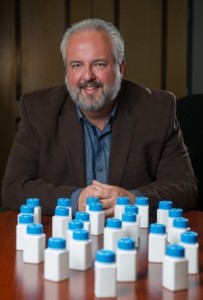 GTRI has a history of helping companies evaluate and improve the design of consumer products and currently serves as the independent product testing organization for the U.S. Arthritis Foundation, the Arthritis Society of Canada and Arthritis Australia. For this work, GTRI recruits users to test a variety of consumer products – medicine bottles, beverage containers, office supplies, medical devices, vehicles and cell phones – in its Accessibility Evaluation Facility.

If a product passes GTRI’s rigorous ease-of-use testing, the company that created the product can use the arthritis organization’s logo in its advertisements and on its packaging. Pfizer previously received the U.S. Arthritis Foundation’s ease-of-use commendation for the easy-open cap used on its 120-count bottles of Advil® tablets, caplets and gel caplets.

Pfizer began working with GTRI in early 2011 to develop a container and closure system that was easy to open, child resistant and able to be manufactured on a high-speed production line. Pfizer asked Fain and his team to suggest design features and materials for the bottle and closure system that would make it easier to open than a typical child-resistant prescription bottle.

“We helped Pfizer understand the consumer aspects of the medicine bottle and closure design and what would work and not work from the perspective of a user with arthritis,” said Fain.

When GTRI researchers began proposing bottle and cap possibilities to the company, the cap’s material and the shape of the bottle were important elements to consider, according to Fain. The team suggested coating the cap with a rubber-like thermoplastic elastomer to increase the friction between the cap and hand holding it, and make it easier to grasp and rotate. They also recommended selecting a non-cylindrical container that would be easier to grasp.

“A bottle with flat sides is less likely to rotate in the user’s hand when it’s being grasped, so the user doesn’t need to apply as much force to stabilize the bottle in the hand while turning the cap,” explained Fain.

“We collected this data because both of these actions – pushing down on and twisting the cap – play significant roles in how easy it is for someone with arthritis to be able to open a medicine bottle without experiencing significant pain,” said Fain.

Pfizer ultimately selected a square container and round thermoplastic elastomer cap that would meet the force constraints, but still be child resistant. And the data GTRI researchers collected was used as evidence of compliance with the U.S. Arthritis Foundation requirements when Pfizer applied for the ease-of-use commendation.

“This project demonstrates that Georgia Tech can work with industry, plug directly into a company’s commercialization process and quickly provide the necessary data so that the company can launch a product on-time,” added Fain.