Even as a little kid, Chelsea Halley knew that she wanted to be a geologist. Now, as the 2012 University of Delaware graduate gets set to receive her master’s degree in geology from the University of Texas, the goal she set when she was younger is becoming a reality as she embarks on a career as a geologist for an environmental consulting company in Austin.

“This sounds so nerdy but really, since I was young I wanted to be a geologist. I was always very into science,” said Halley.

Halley will start her new job in June, and her path began at UD where she majored in natural resource management (NRM) in the College of Agriculture and Natural Resources (CANR) and was exposed to a wide range of environmental topics.

“I loved the NRM major. I think it’s a great balance. It’s interdisciplinary so I really got to take a lot of classes from multiple disciplines,” said Halley. “In the major, you had to take a wildlife class and you had to take a biology class but you had choices under those headings. So I got to choose, did I want to take a wildlife conservation class? Did I want to take a bird class? An entomology class? I felt like you had enough leeway to where you really got to cater the degree to your interests, which was great.” 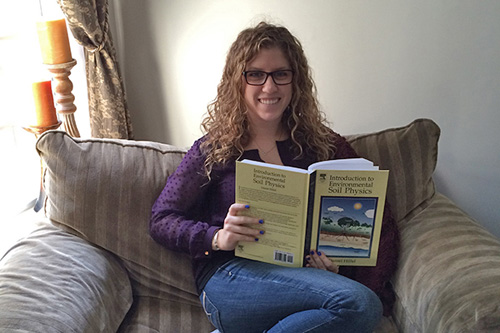 CANR alumna Chelsea Halley is working toward a master’s degree at the University of Texas and will join an environmental consulting firm in Austin as she fulfills a childhood dream to become a geologist. Image credit: University of Delaware

After graduating from UD, Halley landed a job with the Delaware Department of Natural Resources and Environmental Control (DNREC), where she worked for the Site Investigation and Restoration Section as an environmental scientist doing remediation of contaminated soil and groundwater.

“I was basically taking soil samples, groundwater samples, seeing if it’s contaminated, and then making the plan of if it needs to be cleaned up, why it needs to be cleaned up. These were inactive sites, like an old gas station that had closed down or a site that previously had a dry cleaner,” said Halley. “We would clean up those inactive sites and turn them into useful land. So we would clean up a contaminated gas station to acceptable safe levels and then maybe someone would buy it and turn it into something else, like a restaurant or a shopping mall.”

Halley said she loved her time at DNREC and after working there from 2012-14, she decided to go back to school to get her master’s degree.

At the University of Texas, Halley is focused on the environmental side of geology, specifically on the soil moisture deficit in the state.

“Texas is a drought state, which is so different from when I was working in Delaware where we wanted to focus on the quality of water in Delaware — and water quality is an issue everywhere — but there was never a quantity issue, like, ‘Oh where is the water coming from? Will we have enough water?’ And that’s all anyone ever talks about in Texas,” said Halley.

Researching at a field site in Fredericksburg, Texas, which is about two hours from Austin, Halley uses soil moisture probes that have been installed in the ground that constantly measure the soil moisture.

“My research is helping to calibrate those probes so that it’s a more soil-specific calibration that’s more specific to each type of soil throughout the site instead of a factory-supplied calibration which is not very accurate. So it’s a small piece of a large project that is measuring soil moisture throughout a specific network,” said Halley.

Halley said that soil moisture is important to know for many different factors such as irrigation scheduling and how to best manage water resources in general.

“It’s a small piece of the water budget as a whole but it’s really crucial and it’s the most difficult to quantify, so there’s a lot of work now, especially to quantify that soil moisture so you know how much water you have for other aspects,” said Halley.

As for her time at UD, Halley said that she really wanted to stress how much she enjoyed her time studying NRM and the benefits of taking such an interdisciplinary major.

“You take a couple of economics classes and a couple of policy classes in addition to the science classes. Science and policy are very closely connected, and I saw that when I worked at DNREC. I was a scientist but for a government agency and not only did I have to understand how to interpret the regulations but I was part of helping to write guidelines for the people using those regulations,” Halley said. “So the major allowed me to see all aspects of natural resource management meaning the business portion which would be economics, the science which were my basic chemistry and biology classes and then the policy which were the natural resource policy classes, wildlife conservation policy classes, just branching all of those disciplines made me very well rounded when I went to look for a job.”