ANN ARBOR, Mich.— Astronomers have detected a mysterious ring of carbon monoxide gas around the young star V1052 Cen, which is about 700 light years away in the southern constellation Centaurus.

The ring is part of the star’s planet-forming disk, and it’s as far from V1052 Cen as Earth is from the sun. Discovered with the European Southern Observatory’s Very Large Telescope, its edges are uniquely crisp.

Carbon monoxide is often detected near young stars, but the gas is usually spread through the planet-forming disk. What’s different about this ring is that it is shaped more like a rope than a dinner plate, said Charles Cowley, professor emeritus at the University of Michigan who led the international research effort.

“It’s exciting because this is the most constrained ring we’ve ever seen, and it requires an explanation,” Cowley said. “At present time, we just don’t understand what makes it a rope rather than a dish.”

Perhaps magnetic fields hold it in place, the researchers say. Maybe “shepherding planets” are reining it in like several of Saturn’s moons control certain planetary rings. 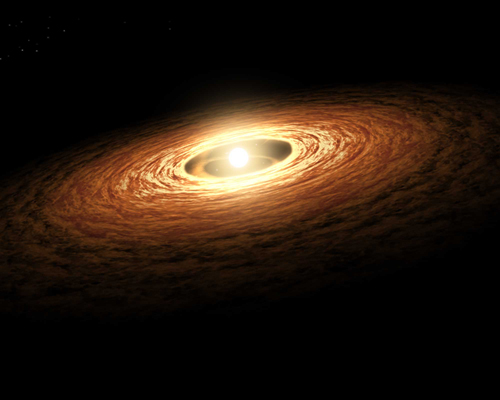 The image shows a young star encircled by its planet-forming disk of gas and dust. An international team of astronomers has just discovered a tight ring of carbon monoxide in the planet-forming disk around V1052 Cen, a star about 700 light years away in the southern constellation Centaurus. Image credit: NASA/JPL-Caltech

“What makes this star so special is its very strong magnetic field and the fact that it rotates extremely slow compared to other stars of the same type,” said Swetlana Hubrig, of the Leibniz Institute for Astrophysics Potsdam, Germany.

The star’s unique properties first caught the researchers’ attention in 2008, and they have been studying it intensely ever since.

Understanding the interaction between central stars, their magnetic fields and planet-forming disks is crucial for astronomers to reconstruct the solar system’s history. It is also important to account for the diversity of the known planetary systems beyond our own.

This new finding raises more questions than it answers about the late stages of star and solar system formation.

“Why do turbulent motions not tear the ring apart?” Cowley said. “How permanent is the structure? What forces might act to preserve it for times comparable to the stellar formation time itself?”

The team is excited to have found an ideal test case to study this type of object.

“This star is a gift of nature,” Hubrig said.

The findings are newly published online in Astronomy and Astrophysics. The paper is titled “The narrow, inner CO ring around the magnetic Herbig Ae star HD 101412.” Authors are from the University of Michigan, the Leibniz Institute for Astrophysics Potsdam in Germany, the Istituto Nazionale die Astrofisica in Italy and the European Southern Observatory.