AUSTIN, Texas — A new study correlates a series of small earthquakes near Snyder, Texas between 2006 and 2011 with the underground injection of large volumes of gas, primarily carbon dioxide (CO2) — a finding that is relevant to the process of capturing and storing CO2 underground.

Although the study suggests that underground injection of gas triggered the Snyder earthquakes, it also points out that similar rates of injections have not triggered comparable quakes in other fields, bolstering the idea that underground gas injection does not cause significant seismic events in many geologic settings.

No injuries or severe damage were reported from the quakes identified in the study.

The study represents the first time underground gas injection has been correlated with earthquakes greater than magnitude 3. 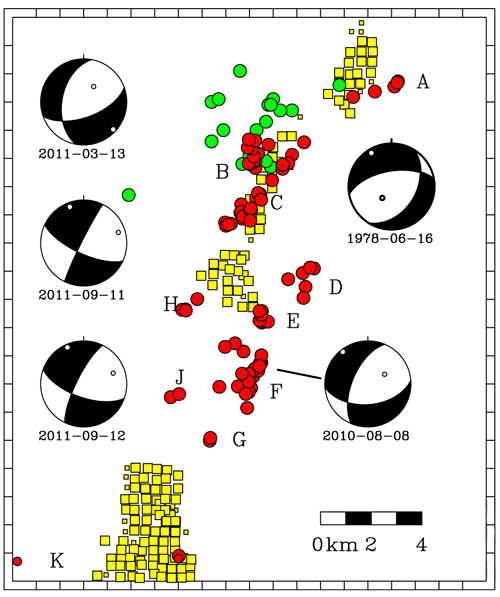 Map showing 2009–2011 earthquakes located in this study (red circles), gas injection wells active since 2004 (yellow squares), and focal mechanisms for regional events (beach balls). A series of small quakes occurred in the same region in 1979 and 1980 (green circles) and may have been related to injection of water for enhanced oil recovery. Sources: EarthScope, Texas Railroad Commission, S.T. Harding, and St. Louis University. Illustration by: Cliff Frohlich/University of Texas at Austin.

The results, from Wei Gan and Cliff Frohlich at The University of Texas at Austin’s Institute for Geophysics, appear in an online edition of the journal Proceedings of the National Academy of Sciences.

The study focused on an area of northwest Texas with three large oil and gas fields — the Cogdell field, the Salt Creek field and the Scurry Area Canyon Reef Operators Committee unit (SACROC) — which have all produced petroleum since the 1950s.

Operators began injecting CO2 in the SACROC field in 1971 to boost petroleum production, a process known as CO2 Enhanced Oil Recovery (CO2 EOR). Operators began CO2 EOR in the Cogdell field in 2001, with a significant increase starting in 2004. Because CO2 has been injected at large volumes for many years, the Department of Energy has funded research in this region to explore the potential impacts of carbon capture and storage (CCS), a proposed technique for reducing greenhouse gas emissions by capturing CO2 and injecting it deep underground for long-term storage.

This latest study was funded by the U.S. Geological Survey and the National Natural Science Foundation of China.

Using a high-resolution temporary network of seismometers, Gan and Frohlich identified 93 earthquakes in the Cogdell area from March 2009 to December 2010, three of which were greater than magnitude 3. An even larger earthquake, with magnitude 4.4, occurred in Cogdell in September 2011. Using data on injections and extractions of fluids and gases, they concluded that the earthquakes were correlated with the increase in CO2 EOR in Cogdell.

“What’s interesting is we have an example in Cogdell field, but there are other fields nearby that have experienced similar CO2 flooding without triggering earthquakes,” said Frohlich, associate director of the Institute for Geophysics, a research unit in the Jackson School of Geosciences. “So the question is: Why does it happen in one area and not others?”

In a paper published last year in the Proceedings of the National Academy of Sciences, Stanford University earthquake researchers Mark Zoback and Steven Gorelick argued “there is a high probability that earthquakes will be triggered by injection of large volumes of CO2” during CCS.

“The fact that the different fields responded differently to CO2 injection and that no other gas injection sites in the world have been linked to earthquakes with magnitudes as large as 3 suggest that despite Zoback and Gorelick’s concerns, it is possible that in many locations large-volume CO2 injection may not induce earthquakes,” said Frohlich.

Frohlich suggests one possible explanation for the different response to gas injection in the three fields might be that there are geological faults in the Cogdell area that are primed and ready to move when pressures from large volumes of gas reduce friction on these faults. The other two fields might not have such faults.

Frohlich suggests an important next step in understanding seismic risks for proposed CCS projects would be to create geological models of Cogdell and other nearby fields to better understand why they respond differently to gas injection.

Gan and Frohlich analyzed seismic data collected between March 2009 and December 2010 by the EarthScope USArray Program, a National Science Foundation-funded network of broadband seismometers deployed from the Canadian border to the Gulf of Mexico. Because of the high density of instruments, they were able to detect earthquakes down to magnitude 1.5, too weak for people to feel at the surface and many of which were not detected by the U.S. Geological Survey’s more limited seismic network.

Using the USArray data, the researchers identified and located 93 well-recorded earthquakes. Most occurred in several northeast-southwest trending linear clusters, which might indicate the presence of previously unidentified faults. Three of the quakes identified in the USArray data were greater than magnitude 3. According to U.S. Geological Survey observations for the same area from 2006 to 2011, 18 earthquakes greater than magnitude 3 occurred in the study area.

Gan and Frohlich also evaluated data on injections and extractions of oil, water and gas in the study area collected by the Texas Railroad Commission, the state agency that regulates oil and gas operations. Since 1990, rates of liquid injection and extraction, as well as gas produced, remained fairly constant in all three oil and gas fields. The only significant change was a substantial increase in injection rates of gas, primarily CO2, in the Cogdell field starting in 2004.

Previous work by Frohlich and others has shown that underground injection of liquids can induce earthquakes.

This research was partially supported by National Natural Science Foundation of China (Grant 41174076) and by the U.S. Geological Survey (Award G13AP00023).