In this week’s Science magazine, an energy expert advocates investing in “the other fuel cell” to reduce reliance on fossil fuels now, not in decades.

COLLEGE PARK, Md.– When most people hear the words “fuel cell,” they think of eco-friendly, hydrogen-powered cars that emit nothing more than water.

And that, says Professor Eric Wachsman, director of the University of Maryland Energy Research Center (UMERC), is one of the reasons we’re all not driving one.

The U.S. Department of Energy’s (DOE) recent decisions about how to fund fuel cell research, he says, are putting the country at risk of falling behind in the development and implementation of the most efficient means of converting fuel to electricity. Fuel cells have up to three times the efficiency of an internal combustion engine.

“There is a problem in the perception of the public and policy makers, and in the funding of our fuel cell programs, that hydrogen and fuel cells are linked,” says Wachsman, a faculty member at the university’s A. James Clark School of Engineering. “Hydrogen-based fuel cells are the technology that has gotten all of the press and as a result we’re still waiting for a future hydrogen infrastructure. Yes, fuel cells can run off hydrogen, but they don’t have to.”

Another problem, Wachsman says, is America’s fixation on vehicles. “It will take decades to create a nationwide hydrogen distribution and storage system, and to convert every gas station into a hydrogen filling station. That reality has turned fuel cells into a ‘future technology’ and has resulted in a drastic reduction in the funding of fuel cell research by the DOE in favor of developing electric cars, when in fact fuel cells can be used right now in many stationary and mobile applications, including centralized power distribution and power generation for homes, businesses, and industry.” 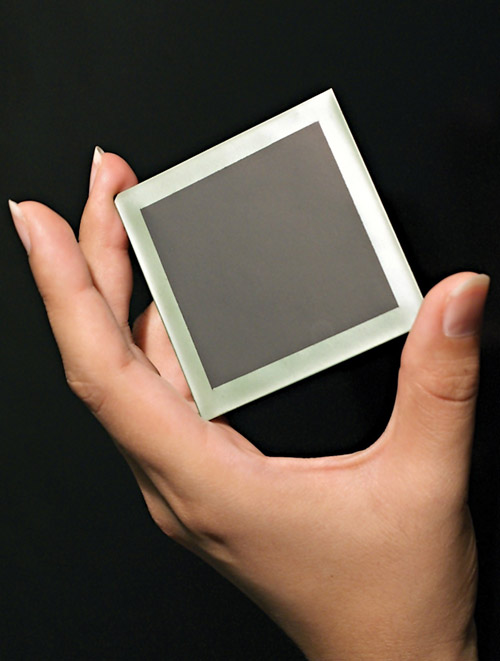 Most people are unaware that there are two kinds of fuel cells. The one in the public eye, the proton exchange membrane (PEM) fuel cell, uses hydrogen to generate power. The type of fuel cell Wachsman and his colleagues have worked to perfect, the solid oxide fuel cell (SOFC), has a distinct advantage over its PEM-based sibling.

“Solid oxide fuel cells are unique because they can oxidize any fuel,” Wachsman explains. “They can run off of gasoline, diesel and natural gas today, and biofuels and hydrogen in the future, whenever that infrastructure is in place.”

Still, nothing’s perfect, and Wachsman can sum up the reason why SOFCs aren’t in large-scale production in a word: temperature.

“That is the issue,” he explains. “It’s the reason why the automotive companies are using PEM fuel cells. PEM fuel cells operate at around 80 degrees Celsius [180 degrees Fahrenheit], which allows them to startup fairly quickly. Current solid oxide fuel cells currently operate at 800 degrees Celsius [1500 degrees Fahrenheit], so it takes a long time to warm up to operating temperature, making them more applicable to stationary power generation.”

Wachsman and his colleagues are working to change that.  In an article in the November 18 issue of Science, the team outlines the technology behind a new world record power density SOFC that generates two watts of power per square centimeter at 650 degrees Celsius [1200 degrees Fahrenheit]. The cell uses a bi-layer electrolyte developed by Wachsman that is more than 100 times more conductive than the conventional zirconia-based electrolyte operating at the same temperaturealso a world record. When the cells are assembled into a stack they should produce three kilowatts of electricity per kilogram of material, more than an internal combustion engine at approximately one-third the size.

The paper lays out a strategy to further lower temperature. The team believes its improvements to SOFC electrolytes and nanostructured-electrode designs could ultimately reduce the cells’ operating temperature to only 350 degrees Celsius [660 degrees Fahrenheit]. At that temperature they could start up fast enough for automotive applications, and would be more efficient and more affordable than current SOFCs because they could be manufactured from less expensive materials.

The DOE’s 2012 budget request, however, does not include funding for the SOFC program, effectively eliminating it from the agency’s research priorities and greatly reducing funding options for groups like Wachsman’s. This decision, he believes, was made without a complete understanding of recent significant advances in SOFC technology such as those described in the Science paper, which, combined with their fuel-flexibility, put them in an ideal position to improve nationwide energy efficiency today.

In the current issue of Energy and Environmental Science, Wachsman and his colleagues, Craig A. Marlowe and Kang Taek Lee, make the case that SOFCs should be an integral part of our energy policy. SOFCs, they argue, meet all of the DOE’s six key energy strategies: they deploy clean electricity, make use of alternative fuels, help modernize the power grid, will help gradually electrify the vehicles we drive, increase vehicle fuel efficiency, and increase building and industrial efficiency.1

“We don’t have to wait for hydrogen,” says Wachsman. “SOFCs represent a solution for everything that you can think of in terms of producing electricity and power today.”

About the University of Maryland Energy Research Center
Located on University of Maryland campus in College Park, Md., the University of Maryland Energy Research Center (UMERC) is dedicated to developing and educating the public about efficient and environmentally sustainable technologies for alternative energy generation and storage. UMERC is administered by the A. James Clark School of Engineering, and includes faculty from all Clark School departments, as well as from the College of Agriculture and Natural Resources, the College of Computer, Mathematical and Natural Sciences, the School of Public Policy, and the College of Behavioral and Social Sciences. With faculty expertise in both energy technology and policy, UMERC provides the research and data to inform the larger policy debate on urgent, global sustainable energy and environmental issues, and the capabilities necessary to establish the State of Maryland as a leader in sustainable energy.