From Mercury to Morocco, and onward to Yale: a meteorite’s tale

Talk about a precious stone — the largest piece of the only known meteorite from the planet Mercury has found its way to Yale, where it is now on display at the Peabody Museum of Natural History.

Known as NWA 7325, the fist-size, greenish space rock is a rarity among rarities:  there just aren’t many verified planetary meteorites. Scientists know of about 70 from Mars and, until now, none from any of the other planets in Earth’s solar system. There are about 180 known meteorites from the moon. NWA 7325 is the first believed to be from Mercury.

“If it’s not from Mercury, it’s from a very interesting place,” said Anthony J. Irving, an expert in planetary meteorites at the University of Washington, during a recent appearance at the Peabody. 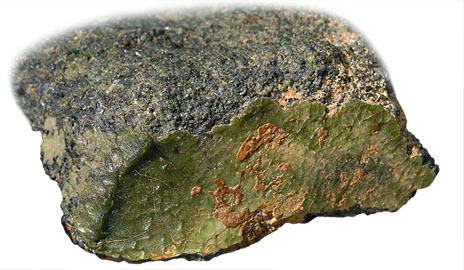 The magnetism of the meteorite formally known as NWA 7325 exactly matches that of Mercury. Image credit: Yale University

The meteorite’s chemical composition provides the strongest evidence that it came from Mercury, a rocky world that is the smallest planet in Earth’s solar system and closest to the sun, Irving said. He noted the object’s high magnesium and chromium content and its low iron content are similar to those of Mercury. Also, the meteorite’s magnetism matches Mercury’s magnetism exactly, he said.

The NWA in the name stands for Northwest Africa. The meteorite was found in fragments in 2012 in the Moroccan desert. It is estimated to be 4.56 billion years old, about the age of Earth. The piece on display at the Peabody was sold to a private collector in Germany, Stefan Ralew, who consulted with Irving.

“This is great excitement for the Peabody,” said museum director Derek Briggs.

A science note: A meteorite is a fragment of an object from outer space that collides with (and stops at) a larger body than itself, such as Earth. A meteor is the trail of light behind an object travelling through space, such as an asteroid or comet.